Inspiration From A Friend

It's something that I've often thought about and wished I knew how, but that's as far as it went.
Thinking about it.

So, not long ago when my good friend Lisa from Two Bears and the Three Cubs did a post about taking cake decorating classes.  After I read it, I scooted her an email.  Responding almost immediately she told me where "in her neck of the woods" classed were being offered.  She then told me how much she enjoyed them and that did it.

I filed the following thought: Research and find a  "cake decorating" class.

Now it's nothing new but being old older can have it's draw backs.  Sometimes, we have so much to file we forget what folder we put something in.

Well, for whatever reason, the folder labelled ME re-emerged today and was pushed to the front.

I am happy to report that a Michael's has recently opened in nearby Mansfield and is only about 6 miles from my house.  Yep, I've been there, inquired and am happy to announce that I am 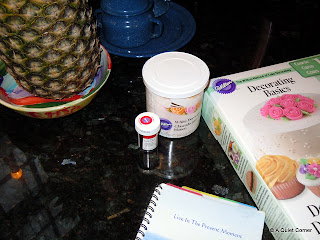 Beatrice P. Boyd said…
And will you be offering samples to all yous blog friends, JP? Taste testing is one of our specialties :-)
February 15, 2013 at 6:12 PM

Jessica B said…
Thanks for stopping by!! Nice to "meet" you :) The cake decorating class sounds really fun - I'd love to do something like that. Great way to combine creativity and yummy fun. Happy weekend! Hope to see you back next Friday.
February 15, 2013 at 7:18 PM

PlumPetals said…
I've always wanted to go to cake decorating class! My baking is good, but my decorating needs a lot of work!! Enjoy :) (Stopping by from Friday Five!)
February 16, 2013 at 12:00 AM

Ann said…
A "ME" folder, what a great idea even if it's just a mental folder (which by the way I wouldn't be able to remember) I learned cake decorating on the job but a class sounds like fun.
February 16, 2013 at 7:09 AM

Mimi said…
Oooh, I look forward to lots of pics from your cake decorating class!
laughed so much at "Sometimes, we have so much to file we forget what folder we put something in."!!

Lisa @ Two Bears Farm said…
That's the same kit used for my class. You'll learn so much. I have a post going up later this week for what I learned in class 2! Hope your instructor is as great as my Debbie was!