Saturday was another wonderful day!  Dashing to the window I was able to capture the official greeters, Moon and Copper, welcoming the guest of honor...my son (who's birthday was last week), his wife and their daughter, Mia.  We were going to have...yep...CAKE! 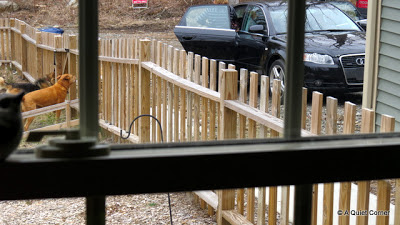 Knowing that this was going to be another fun day, I walked out to greet them in person and was thrilled to have my little four year old grand daughter run to me with the biggest, most beautiful grin ever!  (I still re-play that moment repeatedly...just because!!)

The Pres had planned a special lunch for them.  On Friday he made two pounds of dough in his bread machine and then about 30 minutes before they arrived, he did his magic.  He also, just in case and for what we call "back-up,"made up some kielbasa, cabbage and potatoes. 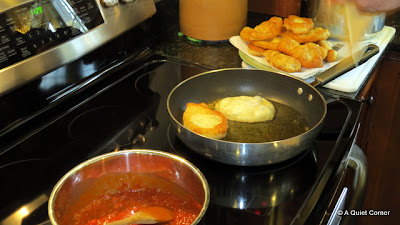 Wishing I could take credit for something going on in this picture, I have to add that I re-heated his homemade sauce, which was total perfection, while the Pres made fried dough.  When he was a kid, his Mom used to wrap dough around an elongated piece of cheese (about 1/4 inch by 1/4 inch by 3 inches) so he decided to do that as well.  We used Cabot's Sharp Cheddar and they were DELICIOUS when dipped in the individual custard cups filled with sauce!!!
Then it was time for the fun!  My son had intentionally asked me for a cake that Mia would get excited about even though it was his birthday cake.  So, I made a triple layer cake...chocolate on the top and bottom with yellow in the middle, separated by a light chocolate mousse filling with white icing decorated with purple, lilac, and pink flowers.  I'd also made up several roses in different colors a few days before...roses that Mia could pick and place on her Daddy's cake along with his candles.  You see, I, too, had a plan! 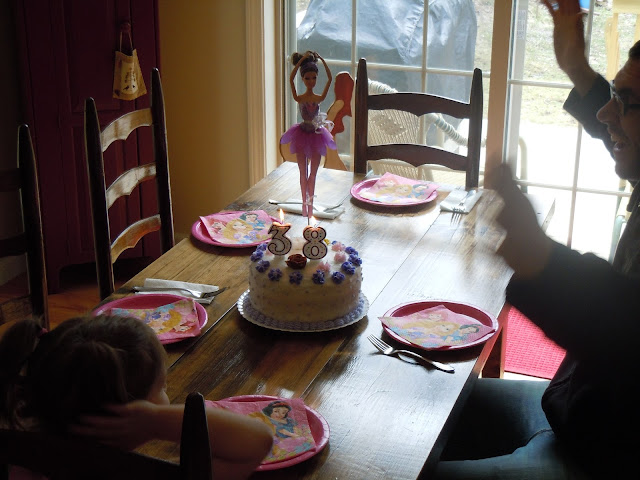 It was perfect!
My plan was to surprise both my son and Mia by placing a Barbie ballerina (her real name eludes me at the moment and who had a BBQ skewer inserted down her tutu secured with iridescent ribbon) into the cake so when they opened their eyes, they BOTH would be overcome with delight!

Ann said…
I love the fact that your son wanted a cake that would thrill his daughter. I see you even had snow white napkins. The cake looked great and I do know what the answer was about Barbie
March 19, 2013 at 5:24 PM

Beatrice P. Boyd said…
Joe cooking up a storm, not a surprise to us cause we experienced that first-hand and deliciously so. The cake was wonderful too and bet it tasted as good as it looked. Belated birthday wishes to both your son and Joe!
March 19, 2013 at 7:08 PM