Sometimes you go somewhere so frequently that it's almost as if you're having an affair with the place!  And I'm beginning to feel that way about a local garage that the Pres uses.

Following the Pres to drop off the Diesel at the garage Wednesday morning, I drove him back home then hit the gym.  Although they hadn't called by the time I got home, the Pres expected work to be done on the power steering pump (or to fix a kinked hose).  That's what they had talked about.

Six hours later, they called.  Come to find out, the old Diesel needed a steering box which he okay-ed readily.  It wouldn't be ready until Thursday morning which was fine.  When I dropped the Pres off at the garage, he told me not to wait, "I'll see you home," he said shutting the car door.

You guessed it.  Home watching the weather, I was snug and enjoying my tea when he called to tell me that he'd be a little while longer as it was on the lift AGAIN!  They explained to him that it needs some front end work too...tie rod end and a couple of bearings.   That will be next week.

Affairs can be expensive! 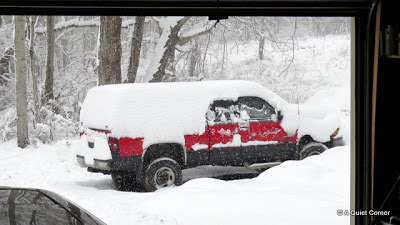 Candy C. said…
Dang, I HATE having to take the vehicles to the garage! It always seems to end up costing more than the original estimate.
March 13, 2013 at 11:27 AM

valerietilsten59.blogspot.com said…
A good post JP.
Expensive date!!!
My car came home from having oil change and new spark plugs and overhaul.. i will be getting the bill Friday.. always something to do on a car.
I see you still have snow.
Its cold here.
happy week
val xx
March 13, 2013 at 11:31 AM