After three Wilton Cake Decorating classes under my belt, I have begun dreaming about decorating!!  Does that mean I'm having fun or am I under pressure?  Why, you ask.

For tonight's class, we have to bring cupcakes with filling of our choice and icing to decorate them.  I am relying on my new cupcake book that I won.
This I am looking forward to!  This is called fun!!!

However, the pressure is beginning to build.

Rhia's birthday was in January so she has to wait until next year.  She, my oldest grand-daughter, is the oldest of the three sisters.  I lucked out.

Kree is turning seven the beginning of March and had requested a chocolate cake with white frosting decorated with one flower.   The middle child, she never asks for much.  Her party is Saturday.

Tess is turning six the beginning of April and has requested a chocolate cake with chocolate frosting decorated with a picture of her, her name, a picture of her best friend and her name.  I was told that they should be "holding hands and in the other hands holding flowers and that Shelby's hair is brown and to her shoulders."  She also wants the cake to be surrounded by cupcakes.  She is the youngest of the three sisters.

My son also has a birthday mid- March and although he originally wanted a "rain-forest" cake, he has changed his mind and wants something that his daughter, Mia (age 4) will get excited over.  He asked me to make a "princess cake...you know Mom, one with pink and purple flowers that Mia will like."  So, I'm making a "Princess Cake" with a Barbie doll in the middle!  Heaven help me!!!  However, my son is easy to please...:)

The Pres also has a birthday in March.  He doesn't really like cake but he's getting one anyway...something with pineapple filling he said.

My daughter's birthday isn't until July.  She wants a cake decorated with "bouquets of roses"!!  She is the oldest of my two children and loves to put me under pressure!!  LOL!


This is only the beginning, I fear!! 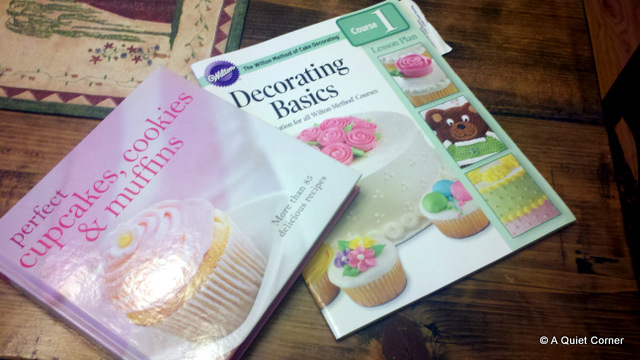 And you thought I was going to say

Sharing my cupcakes with you and everyone at 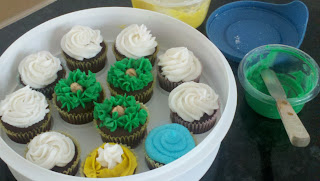 (a pic I took after class)
Some were filled with a fluffy white creme
and others with a light cocoa creme filling
and they are DELICIOUS!!!!
Email Post
Labels: Baking Family Fun

valerietilsten59.blogspot.com said…
Well dear JP:
you will sure be busy this month.
I can see you are enjoying it all.
looking forward to seeing more photos of the birthday cup cakes for your grandgirls and the other cakes.
take care
val
March 7, 2013 at 6:58 AM

Candy C. said…
With all the birthdays coming up, you should be a pro by the end of April!!
Your son wanting a princess cake for his daughter cracks me up!
Your cupcakes look yummy, wish I had one with my coffee right about now. :)
March 7, 2013 at 7:51 AM

MTWaggin said…
Holy crap is right. You are one amazing woman, I certainly couldn't pull all that off and would indeed be calling the bakery!
March 7, 2013 at 9:50 AM

Ashling said…
You'll be on Cake Wars before you know it! It may be pressure, but sounds like fun pressure (the two aren't necessarily mutually exclusive). Enjoy!
March 7, 2013 at 9:53 AM

gld said…
My MIL took those classes and made some wonderful cakes when the grands were young.

Gina Gao said…
It seems like you have a lot of things on your plate this month.

Judith @ Lavender Cottage said…
A couple of good books to have on hand. I took cupcake decorating (not Wilton though) and loved the 2 sessions. I did not get into filling the centres, sounds like a plan to try for my next batch.

On Crooked Creek said…
JP,
What a brave soul you are to tackle cake decorating!!! I attempted once to pipe some icing on cupcakes...then decided to leave that to the professionals! Ha! Good luck, hard work and much success with your endeavors!!!
Fondly,
Pat
March 8, 2013 at 7:48 AM

Mary said…
Gosh, I think I gained five pounds just reading this! Your cupcakes look wonderful, and I'm sure you will be very graceful under all the pressure. :)

Thanks for contributing to Thursday's Inspiration. xoxo
March 8, 2013 at 8:25 PM