We've been home a week and I'm still not caught up.  I decided that there's no way I can read all the blogs and their daily posts, so I'm starting fresh this week. I do apologize yet I know some you of have "been there, done that".

Monday, while I was at the gym, the Pres went to Cheshire to do some tree cutting for his friend Paulie, owner of Zentek Farms.  Much to my surprise, he brought home a few leftover plants.

Twenty two pots of Easter Lilies...yep twenty two!!  I planted those Tuesday afternoon before I went to Tai Chi, along with a flat of loose Daffodils.

I thought I was done and truly had a sense of accomplishment.

Then on Wednesday morning after I returning from the gym, I was sore which I'm sure was due to hitting the gym, planting, Tai Chi, then the gym all in a row without giving my body a rest.

But that pain vanished rather quickly when I saw more Daffodils waiting outside the garage door.  Ten flats to be exact...each containing sixteen to twenty plants.  I got out the pick ax to make a trench...well several trenches...then hit the dirt, trowel in hand! 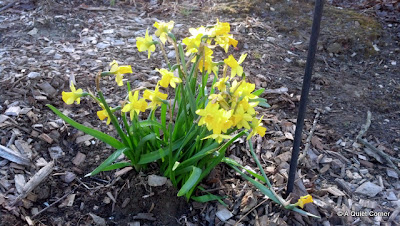 I planted a bunch near the birdbath to make the bathing birds feel more at home.  There's nothing like that "au naturale" feeling when bathing! 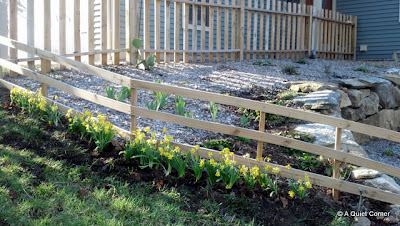 Then I thought they would look really adorable if I ran them along our little fence. 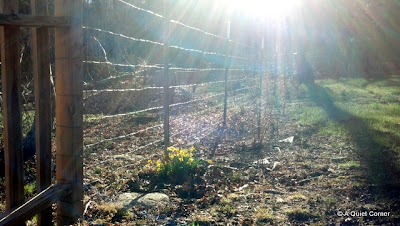 A small bunch at the base of one of the bluebird nesting boxes would make them feel welcome, I thought.  They like flowers too, you know! 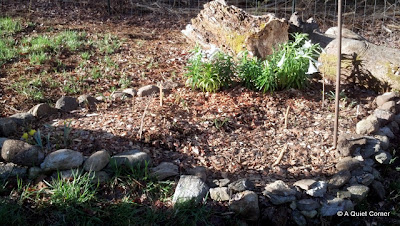 Of course, the lilies were placed in the small beds bordering the woods.  It will be moist there for them to enjoy the morning sun and afternoon shade. 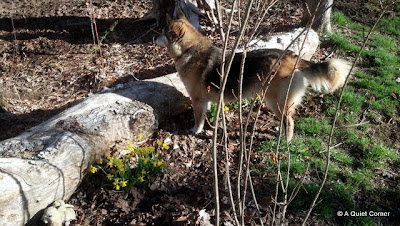 As I crawled around on my hands and knees filling the trenches, Moon and Copper were at my side and I specifically instructed them to "stay out of Mommies garden" each time I finished another patch. 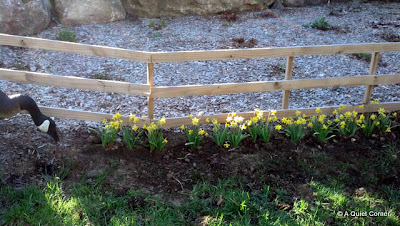 And since I still had several flats left, I dug another trench and put them in front of this other section of fence to match the one on the hill I'd done! 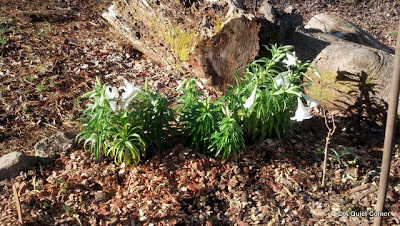 Yep.  I dug and planted...and planted some more until all the flats were empty.  Then I toured the yard to see what I'd accomplished. 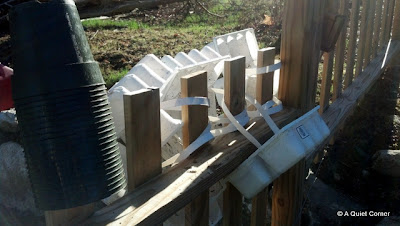 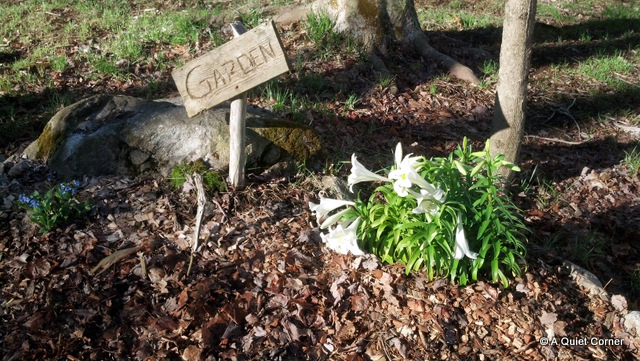 Apparently Moon thought so too!! 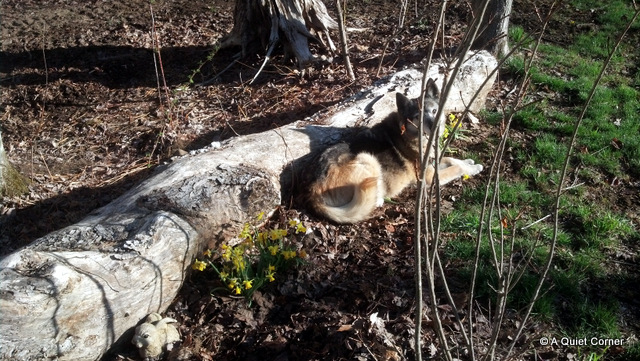 So much for dogs that listen!!!

Sharing another piece of life with you and

MadSnapper said…
that is a lot of flowers! it will be gorgeous, of course that depends on who lays on what.. BOL
when i take time off my blog, i just start fresh, time off means i don't go back in time.
April 21, 2013 at 6:29 AM

Anonymous said…
Wow...if you thought you were stiff and sote before, just wait until tomorrow. They do look lovely though.
April 21, 2013 at 7:30 AM

Ann said…
wow,that sure is a lot of flowers and a lot of digging. I probably wouldn't be able to move after all that. I bet Duke wouldn't listen any better than Moon did...lol
April 21, 2013 at 8:57 AM

Valerie said…
Congrats on your persistence, patience and perseverence - the end result is wonderful.
April 21, 2013 at 6:20 PM

~Kim at Golden Pines~ said…
Each year I think I'm going to plant a lot of flowers/bulbs and each year I don't. Maybe next year, or is that later this year? ;-)

By the way, I totally understand about catching up on blog reading--I do the best I can, but there are times there just isn't enough time in a day to do it.
April 21, 2013 at 6:39 PM

MTWaggin said…
How nice of you to till up that nice cool dirt for Moon! LOL You will have such a blooming wonderful yard!
April 21, 2013 at 7:28 PM

Magical Mystical Teacher said…
Shadows from someone's backyard garden are the very best of all!

Chubskulit Rose said…
Your model and helper is gorgeous!