Although we had planned on heading to my son's around 12:30pm, I had to take a nap before we left.  Busy all morning, making lasagne and crab salad, I was simply tuckered out.  Right after I got comfy on the couch and pulled the sheet over my head, I heard the knock at the door.  It was Corey who greeted me his usual smile and twinkling eyes with, "Okay, Miss nature extraordinaire.  Come with me.  I found the nest."

Bouncing up and grabbing my raincoat from the coat closet and putting on my garden shoes, I grabbed "zoomer."

Pointing out the nest, Corey told me that it was at least 110 feet up the pine.  Located in the upper third, I couldn't believe the size of it.

The rest is history, folks.  It is a nest.  The eagles I've been watching on and off since last year made it official.  I'm sure we'll be seeing a lot of activity once the eaglets hatch and you know I'll keep you posted.  I've also decided to document the dates and times of their sightings...just a personal thing. 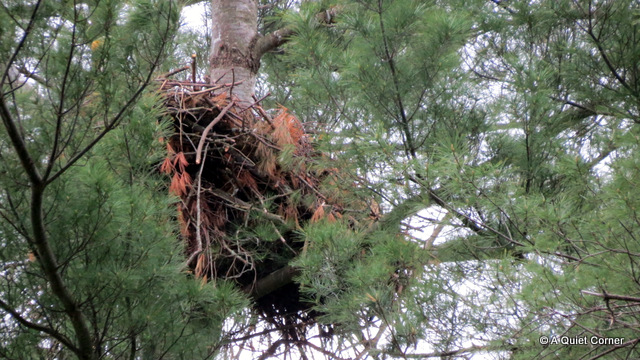 I apologize for the "blur" on the photo below..it was raining and as I stood under the nest gazing up, I felt like I was going to tip over backward.  Since Corey is like a son to us, I asked him to brace my shoulders so I wouldn't fall over!!  But, as usual my exuberance got in the way and I forgot to wipe the raindrops from my lens!!! 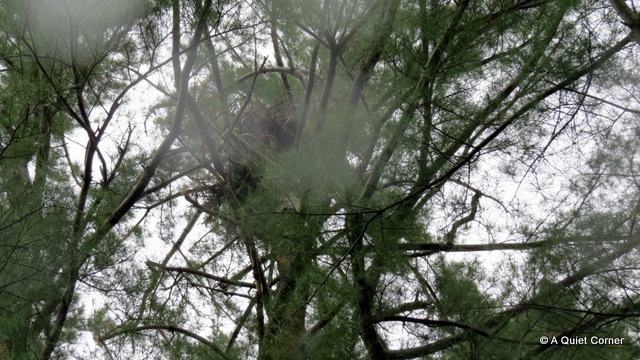 Then we left the forest, just as we came but I have to admit that it made me feel special...not because I spotted them but because they were nesting right next door to us!

Now, lets hope that they return each year.

What a Mother's Day Gift!!!