As my coffee was brewing, I peeked at the flowers sitting in the box.  The Daffs really looked adorable and seemed to have darkened a little (heaven only knows why!!) and I was really, really excited with the lilies.  They looked perfect!

Waiting until after I'd had my coffee and enjoyed my morning walk with the dogs, I decided it was time to remove the foil from the lilies.

First one petal broke on the first lily and I thought I would simply glue it back together.  I mean who the heck would know?

The second lily had even more of an issue.  Two petals broke near the base.

Well, after they were all tossed into the garbage I knew it was time to reach out to my friend, Lisa of Two Bears and Three Cubs
for HELP!!!

She's good at EVERYTHING.

I sent her an email asking what I did wrong.

Broken Hearted over Broken Lilies"
(all of them)

Lisa responded quickly and with the explicit detail I expected.
Always make extra...just in case of breakage, their instructor had told them.
Let them dry for days was another hint.


For our final class, we had to once again make a cake and plan to decorate it in class.  A yellow cake, with the strawberry filling I made was then iced (top and sides) ready for the finishing touches. 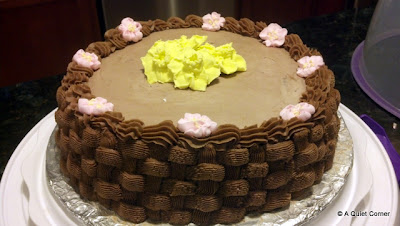 Beatrice P. Boyd said…
Ok when are you serving this wonderful looking cake, JP and we can bring the coffee.
May 3, 2013 at 7:19 AM

Unknown said…
If it makes you feel any better, our outside flowers are now covered with an inch of snow, and it is still coming down!
May 3, 2013 at 3:46 PM

carol l mckenna said…
The cake looks beautiful and bet it was delicious ! C'est la vie ~ and you are blessed in so many ways ~ Enjoy!