Returning home from the gym, I noticed there was a message on the answering machine.   Although I listened carefully, it didn't make much sense and the Pres was no where to be found.  When he came in he listened attentively to the recording as I saw him jotting down the details.

When I began to ask questions, he immediately put this in front of me. 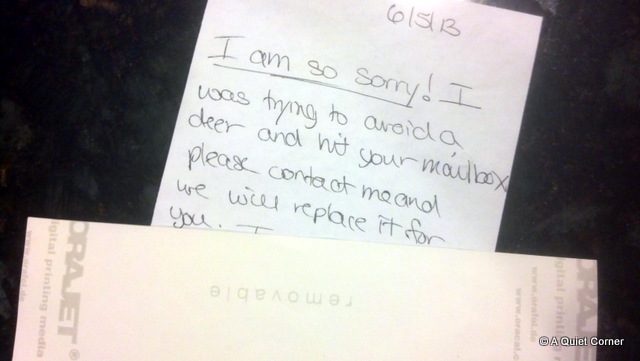 Apparently, he had received a call from Nationwide Insurance that morning asking him if he was "Mr. So & So" and once he responded yes, he was told that there was a note in our mailbox from their client.  The representative gave him a claim number along with other necessary information to submit the claim.

Of course, this is what he saw BEFORE he got to the note! 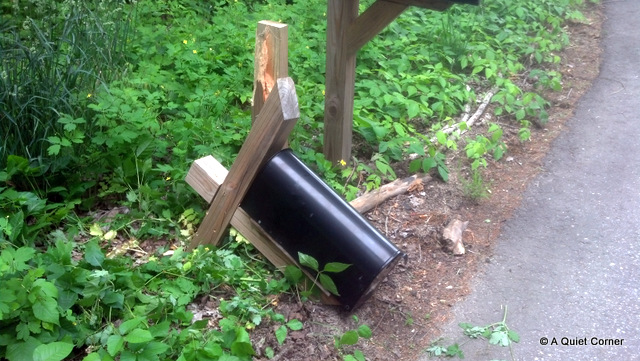 To tell you the truth, I was really really impressed that the driver even left a note.  It's nice to know there are honest people around!
Email Post
Labels: Connecticut Critters Vehicles

Ann said…
that is impressive that the driver left a note. So many people would have driven off and said nothing
June 11, 2013 at 3:57 PM

Candy C. said…
Yes it IS nice to know there are people still willing to take responsibility for their actions! My first thought on seeing the mailbox would have been teenage vandalism. That's not qood to be so quick to judge, bad me.
June 12, 2013 at 1:56 PM