Anxious to have a cookout using the new deck and screen house, we decided that Fathers Day would be the perfect time to break it in. Mother Nature had dumped tons of rain here in Connecticut and although the yard was still wet in spots, that Sunday, we were blessed. It was overcast, a tad humid and in the low seventies...a beautiful day! 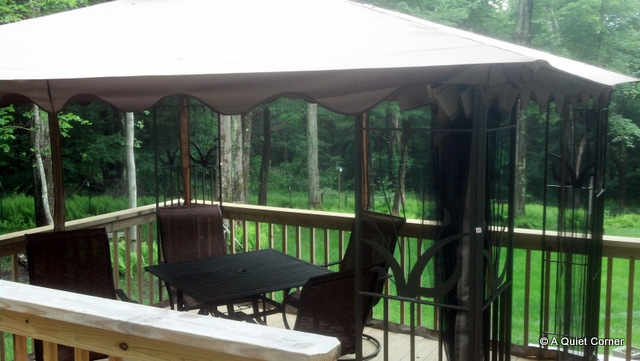 Getting the kids here all on the same day was the real challenge, since they all work and have lives of their own. Some work nearly every weekend with days off during the week, some have weekends off and work Monday through Friday. Some work days, some work nights but we managed to get three out of four families here.

Of course, while we prepared the few days before, Moon and Copper laid low. They needed their rest since they would be kept busy by the three girls.

All was going well until my youngest step daughter came rushing into the house with her youngest saying, "Copper bit Tess."

While the little one was now resting in the house on the couch with her big sister, I went back outside to join the others. I was upset.

It was shortly thereafter that my step son-in-law decided he wanted to shoot his rifle, which he brought with him to a family gathering expecting to target practice in a yard full of people. (Can you tell I was annoyed about that just by the way the sentence came out!!?) Anyway, announcing that he was ready to move the targets in the yard and shoot, I lost it. "Honey, you know how I feel about target practice close to the house." The Pres responded quickly and firmly, "I'll take him over by the trailer...don't worry."

Does anyone else worry about ricocheting bullets besides me when I have children and adults around? When I took my gun safety course, I took things seriously which is the attitude of the Pres as well. We are gun owners...responsible gun owners and safety comes first regardless of who wants to shoot where.

To make matters worse, Copper totally cringes and shakes when he sees a gun, let alone a semi-automatic. That was the icing on the cake for me! As I saw him crawl under the table cowering and shaking, my heart broke. Watching my three grand daughters walking around blocking their ears, it was then that my daughter suggested that both Moon and Copper be placed in the basement away from the sound of the firing bullets.

While shots were being fired, I got the details...sort of...because no one really saw what happened. After playing, Copper had gone under the deck which is a small, cool, shady, cave-like atmosphere with his stick to lie down. Tess went in after him. Of course, Tess wouldn't talk about it so none of us really know what happened.  That in itself makes me wonder. 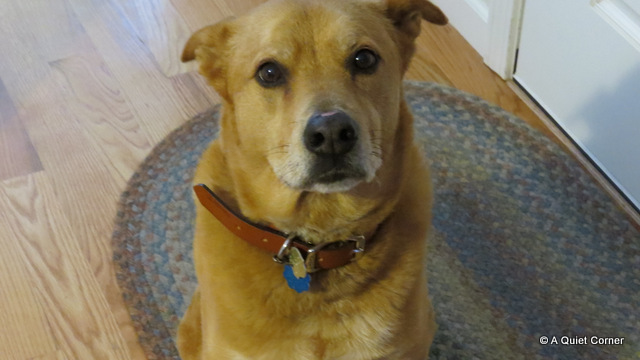 While trying to enjoy the company and conversation, my mind just wouldn't shut off until one thought surfaced. The Pres, kept saying "Honey, you know that old saying...let sleeping dogs lie she should have left him alone. He went under the deck to get away from the girls and be left alone. If Copper meant to bite her...wanted to bite her...his jaws could have gone right through that little arm."

Yes, it was unfortunate. Yes, it was traumatizing to Tess. But, it could have been a lot worse and thankfully it wasn't!!

Although it took about an hour before Tess would come outside to be with everyone else, I think everyone learned a few lessons. Well, I hope they did.

Exactly what is RESPECT? Can someone please tell me because I'm not so sure any more.

Oh, one more thing. In speaking with my step daughter since, Tess is fine. Dog-less, she is going to try to teach her kids on how to behave around dogs. Don't go after them. Let them come to you.
Email Post
Labels: Connecticut Copper Dogs Family Fun Holidays Home Improvements Memories Moon

MTWaggin said…
The Pres is a very wise man and very right, little children and dogs rarely mix well especially if you can't keep an eye on them all the time. Now let it go and yes, how irresponsible can a male be to think it is "okay" to bring a rifle and do target practice right at the house? Sigh.....
June 22, 2013 at 8:26 PM

Nancy C said…
The boys like to come over to target practice now and again -- but know that it's only to be done far away from the house in an area especially set up for it.

Ann said…
Well it started off sounding like a very relaxing kind of day but oh my things turned quick didn't they.
The pres is so right about letting sleeping dogs lie and it's something every child should learn early on
June 23, 2013 at 1:45 PM