I hadn't been in the woods all week because of being at the hospital several times a day with the Pres, so Friday afternoon when we went home for a few hours, I headed in to watch the eagles, hoping for some "down time."   Although I couldn't see the chicks, one of the pair returned to the nest carrying something in it's beak followed by tons of squawking.  Darn, I wish I knew how many chicks there were!  Finally after they settled down, I fold up my green chair and placed it in it's bag.  Slinging it over my shoulder, and holding the binoculars aside, I began to walk out of the woods.

A noise up ahead took me by surprise.  It was only a doe crossing my path.   Then just as I was about to round the corner, there she was right in front of me gazing up but in no hurry.  In fact she took her time...long enough for me to turn on the camera, remove the lens cap and snap this.  She was moving sooooo slowly!! 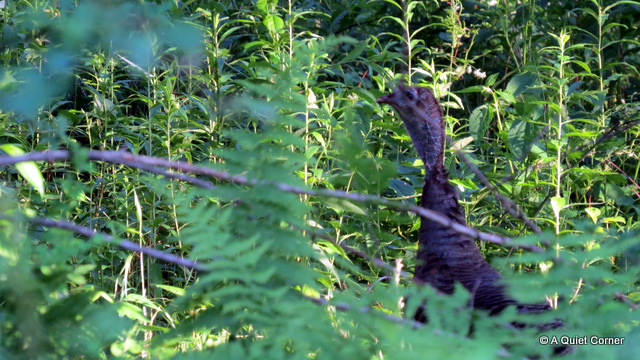 While watching her, suddenly the tall grasses and ferns came alive scaring the heck out of me.  All her chicks were scurrying around my feet...all heading toward their mom, waiting patiently.  It was so adorable and now I understood why she was waiting.  I continued on home, thinking about my MIL who has such a big heart and gave so much of herself all the time.  Then my thoughts shifted to how much the Pres would like this story.

Surprised to see the Pres near the gate as I trudged through the tall, wet brush, I smiled and said, "wait until I tell you about my adventure!"

"We'll, I have a story too," he said but the look in his eyes was not good.

"Uncle John (my MIL's youngest brother 85) went to the hospital with Barbara to visit Mama," he began. I didn't like the sound, the tone, the eyes...none of it.  Continuing he said, " He was standing near Mama and he began wincing, then sweating so the girls had him sit down. He was cold and clammy and in pain.  He had a heart attack and was admitted."

As the chair slid off my shoulder, I leaned in to hug the Pres.  Exhausted emotionally and physically, all I could say was, "NO! It can't be...not Uncle John...not him" over and over.

Yes "Unc" had a heart attack.  However, as of today Uncle John is fine.  He had emergency surgery Friday night, looked wonderful yesterday and is slated to go home Monday.  Thank God!

My MIL passed away last night shortly before midnight.  We were not there for her last breaths.  It was too painful for the Pres to watch her struggling to breathe.  There's a thing known as dignity and we both felt more comfort in knowing we respected her wishes.  She is with Dad now, holding hands and dancing up a storm.

Thank you from the bottom of my heart all for your kind thoughts and prayers.

Sandra said…
so sorry to read about your MIL and Uncle John, and glad he is OK.. you had a wonderful experience just before you received more bad news.
June 23, 2013 at 8:40 AM

Beatrice P. Boyd said…
Sorry to learn about this new sadness of Uncle John's heart attack, JP, and relieved to read further that is recovering well.
June 23, 2013 at 9:21 AM

Florida Farm Girl said…
Uncle John was right where he was supposed to be when that heart attack happened. That's why he's okay now. I believe that with all my heart, 'cause Daddy and my brother both had very similar experiences. Daddy is now gone, but my brother is hale and hearty with no residual damage. My condolences to you and your husband on the loss of his mother.
June 23, 2013 at 11:45 AM

Inger said…
I am so sorry for the loss of your mother-in-law, please convey my condolences to the Pres. I'm glad uncle John is OK and also glad he was able to visit his sister before he became ill.
June 23, 2013 at 12:05 PM