Standing at the edge of the overgrown trail I peered out to see if I could see any activity at the eagles nest. With the woods in full bloom and so thick with leaves, the canopies that hide the nest are too thick to see through.  It was raining and around 7pm.  I stood motionless and undetected by the eagles.

Scanning the nearby trees for one of the pair, I heard the cry as the mate neared the nest. Although I do not know how many chicks are in the nest, they should be fledging any time now judging by the behavior of the pair
.
I had tucked my camera in one of my chest pockets which are deep enough to protect it from the rain...thank goodness.  My binoculars, draped around my neck because I find that watching them has become more important than picture taking. I could tell by the clam demeanor of the eagles letting out an occasional chirp to each other that I remained undetected.

Looking up, I spotted a deer on the far side of the clearing who had apparently spotted me. Looking at me quizzically, it watched me intently moving it's neck and head almost continuously side to side.   After a few minutes, the young buck began pawing the ground repeatedly. Then he began snorting...blowing...snorting...blowing. I wanted to say, SHHHHHHHHH, you're blowing my cover!! 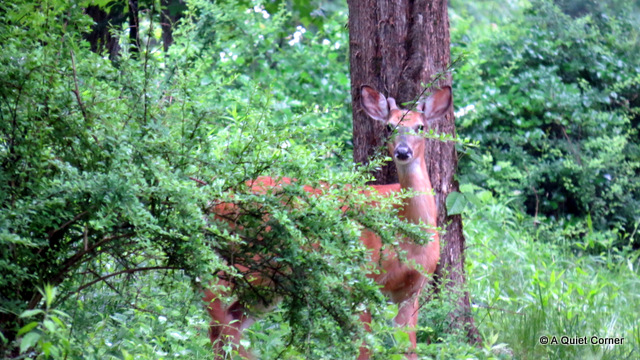 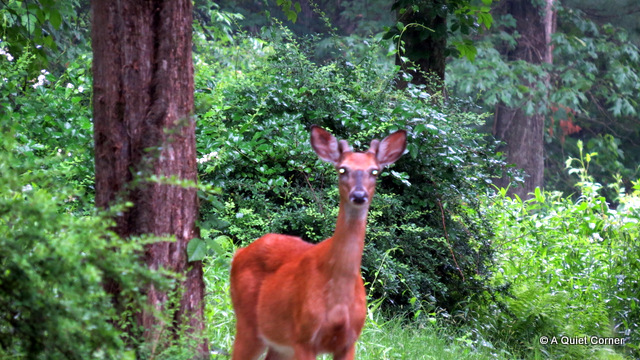 His tail went up and he darted off into the nearby thicket. The eagle, now aware of my presence, descended from the sky and landed in the tall dead pine not far from the nest.  It let out a warning to the mate who also came in for a landing at the nest hidden behind the surrounding tree branches.

Talk about a nature's alarm!

The jig was up.
Exit stage left...LOL!
It was time for me to walk back home in the driving rain.

Sharing another piece of my life with you and

Inger said…
What a wonderful experience. And I am so glad you started to write again. I loved the stories you used to share from the hollow and from your childhood.
June 20, 2013 at 12:55 PM

gld said…
Beautiful pictures. I love the woodsy look. It seems as if you are miles from civilization.