Well, truth be told, as nice as I am, I would NOT make a good Buddhist.

Recently, while at Tai Chi class, our group was engrossed in doing our "form" which consists of a series of moves.  After we finished, as my center of focus ended and while we were breathing deeply, I noticed a bug making it's way across the floor.  Drawing in my last breath, I left my position and stepped on it.  My actions drew the attention of my instructor who said, "JP, you would not make a good Buddhist."  Did I feel bad?  A little but I didn't loose any sleep over it.

Apparently, HOWEVER, I should have done differently.  This is our second summer in the house and things have certainly changed around the yard.  We have a lawn.  We have perennials that have adapted so well here.  Our nut trees have taken hold along with several other shrubs like our Hydrangeas, Clematis, Jesamine Vine, Boxwood, Smoke Bush as well as our Strawberry Bush!

Here comes the HOWEVER.

There's always a however in home ownership...always.

Now although our yard has changed for the better, we also have our challenges.  You see, we have young centipedes that greet me each morning on the patio.  I don't mean one or two or even ten or twenty.  I'm talking hundreds...maybe thousands, folks!!  I've become so accustomed to them, all I do is step on them by doing a little dance then sweep away their dead, squished bodies.

My tactics, HOWEVER were just not good enough for the Pres.  He mixed up some concoction and sprayed all around the base of the house.  The next morning, this is what I saw or should I say, this is what I was greeted by.   I'm writing this today (Friday) and it's been going on each morning for at least a week! 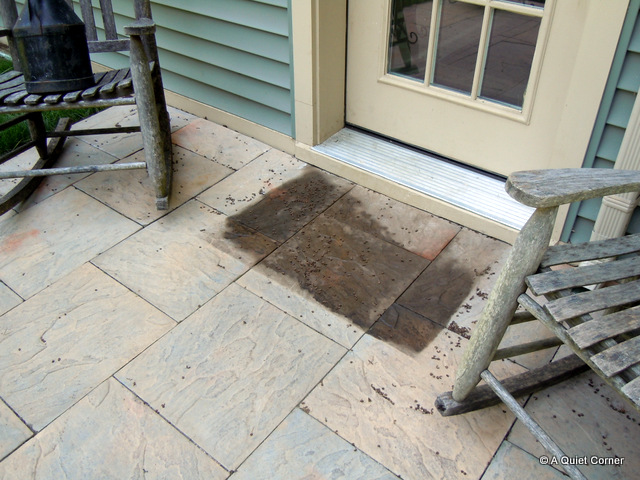 What you see is NOT a door mat.  It's where the doormat was!  See the next pic where I zoomed in?

Some morning are worse than others and it's really, really gross.

I find myself, when sitting the rocking chair, looking for them as they make their way out of the cracks, then as they inch their way closer, I just...well, you know. 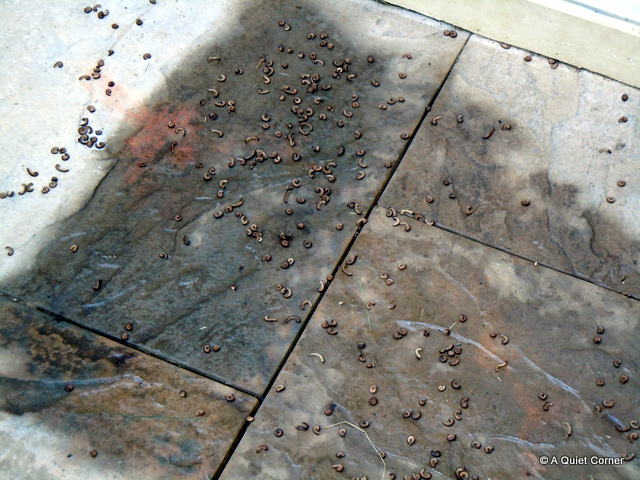 Well, now that you all feel crawly and grossed out, you all know HOW I FEEL as I sweep the dead little critters into a hole, then step on them just to make sure they're dead!!!!

Nope.  I would not make a good Buddhist.

MadSnapper said…
yikes.. and i would not make a good Buddhist either...the only good bug is a dead bug for sure and you have more than your share... never seen anything like it.
July 26, 2013 at 8:53 AM

TexWisGirl said…
i've got roly-polies, scorpions and wolf spiders making their way under the doorway into the house like mad. *sigh*
July 26, 2013 at 10:02 AM

Tina Fariss Barbour said…
I try to let them be outside, but if they're in the house or trying to get in the house--well, I would not make a good Buddhist, either. I've never seen centipedes like that. Good luck in getting rid of them!
July 26, 2013 at 10:50 AM

Ashling said…
LOL! First, someone who would tell you that you wouldn't be a good Buddhist isn't gonna make a good one either. Second, this is totally the year of the millipede (although 2009 was worse). I'm a bug killer. Linda rescues 'em, I flush 'em. Thousands? Blech!
July 26, 2013 at 6:39 PM