As I walked around the house talking on the phone to my sister, as usual I peeked out the front door to see the nesting Phoebes. "Sis, let me go...I've got to get hubby." Poking my head out the slider, I hollered to the Pres, doing the crossword, "Honey, come quick!"

Telling him what happened as he approached the front door, he went into the garage to get the old six foot ladder as I stared out the open door gazing at the fallen lying on the walkway.

So sad. Two had fallen. One was totally motionless.  One appeared to have survived. Then more bad news. When the Pres went to place it in the nest, he discovered that the other two chicks were dead. One got his head caught behind the siding we think and the other was just draped over the edge of the nest.    After removing the two dead chicks, the Pres placed the survivor back in the nest.  Now alone, he huddled in the corner.

Both Mom and Dad stood fast perched on the fence as we worked to put the little one back and dispose of the three. "I hope they don't abandon the little guy," I said to the Pres. 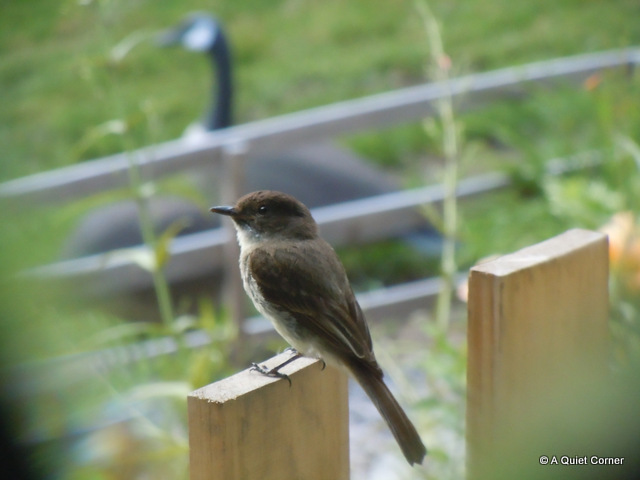 All while we worked, the parents remained nervously on the fence.  Then shortly after we went in, this one went to the nest and bringing the chick a big fat moth. 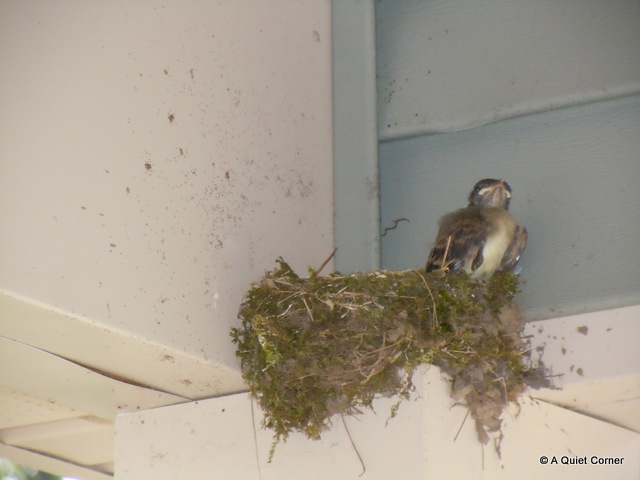 Oh, one more thing.  As I write this out on the deck, the eagles are chirping up a storm with the young fledgling.  Perhaps hunting and or flying lessons.
Email Post
Labels: Birds Family

Jonell w Harrison said…
Following from Like Grammas House via Katherine's blog hop..looking fwd to getting aquainted through your blog..See you again-SOON

Mimsie said…
Following on from Delores' blog. Fingers crossed for the remaining baby bird. Nature can be very hard for all creatures, great and small.
July 11, 2013 at 9:12 PM