Exactly one week after the young eagle gazed at me taking pix of it's nest, my left side was feeling good enough to breathe and breathe deeply if necessary.   I had sneezed several times and was even able to let out a little cough so I announced to the Pres, "I'm going in the woods."

It was yet another 95 degree sultry, hot, humid day and I knew the mosquitoes would be all over me so I literally covered every square inch of flesh.  Spraying my clothes, gloves and boots with bug spray, the camera and binoculars draped around my neck, I began my trek through the woods.  To me it seemed like the weeds and grasses had grown yet another foot in the week since I went in.  They now reached my shoulder as I brushed them back to pass.

My breathing was good and the pain was minimal as I thought,  it's all worth it.  This job of watching the nest was right up my alley and yet I knew it would be over soon.  Stepping out onto the outer edge of the clearing, I aimed my camera in the direction of the nest.  Click. 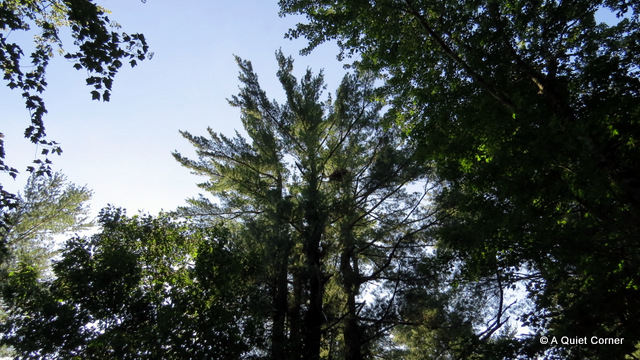 Once home I zoomed in and cropped.

There it is...sitting on the branch OUTSIDE the nest!!!  That, my friends, is called branching, according to Kate at DEEP.

Outside the nest in just a week meant it would be flying any day.

Unable to contain myself, I took a deep breath and zoomed in as far as I could with zoomer. 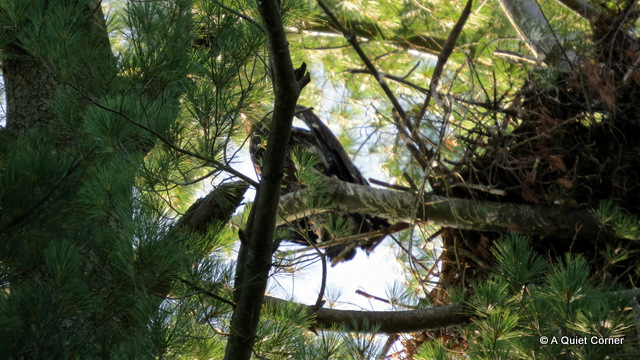 It was then that the rascal took three small steps to it's right and was now behind the surrounding pine branches watching me watch it. 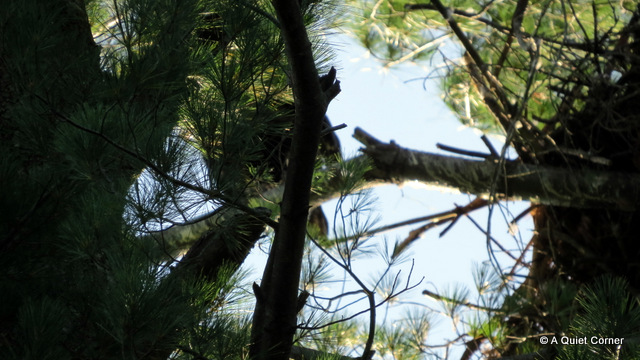 My desire to see more made me then take three small steps to my right just enough to see it once again. 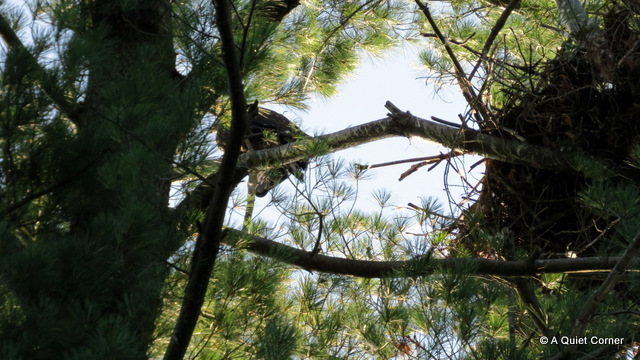 In speaking with Kate from DEEP, she'd told me how before fledging, a young eagle will jump, hop and flap.  That's just what the young one did...hopping, jumping and flapping along the limb of pine. 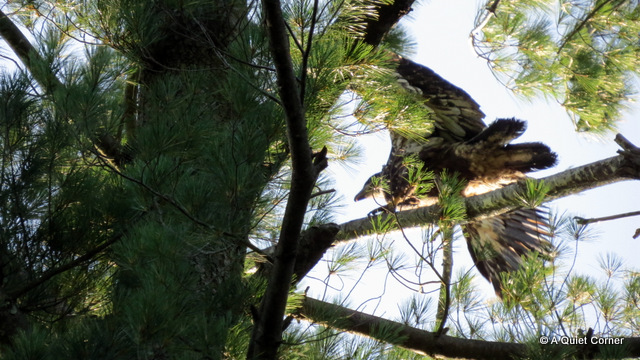 All this progress in a week!

Hearing an adult in the distance, I turned to head out.

Anxious to show the Pres, I said, "Pour me a drink and wait until you see what I have to show YOU!"  Sipping my cold beverage as the ice cubes danced in the glass, I thought,

It won't be long now.
I'll be seeing it soar over our treetops as it's parents do.

Anonymous said…
Thank goodness you were well enough to get out there and capture such a special moment.
July 10, 2013 at 7:58 PM

Anne Payne said…
How exciting to be able to watch such a magnificent creature and get these fantastic photos! Hope you are fully recovered soon.
July 11, 2013 at 10:07 AM

Mimsie said…
How wonderful to be able to enjoy the fledging of a young eagle. They are magnificent creatures. We in suburbia don't have the benefits of country life. more's the pity. Your photographs are really great. Thanks for sharing.
July 11, 2013 at 9:16 PM