Many of you have asked me to show you what I look like when I go into the woods to spy on the eagles. I am happy to tell you, that I finally remembered to take a picture of myself and will show you that soon enough...but not today. We have more important things to talk about and see besides ME!

Tuesday, the 23rd, it was hot and humid...again and while sitting on the deck, I could hear so much squawking and chirping going on in the woods that I just couldn't stand it!

Arriving at the edge of the clearing, the first thing I saw was the adult take off from the distant pine and fly in my direction. Not a great shot, but it happened quickly, so I hadn't even fully extended the lens on zoomer yet. 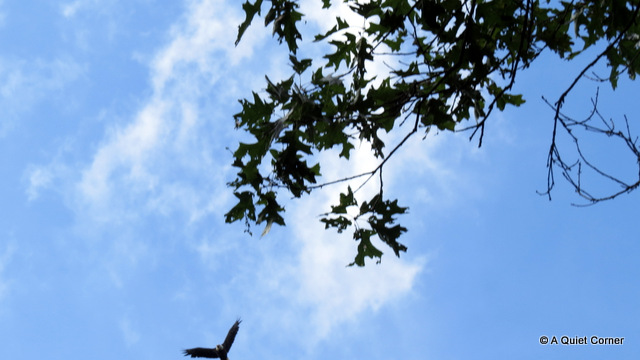 As my eyes followed the adult circling off to my right sounding the alert, another bird...YEP...the immature...followed suit!!  I was so excited and happy to see that it had fledged!!! Not flying as gracefully as the adult, it followed the adult like an obedient child, cooing and chirping in the blue sky. 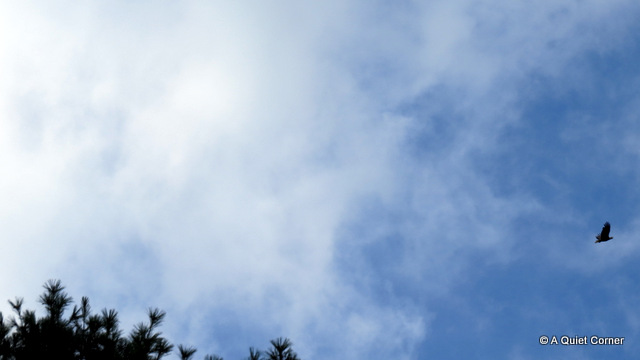 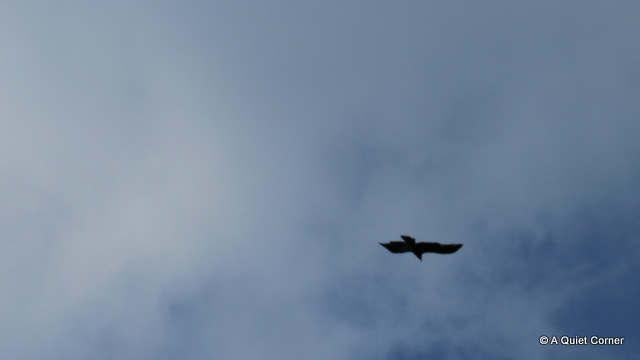 Thrilled to see that it had finally fledged, once again I snapped quickly trying to follow the birds as they expanded their circle. The adult was relentless and seemed bound and determined to chase me off.  It didn't soar too far or too high the entire time.

Since I was now out in the open, I looked toward the nest because I heard chirping coming from that direction. Thinking it was the mate, I zoomed in even before I had the lens aimed in the right direction. It wasn't the mate!!  It was a SECOND immature, not yet ready to fledge! 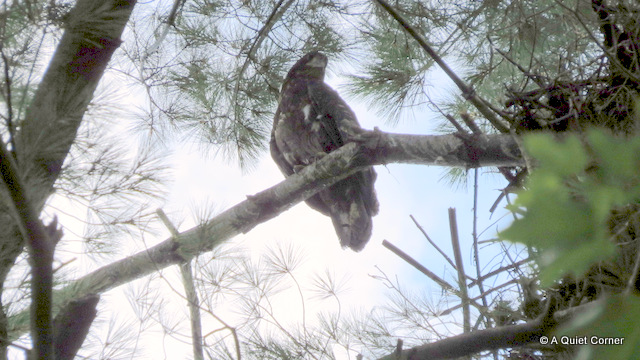 Early the next morning, I emailed Kate at DEEP telling her to change our count from ONE to TWO! And now I understood why there has been so much chatter and kibitzing going on.

Did you know that adult eagles will withhold feeding their young to coax them to fly?  She was thrilled to bump up the count for Connecticut's reported eagles and gave me some sound advice in preparation for next year.

Making my way on the trail home, I continued to hear and see the adult circling above. It escorted me all the way home...sweet!!  I am hoping my short visits do not affect their decision to nest here again in February.

Later that afternoon, while the Pres and I sat on the deck, after looking at the pix, the adult flew over turning it's head quizzically  peering down on us as it usually does.  One immature followed. I am sure that in a matter of days, we'll be seeing one adult and TWO young ones following just for the next month or so before they leave for adventures of their own!

gld said…
What a great experience for you all!

We always love to watch the Red Tail hawks when we mow. We have followed them from snatching food on the ground to the direction we assumed the nest was, but we have never actually spotted the nest or them feeding the young.
July 31, 2013 at 4:27 PM

Inger said…
Absolutely thrilling. Imagine moving back to Conn. and getting neighbors like these. I'm so happy for you.
July 31, 2013 at 7:14 PM