Calling a few days earlier, my son said he'd be arriving in the morning.  The sausage was already cooking on the griddle before the Pres got up.  Eggs, toast, pancakes and OJ were all done to perfection as the three of us dove into breakfast.

Closing the door to the garage behind him, my son said, "Mom, come on outside and keep us company while we work on the car."  Cleaning up the kitchen quickly, I was not going to miss this opportunity.  The Pres and my son were going to "do the brakes" on his wife's Audi which would take an hour, they said.

I am not a negative person but all I thought was heaven helps us because I knew the truth.  It had been at least fifteen years since the Pres did any work on disc brakes.  But, as luck would have it, I will admit as I sat in the folding chair observing, it was really quite entertaining.  The conversation went something like this (although I have left out several choice words).

"Use this hammer and hit it harder."

"How the blanket-y-blank do I know!"

"Isn't there another size in the kit?" 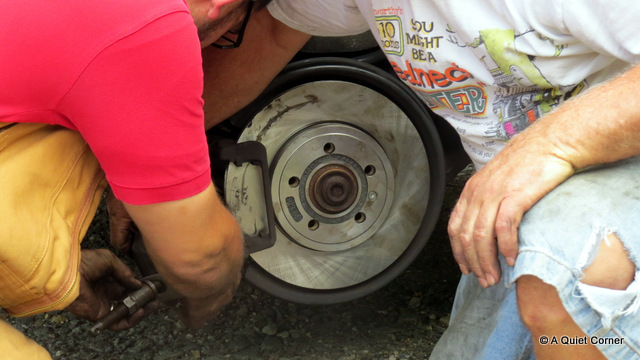 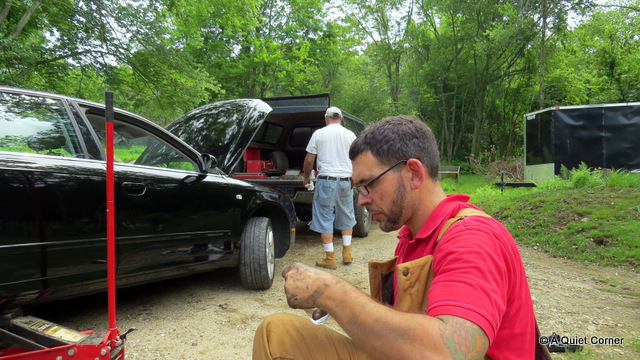 "This one has too much play."

"Take that piece off.  What's it for anyway?"

"I have no clue.  Did the other wheel have one?"

"Boy, things sure have changed!"

"Don't worry, we'll figure how to put it on when we're done.  Just set that piece aside." 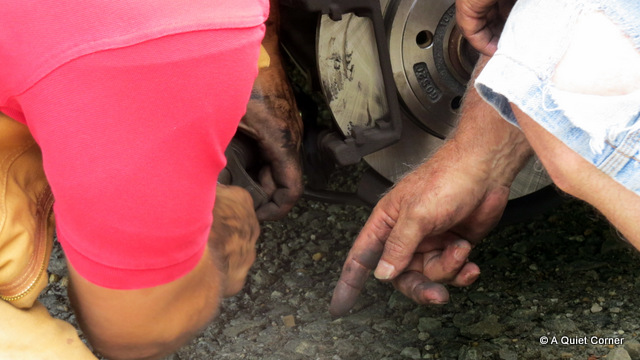 Now I don't know about you but I was NOT feeling warm and fuzzy or overly secure for my DIL's life at this stage of the game but tried to hold my tongue.  Remember how they had assured me this would take less than one hour?

Nearly three hours later, they were done.  They really do make a good team although they sound a little scary.  You'll be glad to know that there were no extra parts (other than that tiny little one that I pointed pout to them lying in the gravel to which they replied, "Oh, there it is!").  YIKES!!!, thought I.

If any of you need a brake job, I have two men I would recommend because the brakes worked just fine when they were done.  My son called us when he got back home...all in one piece!

Anonymous said…
It always takes men longer to do anything because they won't read the instructions.
July 2, 2013 at 4:55 PM

Nancy said…
My son-in-law fixed the brakes on his car. I was really worried when I heard him watching an instructional video on his iPhone in the middle of the brake job. Apparently they work though.
July 8, 2013 at 10:18 PM