Remember how I told you I would NOT make a good Buddhist?  Well, just to update you, I am still killing millipedes...every morning...although there seem to be much less as the days go by.  YUCK!

However, this is not about them nor is it about me.  It's about someone else who lives in this house...with me.  You do know I'm referring to the Pres, right?

The other night, we had just come in from sitting on the deck and it was time to settle in the LR and watch TV.  As usual, the Pres poured his tall glass of chocolate milk (a concoction that only he can make...a blend of store bought chocolate milk (YUCK!!) and regular milk). 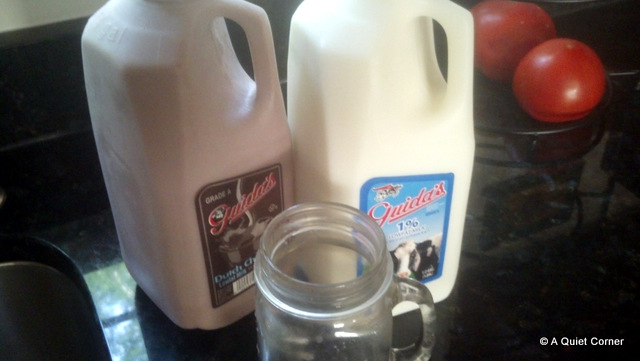 He then placed it on the end table near his well-worn leather chair and flopped, placing his feet on his footrest.  I took my usual spot on the couch tucking my bare feet under the sheet and pulling it up to my chin.  We were all ready to watch "Rock of Ages" with Tom Cruise and a host of other wonderful talented people...I thought.

All of a sudden the Pres, let out a not so nice word.  When I asked what was wrong he said, "That damn fly just dove into my chocolate milk."  YUCK!

He didn't.  YUCK!  He removed the fly...that dirty, who knows where it's been fly..and then drank the milk!  YUCK!!

Oh, one more thing.  If you haven't seen "Rock of Ages," check it out.  It has an awesome soundtrack with great performers in it...let alone the antics of Alec Baldwin!

valerietilsten59.blogspot.com said…
Must admit, I have taken a fly out of my wine once.
The Pres is still alive..):-
I am not sure if i have seen the film.. must take a peek on u tube.

Mimsie said…
I doubt I could make myself drink anything that had had a fly in it. YUK! I've had little sour flies drown themselves in my drink but they are so minute they don't worry me. We've not seen that film but as there is so little on Australian TV these days we are always looking for good movies to hire so may give it a try.
P.S. You have a truly wonderful blog.
August 13, 2013 at 4:56 AM

gld said…
I couldn't have drunk that milk and would even have changed glasses!