Although these pix were taken the mid August, I had to show them to you! For a solid week, right before I left for Florida, we had wonderful cool, crisp, sunny days with a breeze that made me want to fly...let alone the eagles. All I had to do was sit and watch their aerial performance. 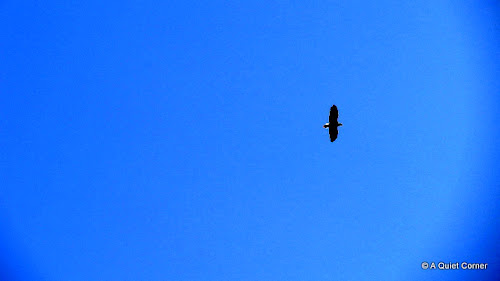 It began when I spotted an adult, easily identifiable, soaring above the yard and since I had "zoomer" outside with me, it was a match made in heaven! 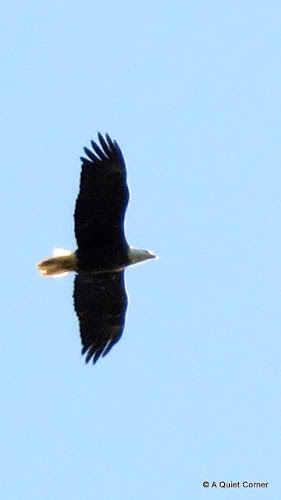 Then, without warning, the unannounced show began as one of the young eagles appeared out of nowhere soaring over the tall trees. Joining it's parent high above, their escapades could not be ignored. 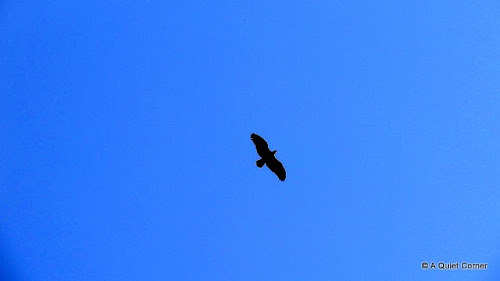 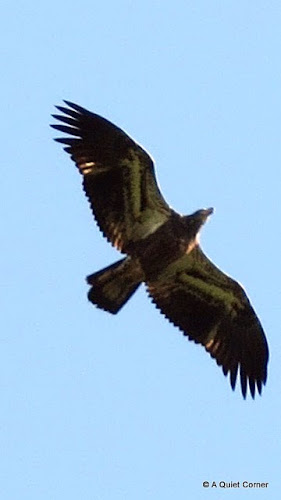 With the appearance of the second young eagle, the real show and maybe even a few games began...soaring, dodging each other, circling, disappearing, reappearing. Swirling and diving at each other, an occasional chirp could be heard. Then summoning them (I assume), the adult circling way above them, headed in the direction of the river. They obeyed immediately and followed like good not so little children as the three raptors sailed out of sight.

It was that day that I snapped three pictures with both immatures in the same frame!    Knowing that there's a chance they'd be gone when I return made me sad, but the Pres told me he would listen for them daily. Since I won't be returning until sometime in September, I am hoping the adults will at least still be here.  According to Kate at Division of Wildlife, once the immatures go out on their own, the adults should use that time to make repairs to their nest.

One more thing. These posts are being done via BLOGSY and since I'm unfamiliar with all of the editing features, they may not look as tidy as Blogger....sorry...:).

Anonymous said…
You've had quite the treat this year watching the family 'find its wings'.
September 3, 2013 at 6:59 PM

Beatrice P. Boyd said…
Great to see these eagles soaring, adults and young ones, JP. Bet you were wishing for a mega-zoom camera.
September 3, 2013 at 7:58 PM

Grenville T Boyd said…
Hey JP!!!!! Great bird pics. And I see you've mastered Blogsy very well. I have to do a refresher before the Niagara trip. Say hi to the Pres for me.

Mimsie said…
What beautiful birds they are and how fortunate for you to have them put on such a great show.
September 3, 2013 at 10:52 PM