I've always wondered what it would be like to have my own pilot. Just think of the possibilities...go where you want when you want...no traffic...no crazy drivers to contend with. For instance...

I had a long list of things to do and get done before I hit the road besides hitting the gym.  To make things worse, I left much later than normal. The Pres and I have a lot going on right now so I decided to actually eat breakfast with him.  You all know he doesn't get up until close to nine, so it throws my early start off completely.

Planning on hitting the gas station first, I headed towards town only to find myself behind a pick-up going awfully slow. It wasn't him though. It was the car in front of him. The speed limit is 35 mph where we were and this woman was doing 20!!! I immediately thought she must be from out of town and I was right. A few traffic lights later and the pick-up and I are still behind her when suddenly we come to a STOP in the middle of the street, no less. Then as the driver of the pick-up tooted his horn, she pulled completely into the oncoming lane and proceeded to back up across our lane in order for her to turn around!!!  No insult to anyone out there...the car had Texas plates and all I kept thinking about was that she must be used to the wide open spaces and not traffic...LOL! 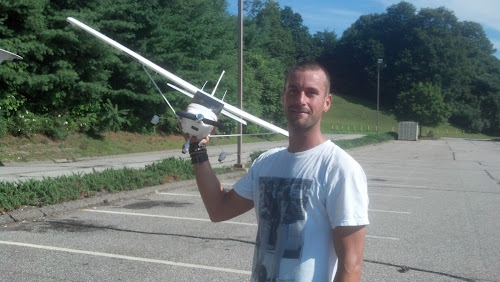 Oh, back to my pilot. When I did finally get to the gym I found him.
Isn't he a doll? Now back off girls...he's the most wonderful father of four and is very happily married man besides being one of the sweetest guys.

One more thing. Although I thought I scheduled this to post while I was in Florida, it didn't process for whatever reason, which is why you are seeing it this week. I just had to show off my own "personal pilot"...:)

Sharing another piece of life with you and

Anonymous said…
What a fab looking pilot you have there! HE should have just flown you over or around that slow traffic.

Ann said…
what a cute pilot you have.
I got a good chuckle out of the driver turning around in the middle of the road. I can laugh since I'm not from Texas....lol
September 5, 2013 at 5:07 PM

Mimsie said…
We are both late risers and also late to bed.
That woman driver sounds like an accident looking for somewhere to happen. Let's hope she made it home safely without killing herself or anyone else.
Cute guy but guess at 81 I'm a bit old to judge. : )
September 5, 2013 at 11:49 PM