I wanted to walk in the woods and gather nuts.  Gather acorns.  Gather stuff.  Stuff that I could then place in a glass cylinder to place on the table.  You know...Fall stuff. 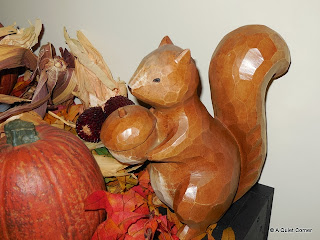 Oh, I walked alright.  In the woods too.  But all I got was TICKS!

I'm not sure about your neck of the woods, but I have been taking crawling teeny tiny eight legged disease carrying ticks off of Moon and Copper nearly daily.  Yes, they wear tick protection which makes the nasty critters die and fall off, but I get them while they're alive and crush them.  I always call them over to do a "tick check."  In fact, now it's become a game.

My son gave me a section of old vine that was gnarled and curled.  It resembled a coiling snake.  I saw potential.  The plan was to take my Dremel tool (did I ever tell you how much I LOVE that thing?) and actually make a snake head on the upper end...the coiled end, then set it on the ground somewhere in the yard...well, just because.

Hmmmm.  I guess the two canines that live here decided they needed it too.  When the Pres and I were gone all day this past Sunday and got home, my would be snake was not on the table where I'd left it.

Destroyed...chewed...eaten, there it sat.  No.  There it lay...because there was no coil.  All that remained was a candy cane shaped piece. 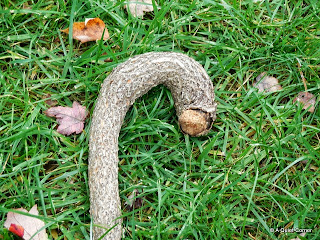 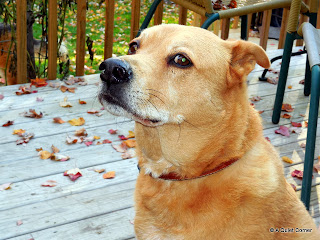 Was it him?  The rambunctious bundle of energy?  The boy who is a compulsive chewer?  The lab/pit reject we saved eleven years ago?
Was it Copper? 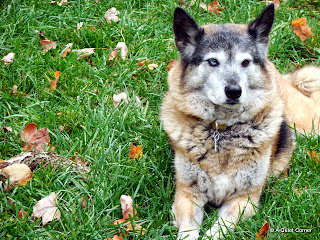 Or was it her?  (Note the remnants of the stick in the grass?) The watch dog?  The starving shepherd/husky reject we saved?  The dog who licks me to death?  The dog who still has her stuffed toy, Fluffy?
Was it Moon?

Sharing my monsters with you and

Mimsie said…
Well laid plans don't always come to fruition when you have 'others' there who also have plans. A most enjoyable post and thank you for sharing this story.
October 27, 2013 at 6:12 AM

MadSnapper said…
they are both so beautiful, and here a stick is like gold to both of ours, so it would be either/or or both that chewed that stick.. don't you just love that guilty look they can give us? Baby does what we call 'making her statement". she will drag a run in the middle of the living room, or move the door stop to the living room, or pull a book out on the floor... she doesn't chew anything, she just makes her statement. she only does that when she is mad with us, as in when we are all out and she will not shut up barking and we put her in the house.. or if we shut the bedroom door with her on the outside
October 27, 2013 at 6:54 AM

Anonymous said…
Couple of monsters in this house too, and Izzy is our chewer. Cannot tell you the things she has destroyed, but then if I could get my husband trained to put HIS things away, perhaps she wouldn't destroy them? Hmmm. Hard to train a husband.

simply bev said…
Perhaps they thought your "would-be" snake was a gift! My dog probably would have assumed I'd brought him a delicious stick like that!
October 27, 2013 at 10:25 AM

Ann said…
I know when I had two dogs it was always tough to figure out which one "did it" they would both get the guilty look. I suppose it's the canine version of sticking up for each other....lol
October 27, 2013 at 12:32 PM

MTWaggin said…
The world may never know, they thought candy cane was much more appropriate than snake! :)