For my leaf peeping adventure, while the Pres was busy /replacing building stairs for a friend of ours, I headed West. My destination? The Pachaug State Forest in Voluntown, consisting of 24,000 + acres encompassing five towns, is the largest in Connecticut and includes the Pachaug River, which runs right through the middle. I couldn't wait!

My plan?  I was going to do some peeping.

However, since I was heading toward Rhode Island, I sent my daughter and Angel a text, asking them if they wanted t hook up for breakfast. Enjoying breakfast with them at a local diner was definitely the way to start the day since a tomato, bacon and cheese omelette was my choice....YUM!!! 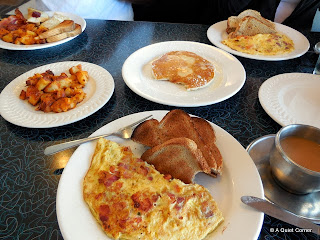 When done, they were heading for a walk on the beach but I had a picture of that huge forest in my mind that just wouldn't quit,  so we parted ways.

Deciding to park my car on the end of the designated area within an arms reach from the trail was smart too (you'll read why soon).  Changing into a light jacket that had lots of pockets to hold my cell and my small camera helped too because the wind had begun to pick up.  Gathering my cameras and tucking my car key in my jeans pocket, I was off. Since it was a week day there would be minimal people. 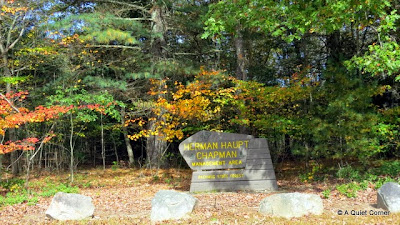 Surrounded by tall pines I began snapping a few pix here and there, listening to the hawks in the distance made me head in their direction.  Then my quest and serenity were disrupted. 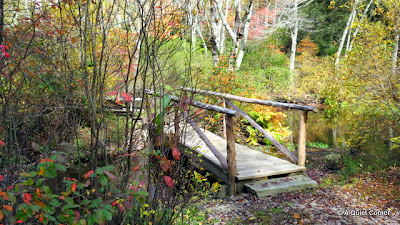 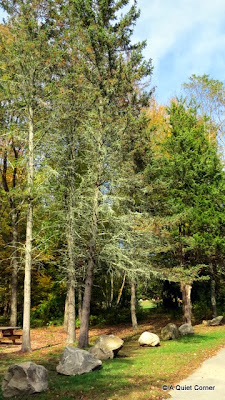 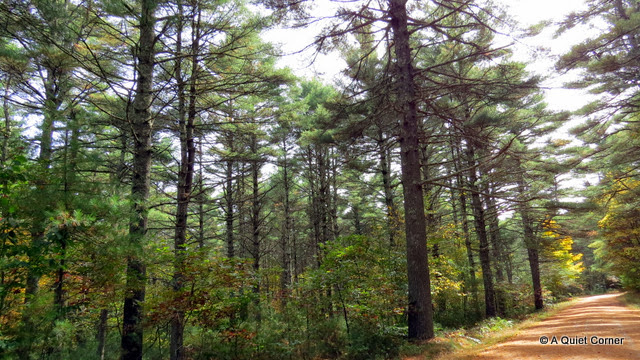 A shiny black SUV with dark tinted windows headed in my direction. I immediately dropped my eyes to the license plate, wondering if it was a state vehicle. It wasn't.

As it drove past me slowly, I tried to look right at the driver but the tint was too dark to see anyone. Creepy, I thought.  I kept walking.

Continuing on, I couldn't help but notice the SUV that had gone down the road, turned around and was headed back in my direction. Still driving slowly, it passed me a second time. Weird, I thought. I kept walking. 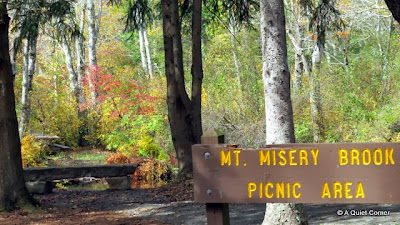 Taking the next small road heading to a picnic area which I saw was a dead end, I thought for sure it was over...that the SUV was gone.

I was wrong. That darn SUV drove by me again.  It was really beginning to creep me out, I headed back toward my car, walking slowly and appearing to be taking photos.

Hitting the unlock button just as I was within two feet of the driver's door, I got in and hit the lever locking my door. By the time the SUV turned around and headed back, I was pulling out on to the gravel road heading toward the main entrance. These 24,000 acres will still be there WHEN I BRING THE PRES WITH ME and I can PEEP all I want!

Beatrice P. Boyd said…
Too bad that your fun outing day had to be cut short, JP. Still it was nice that you enjoyed breakfast with family.
October 19, 2013 at 6:45 AM

Florida Farm Girl said…
Oh, I do hope you reported that strange behavior to the authorities. I'm so sorry that your outing got interrupted in such a way. I so love the fall colors in New England.
October 19, 2013 at 7:16 PM

Judith @ Lavender Cottage said…
Thank you for stopping by to see my garden. The state forest does look like a nice place for hiking and photography. As for the black SUV, that is creepy and I'm glad you're here to tell about it!
October 19, 2013 at 8:58 PM

~Kim at Golden Pines~ said…
Breakfast is one of my favorite meals, and your post is why.