Once I discovered the remains of my would be snake, I watched the two dogs carefully.  Moon picked up the remaining chunk and darted to and fro.  She wanted me to chase her for it.  So I played along for a bit and when she rolled over to have me rug her belly! Copper snuck into the picture and made off with the remains.

He dropped it in front of his dog condo not far from his feeding station.  Meanwhile, I decided that I would shake out their beds which means I literally get on my hands and knees and reach into their condos to pull out the bed.  Guess what I found in Copper's bed?  Yep.  A decent size piece of my would be snake!

This is what I think happened.  I envision Moon reaching up and removing the coiled piece of wood from the table.  She chewed on it for a bit, got bored and once done, just walked away.

Then Copper, who ALWAYS has to be first...first to be kissed, first to be rubbed, first to have his halter put on...decided that the treasure belonged to him and would be safer in his house! 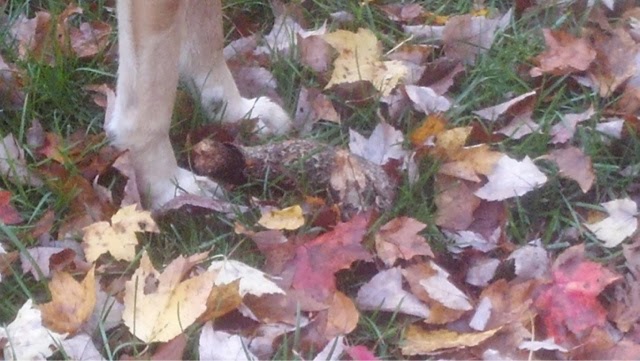 Sandra said…
and I am thinking you have guessed right. in our house first to be first is Jake, in every thing.. he gets a treat first to... both of them love to chew sticks to smithereens
October 28, 2013 at 8:12 AM

Anonymous said…
Neat story and photo ~ gotta love our dear fur persons they are such delights and loves ~ happy week to you ~ carol, xx
October 28, 2013 at 4:29 PM

Angela said…
And now we know the rest of the story! hehehe Gotta love how they work well together like that!
October 28, 2013 at 11:41 PM