With temps falling into the forties, I decided it was time.  That morning began easily enough.  Making my way through my cookie recipe box pulling out the favorites as I went along, the pile grew...and grew...and grew.

Knowing Christmas is only a few weeks away, I knew that I would have to make two varieties
three times a week initially, then taper off to one kind a day, three days a week.
Can you tell I love math and logic and variety?

Rolling up my sleeves and putting on my white cotton apron that I found for $1.99, I made eight dozen oatmeal raisin and close to seven dozen of my SIL's recipe she serves at their bed and breakfast,  The Mission Inn. 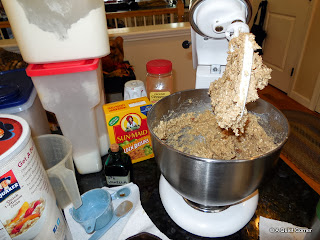 Made with craisins, coconut, raisins, chopped nuts and lots of cinnamon, they are delicious!  (As of today seven varieties down and) just a few more to go.... 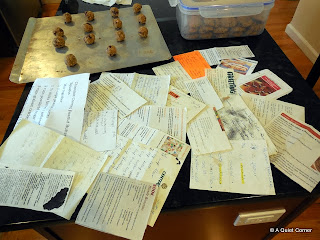 Here's what's left after I put some of the recipes back!  Yikes, seeing them in a pile and spread out like this, I guess I'd better get moving.
Don't you just love a challenge?

Anonymous said…
So nice you still enjoy the muss and fuss of Christmas baking. I'm afraid if I baked cookies bars squares and loaves I'd end up forty pounds heavier by Christmas...no willpower you see.
November 16, 2013 at 6:45 AM

Anonymous said…
Are you going to share your SIL's recipe?? Pretty Please! You've really got your work cut out for you!
November 16, 2013 at 8:58 AM

Wsprsweetly Of Cottages said…
You are wonderful! I don't think I will ever bake like that again. I've gotten lazy I suppose, but I love it when others get into their holiday baking. I am just not motivated. I let my daughters do the baking anymore.
As Sandra says...it's no game to me either. It's hard work. Bless you for doing it! :)
November 16, 2013 at 8:40 PM

~Kim at Golden Pines~ said…
I do love a good challenge, and a good cookie too--Or is that TWO! :-)

Tiggeriffic said…
Yum Yum~! my favorite~! Oatmeal Raisen.. Good Luck on the cookie baking... My problem is I love to eat the dough and I wouldn't have very many cookies to bake...
It's almost 9 p.m. here in Iowa and it's 60 degrees and a full moon outside... It started out really cold this morning.. now we are having a warm breeze and temp's outside... WOW what a change..
Have a tiggeriffic day..ta ta for now:) from Iowa:)
November 16, 2013 at 9:52 PM

Mimsie said…
My days of baking are long gone but I always love to hear about or see what others are doing. Enjoy.
November 17, 2013 at 4:37 AM

Ann said…
hard to believe it's cookie marathon time again already.
I could go for an oatmeal raisin cookie right about now
November 17, 2013 at 10:40 AM

Beatrice P. Boyd said…
In years past, I also baked cookies although not in the quantities you have described. The problem was that it was too tempting to sneak a couple. Now, we just bake some on an as needed basis.
November 19, 2013 at 7:19 AM