"Honey, you made the book," said the Pres looking up and over the magazine he was holding in front of him.


Nonchalantly I answered, "What book?" 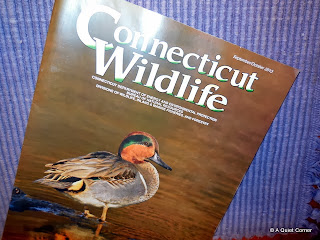 Handing me the magazine, which was opened already to the page 10, I began to read the article written by Kate Moran, DEEP Wildlife Division.


"During spring and summer of 2013, the DEEP Wildlife Division, assisted by many dedicated volunteers, monitored the nesting activities of bald eagles...throughout the state.  Thirty five pairs of the state threatened bald eagle were documented this year.  Four nests failed while the remaining 25 pairs successfully produced 41 chicks....This year, bald eagles nested and raised young in every Connecticut county but one."

So as not to bore you, I took a snapshot of the chart at the end of the article that recaps the statistics. 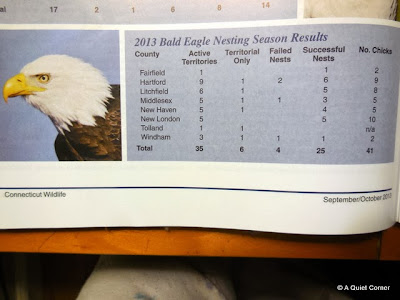 As you can see by the stats, Windham County had three active bald eagle territories.  Ours was the one listed in the SUCCESSFUL column, with the number of chicks being two!!!!!


Oh, one more thing.  The last time I saw one of the immature eagles was Wednesday, Nov 8th soaring over the woods facing West.  Maybe it had just come from the river. 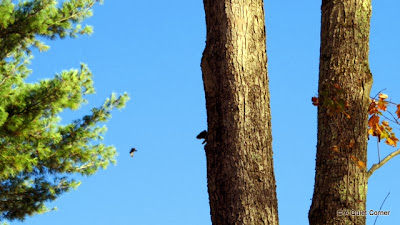 Oh, one more thing.  Imagine my name is where the words
many dedicated volunteers
appears...:)

Mimsie said…
Congratulations....even if your name doesn't appear you (and we) know who you are.
I've often wonder why they are called 'bald' eagles when they in fact have a full head of feathers. Must be a reason.
November 14, 2013 at 6:19 AM

Judith @ Lavender Cottage said…
You deserve to take pleasure in seeing your contribution in print. Also, to be commended for helping with a worthwhile cause.
November 14, 2013 at 10:48 AM

Tiggeriffic said…
I read between the lines and saw your name.. Congratulations~! Eagles are so cool and huge when flying overhead..
I have missed a couple days of reading your blog.. OHHHH I just loved the story about the toilet paper..Mia is so sweet and you can tell she loves her Grandma...IT just made me smile and I wrote it in my journal this morning. Grandchildren are a blessing and a gift from God.. So special and they sure do make you feel good and happy when they are around..
Have a tiggeriffi day~! ta ta for now from Iowa:)
November 14, 2013 at 3:41 PM