The kitchen was not neat. Baking utensils and ingredients covered the island. I was on my third variety that morning when...

Heading to the door wearing my apron spattered with cookie batter, a little flour and confectioner's sugar, I was glad that the Pres would get there first.   He opened the door and peaking around the Pres, there stood a young man (Ryan), his wife, Sharon, and their little boy, Andrew. They walked in, handing me the box as he extended his hand he introduced himself and family to us. 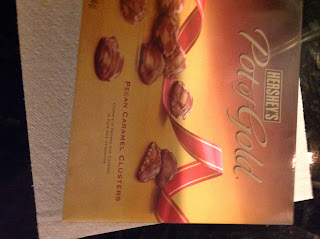 They will be our new neighbors! Ryan is about our son's age and his wife a few years younger. Their son, Andrew is just the cutest little guy you could meet. They are closing this month and should be moving in before Christmas...:) so I've already added them to the cookie list.

Since the kitchen was filled with baking ingredients and cooling racks filled with Italian drop cookies, they could tell I was a baker. Then Sharon and I began talking about gardening and that is something we also have in common! Telling her I would be more than glad to share what I had, she smiled sweetly. But, this was the clincher.  I knew they would make good neighbors when I told her that a friend's husband also worked at Stop &  Shop.  She agreed that he is just a big huggy bear!

Meanwhile, the last of three lots has also been sold and OS (other son) plans on digging the foundation next week.  Those folks, who we already met when I had them tour our house a few weeks ago, are from Virginia...Lynchburg. When we met them a few weeks ago, she was so tickled when I knew where Radford was that I knew once they moved in, we would hit it off as well.

MorningAJ said…
It's great when you get good neighbours. The houses each side of us are rentals so we tend to get new people every year or so. The current ones are very little trouble - though we rarely see one side at all. We've had some types over the years though!
December 9, 2013 at 7:04 AM

Florida Farm Girl said…
Good neighbors always make life a whole lot easier, don't they? I'm so glad you look to be having some good ones.

Inger said…
Good neighbors, how great is that. We are getting to know our new neighbors too, the owners of the cows, and like them.
December 9, 2013 at 12:58 PM