We are battling what seems to be a losing battle here in A Quiet Corner.  The odds are not in our favor.  There's only two of us...and tons of them.

Thus far we have placed a glass filled with Apple cider vinegar diluted slightly with water and official traps purchased at the local feed and grain store on the kitchen and great room windowsills. 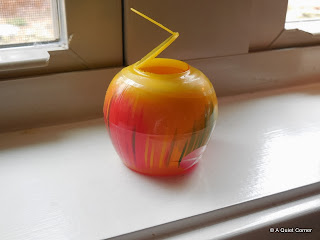 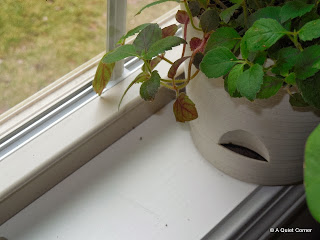 Granted we have eighteen house plants but they have been with us since we moved back to CT.  However, we cannot determine where they came from which now seems irrelevant.

Was it the new potting soil we bought to transplant into larger pots this Fall?

Was it the weekly purchase of fresh fruits like bananas and or pineapples?

So many have died as they seem to hover closely to the windows.  Did they starve?  And if they did, who cares?????? 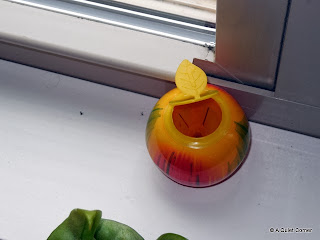 Oh, and another thing.  When I went to the feed and grain store! I bought a systemic that you work into the soil for the plants which should annihilate a few too!

Writing this post on my iPad, I just killed one, clapping my hands together in mid air.  Apparently attracted by the lit screen, it was flying back and forth. So there it sits...motionless, on the screen.  The other night, the Pres clapped his hands together apparently misjudging the distance and broke his glasses!!  I know it's not funny...but it really was...LOL!

Annoying...that's what they are...this invasion of tiny winged black pests...FRUIT FLIES!!!?  Oops...there goes another one...

Anonymous said…
Good luck with the invasion. I just hate it when nature invades my nest.
December 13, 2013 at 6:24 AM

Sandra said…
we don't have an invasion, but i can say we have had several in the bathroom and in the kitchen in the last week, i think they came from the bananas... but not sure
December 13, 2013 at 8:33 AM

TexWisGirl said…
we had a few this fall, too. but they died out quickly. i think because the house gets so cold when we get low temps.
December 13, 2013 at 10:36 AM

Monkeywrangler said…
We got a FF invasion from over ripe bananas. Cider vinegar in a vase with a small hole in the saran wrap covering it trapped them in there. It seemed to work well enough.