After getting the same error message every time I imported pictures from my cameras to the laptop, I emailed John, the man who cleaned and organized the device several months ago.  He thought that one of two drives could be corrupt.  Keeping that in mind, I then talked to my friend's son (a computer geek) and rattled off the message.  After testing out the USB ports like he told me to, Mike suggested that I purchase an SD Card Reader as an alternative to repairing/replacing my laptop. 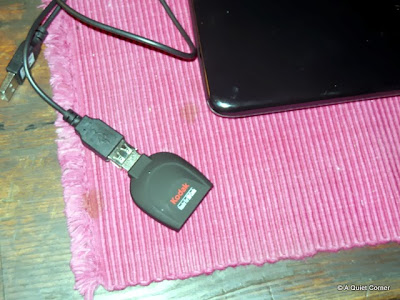 Plugging it in to one of the three USB ports, I discovered that those all work fine.  It sure was an inexpensive fix for my old laptop!!

Meanwhile, I while in Staples, I cam across a great accessory for my iPad too.  Packaged together the two adapters...one for SD cards, one for USBs...making it so easy to transfer/import pix from outside sources.   Way to go, Apple!!!!
Email Post
Labels: Blogging Connecticut

gld said…
Glad you found an easy fix. I have a card reader too and have no idea why. I also found another thing to plug into a USB port. I don't even know what it is. Maybe things I got when I had the old computer......

Florida Farm Girl said…
Glad you were able to find an easy and inexpensive fix for your computer problem.
December 7, 2013 at 2:40 PM

~Kim at Golden Pines~ said…
I'll have to remember this--My computer is on borrowed time, and anything that may help is always good to know about! Hope you're doing well, and are staying warm--Take care, JP!
December 7, 2013 at 5:04 PM

Ann said…
always good when you can find a quick and inexpensive fix for the electronic gadgets.
December 8, 2013 at 6:22 AM