"Shrink" is a term used in retail meaning stolen/missing merchandise. Since my daughter has worked in retail, she has told me stories about numerous thieves and their attempts to steal merchandise. For years, I heard her voice her disdain and disgust towards these people let alone those she pursued on foot across parking lots until the security guards took over. So last week, when we went shopping... 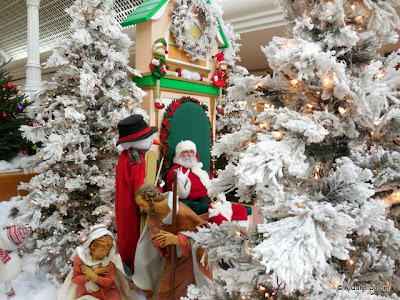 With Christmas being just a few days away, people were scurrying around, bumping into each other, pushing their carts into passers by and shoplifting....YES, I said shoplifting.

While standing in the checkout line at Victoria's Secret this week, I saw a woman pick up one of the items on display at the checkout counter. It was in a basket marked 3 for $25 or $10 each. She reached into the basket, picked up one of the small boxed perfumes, turned her body so the clerk behind the counter couldn't see and just dropped it in her opened purse!

Immediately. I told my daughter what I saw and since we were then called to be taken care of, we told the manager, describing the woman...a woman in her late forties/early fifties with long dark hair, wearing brown leather boots and black peacoat and sporting a Kate Spade handbag no less!!

I still cannot believe she STOLE something!

MadSnapper said…
I love your photo today and i believe every word of this. my Doctor quit putting up a tree because every year by the end of the season there was not one ornament left on the tree. 3 years ago her mother died and she put all the old ornaments on her office tree and they were all stolen. i found this out because she had a gorgeous tree in the lobby but no ornaments. all the decorations were wired into the tree, like berries and ice and snow.... i can't believe people will decorate their Christmas tree with stolen ornaments
December 24, 2013 at 6:37 AM

Mimsie said…
It does sadden one to hear of shoplifters and those that steal seemingly just because they can. One must bear in mind though (and I am not condoning theft of any kind) that some women going through menopause have been known to shoplift without realising they are doing so. The lady you saw though sounded as though she was experienced and hopefully was caught by security.
December 24, 2013 at 7:00 AM

Anonymous said…
I only hope that this item was one that she or someone else 'truly needed'. I hope it makes her Christmas a little merrier knowing that the gift she is giving was stolen merchandise.
December 24, 2013 at 9:54 AM

Beatrice P. Boyd said…
A sad story indeed, JP, and while it would be charitable to think that the woman stole out of need, it seems more likely she did it because she thought she could get something for nothing and without paying. Glad you reported the incident. I chose today to post about better things at Christmas, but there is also the ugly sides to show as you did. Thanks for all your well wishes. Hope your sister is doing better and will also celebrate a Merry Christmas. Pat and I wish you and Joe a wonderful holiday season and hope to see you in 2014 !
December 24, 2013 at 10:22 AM

Unknown said…
Oh my. This is really bad. I know some budgets are tight but steeling from others is not okay. Save up al. year if you have it. This is a really sad story. It takes away from the holiday spirit of giving.
December 24, 2013 at 11:27 AM

Betty said…
I think for some people it's a game. They have the money but get some kind of a rush getting away with it. I went to the bank on Saturday because we were going out to eat and I prefer to pay cash. I've had my charge card used by others a couple of times and I believe it happens when we go out to eat. That's the only time my charge card is out of my sight. The waiter takes it and then brings it back. When I tried to get $200 out of the bank it was denied. When I got home I found an E-mail from the bank saying that because of the Target thing I could only take out $100 a day until my new card arrives. People are stealing all over the place and getting more and more creative. I guess all the new technology in some ways makes it easier. We all end up paying with higher prices, fees, etc. It makes me mad and I'm glad you told the manager.
December 24, 2013 at 12:36 PM

MorningAJ said…
Of course, everyone could dress well if they stole everything! Probably explains my scruffy wardrobe, all paid for, and usually from the sales!

Jeanne said…
It is pretty amazing isn't it. I wonder if they pursued her in any way. I cannot imagine having the audacity to do something like that... let alone living with yourself. hope that you have a wonderful Christmas.
December 24, 2013 at 1:47 PM

Ann said…
it's not wonder stores charge so much for items, they have to cover the cost of those who think they don't have to pay for things. The worst part is that woman probably had enough money in her purse to pay for that.
Working in a grocery store I see it too. People will eat salad from the deli and leave the empty container hidden behind other merchandise on the shelf
December 24, 2013 at 5:36 PM