It was a surprise that we'd been planning ever since he told us he was going to be a Grandpa. That was back in May.

However, in July, baby Meadow was born four months premature and we all prayed for her survival since she weighed just a tad over one pound!

Sure there were tubes.  There was neo-natal care.  There was oxygen and incubators.  But through it all, there was life!

Last week we threw the shower and Joe, my Tai Chi instructor, who was totally overwhelmed. It was wonderful!!! 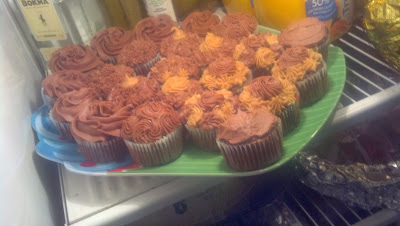 Jeannine had begun knitting in the summer. Her words, whispered quietly, to me last month were, "It's almost done. One more sleeve."   When I saw it, I couldn't believe she made it... 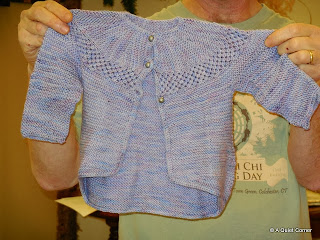 It is the most delicious combination of purples you could possibly imagine!  And the buttons...the buttons she selected are exquisite.

Meadow, we hope, will be wearing it on Easter!
She now, at the age of four and a half months, weighs a little over seven pounds!