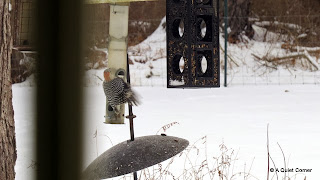 Bullying.
It's everywhere nowadays.
And it annoys irks me.
I loathe it.

Once upon at time, an young red-bellied woodpecker, came to the feeders.  Born in the Fall of last year and now on his own, he no longer follows his parents. 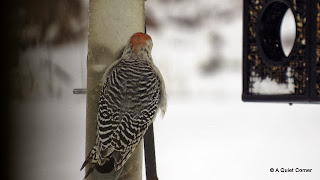 Rather than pecking away at the suet provided by the old man and old woman, he chose to pick away at the feeders, eating the seed.  This independent youngster, with pathologically high self-esteem, felt like he needed to control, dictating his authority over the others. 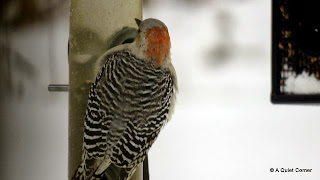 Much larger than the other birds, he soon learned that because of his size, he could pretty much do what he wanted and go where he wanted.

Full of himself and lacking a genuine regard for others, he continued to push his way around the feeders. 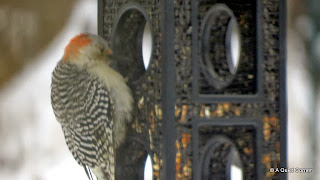 Trying every feeder and shaking his head vigorously to scare the little ones away, it was right then and there that the old woman named him "the red bellied bully."


It comes in all shapes and sizes.
It can be mental or physical.
Bullying is not good.

Take a stand.
If you see or hear of someone being bullied, don't just stand there taking pictures.  Do something.
Please.

Sandra said…
blue jays are big bullies around here, so are the crows. but they are not true bullies they are what god made them to do.
it is there natural genetics... people are another story... i have a neighbor that her husband recently died. she is lost without him because he bullied her from the time she was 17 until she was 80.. she doesn't know how to live without being bullied. her dad was a bully to... that is what irks me... the people who bully and also the people who don't fight back.
January 21, 2014 at 8:43 AM

Tessa~ Here there be musing said…
Excellent way, to get a point across. Excellent.

Rambling Woods said…
Yes.. red-bellied woodpeckers are very bossy until you come to starlings who will take them on. But I love them and love watching them bring the babies. This one is a female. The males have a completely red head and the females have a gray patch on their heads so you can tell them apart.

The heated birdbaths will only come on and use electricity if the temperature falls below 40. Most can be used year round and I just tuck the cord under with some tape when it gets warmer. But is a life saver. Thank you for caring for the birds... Michelle
January 21, 2014 at 4:43 PM

Anonymous said…
I've been keeping up with a story of cyber bullying in one of the middle schools of my hometown, so when I started to read this...I almost stopped. But I read it and had a good laugh. Thank you!
January 24, 2014 at 12:56 PM