~~~
Wednesday afternoon, the Pres drove me to my best friend's to babysit Bunny, their German Short Haired Pointer.  "Bun Bun" also known as "the Baby" not only has bladder cancer but also hates being alone for long periods of time.   My friend was taking her hubby, who is like a brother to me, to the hospital for surgery scheduled early Thursday.

Bringing my "outside dog attire" and looking forward to spending some one on one time with Bun Bun, I was still in my jammies when they left.  My friend made me homemade biscotti and an assortment of nibblies for me to enjoy while I was "Baby-sitting."  Meanwhile the Pres was home plowing and re-plowing since the snow was coming down 2-3 inches an hour!!  The plan was he would pick me up after she returned home from the hospital.


Yep...they were up early and left early to drive in the nasty weather making their trip Thursday morning treacherous.  Arriving at the hospital safely and once he was prep'd, now all she had to do was wait...the hard part!  When it was all over and was told the surgery went well and he did great, she waited until he "came to."  Once awake, he, being the considerate husband that he always is, insisted that she head home immediately.  So, cleaning off her Jeep and putting it in 4 wheel drive, she hit the road.

When she got home, I was out back clearing a path off their deck so the Baby could make it to her ramp that the Pres built and then to a small clearing to relieve herself when needed.  I was glad...so glad...to see she made it home safely!  Yet I could also see that she was exhausted and needed to rest.  We've been friends forever and knowing she needed to unwind, I called the Pres who he said he was on his way.  He knew that if she made it home, he would make it to pick me up.  Besides, he and I haven't gone on an adventure like that in a long time!! 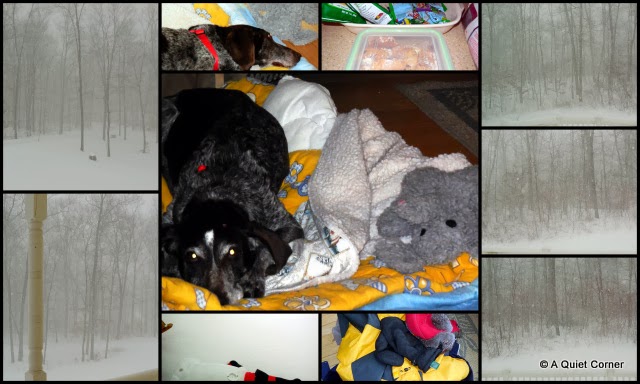 Driving in nearly white conditions, his diesel plowed through the snow and slush as if it was powdered sugar spilled on a kitchen counter.  It was fun...:)!

Have you had any adventures in the recent crazy weather?
~~

Friendship Friday From A to Z

eileeninmd said…
I have to admit, I do not like driving in the snow. I am glad the surgery went well and your dog sitting sounds like fun. I love dogs. Enjoy the snow and week ahead!
February 17, 2014 at 6:42 AM

Beatrice P. Boyd said…
Bad enough to face surgery, but even more so in bad weather. Glad you all made it to your destinations safely and that the surgery went well for your friend's husband, JP. And, you did a very good deed with dog sitting Bun Bun as did Joe for the delivery and pickup service.
February 17, 2014 at 7:21 AM

Sandra said…
no weather related adventures here.. glad yours worked out safe and sound and that you could stay with Bunny. when bob was in the hospital, i had to come home every couple of hours, but we are only 2 miles away to check on the dogs. it is great you could sit with bunny
February 17, 2014 at 9:00 AM

Nancy C said…
We had a bit of freezing rain and light snow this a.m. to making things interesting... what a great friend you are to babysit. xo
February 17, 2014 at 9:08 AM

Candy C. said…
What a sweet post! You are a wonderful friend and it sounds like she is too! I'm glad her hubby is okay and that everyone made it through the snowplow driving all right. I hate to admit it but we have been using the A/C in the car recently...
February 17, 2014 at 9:12 AM

Anonymous said…
Glad everything went well for them and that you arrived home safely. Adventures in winter driving???? Not in a long long time.
February 17, 2014 at 9:29 AM

Judith @ Lavender Cottage said…
When I still worked, I drove during some nasty conditions of snow and ice. Now, if I don't have to go out, I don't because there are way too many people who don't know enough to slow down.
I suppose you might call it the same as we do JP - 'white knuckle driving'. :-)
Judith
February 17, 2014 at 10:09 AM

TexWisGirl said…
so glad you were able to help your friend out and that you all managed to stay safe.
February 17, 2014 at 10:19 AM

Donna Heber said…
Wonderful mosaic! It has been a crazy winter here. We received 2 feet of snow on Friday and a little more is on the way. It is beautiful though.
February 17, 2014 at 11:29 AM

Tessa~ Here there be musing said…
Oh how good you were, to take this worry off her mind... And so glad he is doing well. And that she got home ok.

Ann said…
I've had enough winter weather adventures in the past that I try to avoid them at all costs
February 17, 2014 at 6:22 PM

Anonymous said…
What a great friends you guys are. You for offering to come out in that weather to dog sit and her for making you those yummy treats!