Once upon a time there was a dog who had a house all to herself.  However, during the blustery cold Winter, she decided that she wanted to stay in "the people house" with her brother Copper.

When the sun became a little higher in the sky as Spring approached and the snows began to melt, it was time for her to go outside and investigate all the new growth that Spring brings. 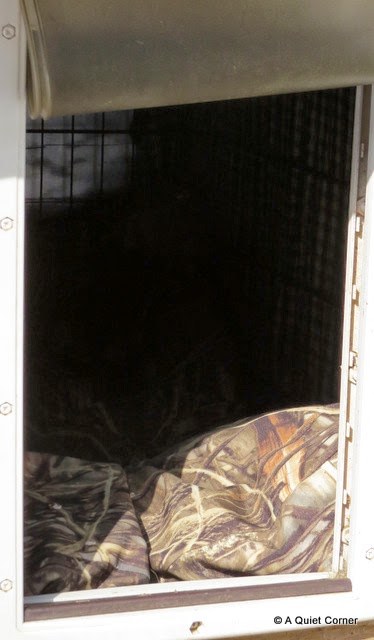 Everything in my house looks okay from a distance, thought the soft, silky Shepherd Husky as she approached her doorway.

Daydreaming of lying on her Cabela's Real Tree insulated dog bed and rolling on her back with her legs straight up in the air, the open dog door will give me a great Spring breeze, she thought...moving in a little closer. 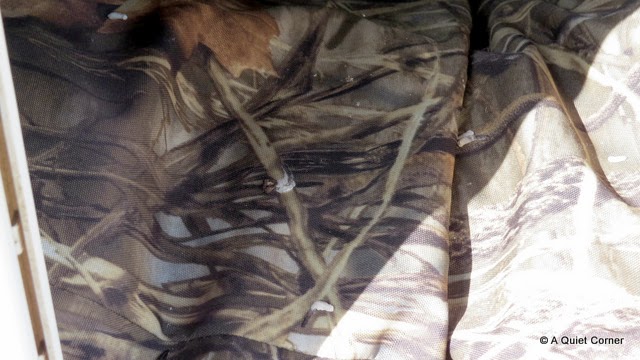 Hey, who's been sleeping in my house? , she said peering inside.

Do YOU know who has been sleeping in my house?

WHO left bird poop all over the "Real Tree" branches?

Mom thinks it's one of those fat little white breasted birds.  We watched it going in and out, in and out, over and over.

You know which ones I  mean?...the ones who make all the noise and stash seeds from the feeder in the bark of the trees.  You know...the ones who build their nest cup using fur, fine grasses, feathers and other soft material along with shredded bark.  In fact, Mom found some of MY fur!!  Can you imagine? 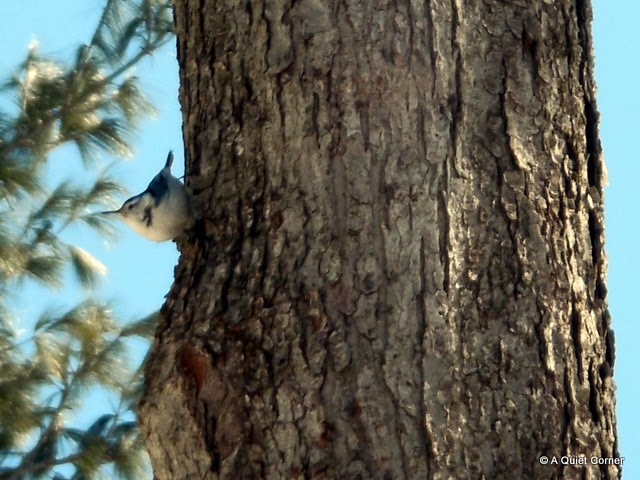 Mom moved the beginnings of the nest out of MY DOGHOUSE...:) but that fat little white breasted bird was mad, chittering away at Mom.  And then Mom said,
"No bird needs a house that big, Moon!  She'll build a new one.  Good thing we found it now!!"

Do YOU think we should let that crazy bird use my doghouse?

Sharing Moon's dilemma with you and those at

Lisa @ Two Bears Farm said…
I can see Crazy Bird and Moon so happy together. Moon takes a nap in the house, and Crazy Bird picks debris and any fleas out of her fur.
March 26, 2014 at 7:19 AM

Sandra said…
enjoyed the tall tale very much and you did the right thing, no birds allowed in the dog house... just think what would happen if eggs showed up in that nest and then babies.
March 26, 2014 at 8:24 AM

Florida Farm Girl said…
Maybe it was gonna be a commune and she was just starting the construction project. :)
March 26, 2014 at 4:42 PM

Andrea @ From The Sol said…
Just as we say to our children ... someday you will understand, Crazy Bird. At least you will understand why you can't have a nest on the bed of a big dog named Moon. But, I'm not sure you will ever quite get why Moon's Mom is calling you "Crazy Bird". You are, after all, only doing what comes naturally and that does not make you crazy .... hmmmm. Who is the crazy one here ... a bird who does what come naturally or a Mom who writes wild tales about it. I think I will have to stew over that for now as I LOL. Great post ...

Stewart M said…
Crazy Nuthatches - what have they been doing!

Jen said…
Yes, good thing you found it before there were eggs. She will rebuild somewhere more appropriate, I hope. You could give the bird her own house, if you happen to stumble across one...
March 28, 2014 at 9:25 PM