Looking deep into the woods,"Here they come again," said the Pres. 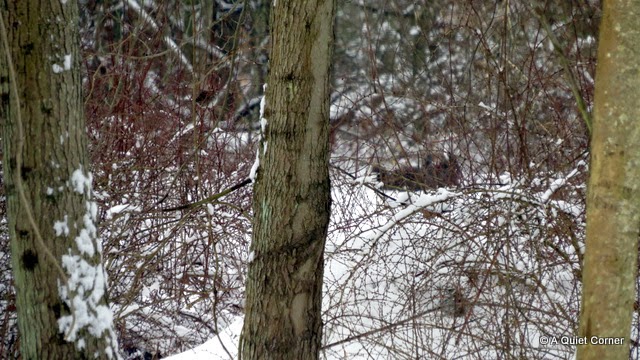 The corn had just been put out in the clearing that the Pres plows for the deer. 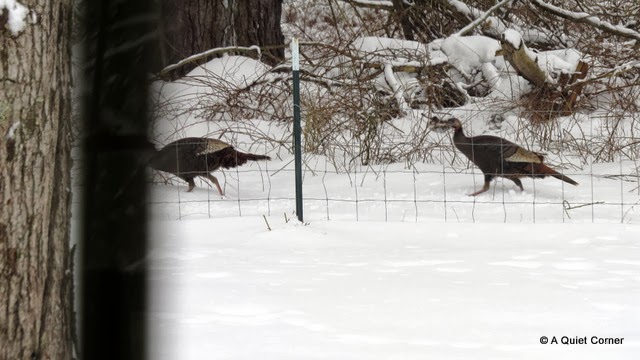 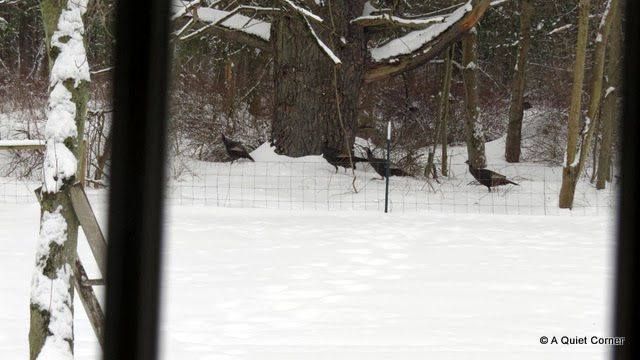 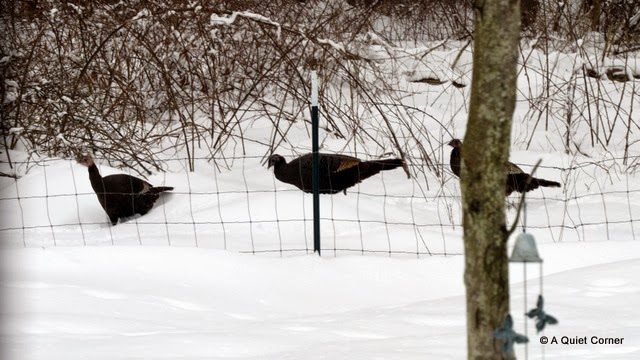 Then, racing through the snow, the whole gang was there.  They looked like big brown bugs, pecking away, while still more made their way through the thickets and along the trail. 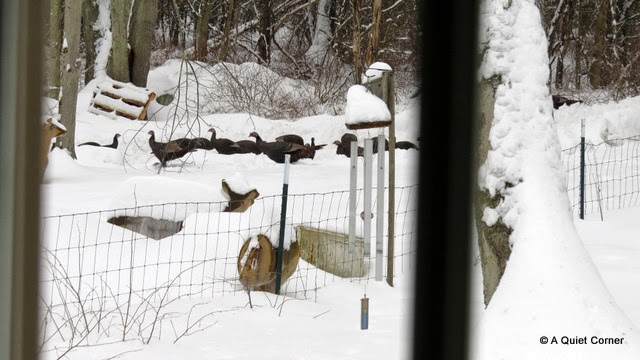 Then they got down right brazen.  They flew over the fence and attacked. 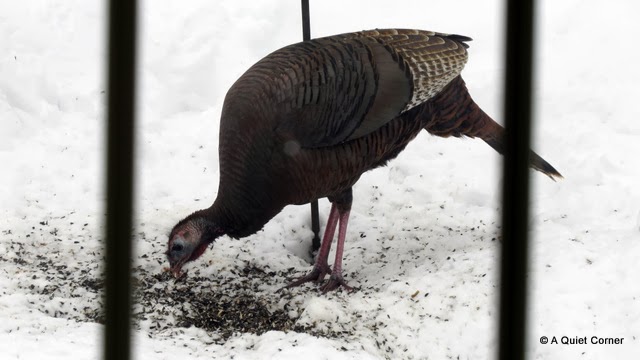 They scared away all my little birds...all the Juncos, the House Finches, the Eastern Towhees, the Nuthatches, the Chickadees, the Cardinals...all of them flew into the thickets. 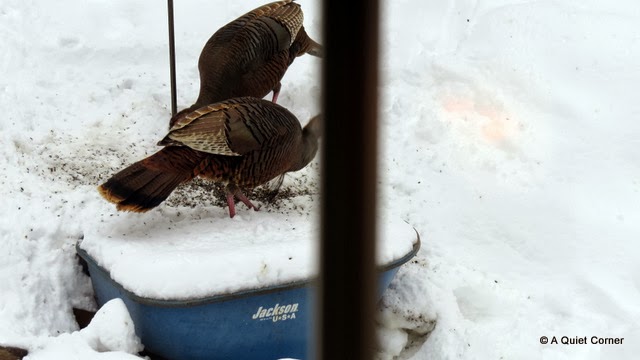 They scared away Bubba's cousin, Red! (he kept peeking out of the snow tunnel under the wheelbarrow!!) 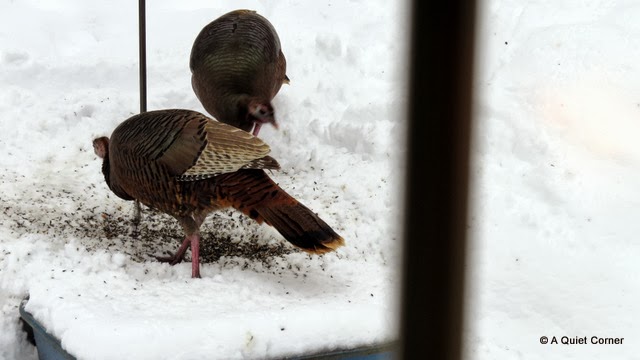 They even scared away the gray squirrels! Reaching up, one of them figured out that there was suet and seed stuck to the top of the baffle.  Watching her peck away at the savory feast, we were impressed by her intelligence.

Then another decided that she too would try the same thing.  Scaring the previous one away by chasing her, she returned to the feeders.

However...she was not the brightest bulb in the box! 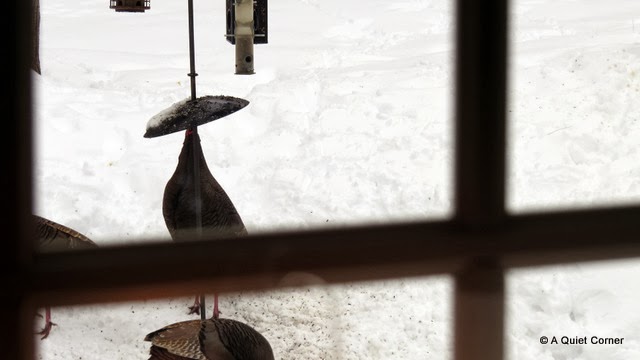 Dumbfounded, bewildered and repeatedly bumping her head on the underside, she just could not figure out how to get the goodies stuck on top of the baffle...LOL!!!


What made you laugh today?

~~~
Sharing this silly hen with you and

Buttons Thoughts said…
This made me laugh today Thank you I love turkeys even the not so clever ones:) Hug B
March 5, 2014 at 6:48 AM

Judith @ Lavender Cottage said…
I suppose if you plan to feed the birds, that means the wild turkeys must be included too. Even they have comical antics, which gave me a morning smile.
March 5, 2014 at 8:19 AM

Bee Lady said…
Funny! This made me laugh. But you know what...I'm in the mood for some belly-hurting, eye-watering, laughter. Last month I got it at our town's First Friday event, at my friend's studio. Going there again this Friday. Should be fun!

Jeanne said…
Love this "SHOW " of your wild turkeys, and bet they will be back to visit again. great shots! We have some of these at our mountain cabin, but rarely see them. Very shy guys around our house
March 5, 2014 at 9:15 AM

Light and Voices said…
Such a character banging its head over and over again. rofl. Cute blog post with the stages of turkeys feeding at your place. Love it!
JM Illinois
March 5, 2014 at 9:26 AM

TexWisGirl said…
made me laugh. reminds me of how chicken and turkey farmers have said they'll stand out in the rain and actually drown because they'll look up into the sky to watch the rain drops. not sure how much that actually happens...
March 5, 2014 at 9:55 AM

MorningAJ said…
There haven't been a lot of laughs today so thank you for sharing your silly hen!
March 5, 2014 at 1:28 PM

Mimsie said…
Your snowy world is SOOOOO different to ours down here in the southern hemisphere and I so enjoy sharing it with you.
Our summer in Perth is as usual extending right through into autumn with today 36ºC and tomorrow 38º (another century to add to the list).
I love to see your snowy pictures and the falling snow helps me to cool off just a tad. Thanks again. :)
March 5, 2014 at 11:31 PM

Jen said…
Well, they might not be genius, but they certainly are entertaining. They are even more fun when they start to display.
March 5, 2014 at 11:33 PM

Wsprsweetly Of Cottages said…
...which goes to show you, greed doesn't always pay off. Watching them must be as good as some TV shows and certainly better than world news lately. Matter of fact, the one that's not the brightest bulb in the box reminds me of some of our world leaders! :)
March 5, 2014 at 11:59 PM

In response to your latest post: I have pair of fishing rods that I was given on my 18th Birthday -which was a long time ago - but I wont be getting rid of them!

carol l mckenna said…
Great photos of the crazy birds hogging the corn ~ laughter is so good for the soul ~ thanks,