Spending quality time with my loved ones is, as you know, important to me.  That includes my dogs.  About two weeks ago, although spellbound by the eagles' activity that Tuesday, I told you the story of Moon, our Shepherd Husky being The Guardian.
~~~
Sunny and breezy the temps were in the mid-fifties and I was sitting out on the deck. Moon lay facing me about three feet from the base of my chair.  The sun cast such warm  shadows on Moon, I thought I'd snap a few pix of her basking in the sun with my iPad. She is so photogenic. 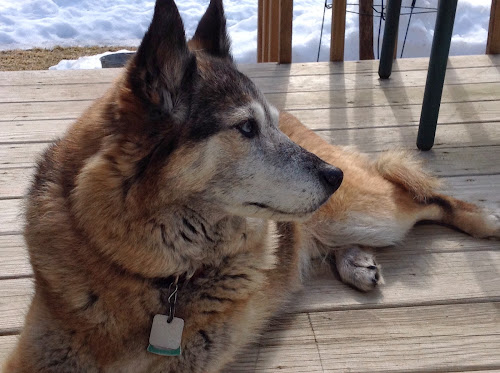 Still observing the eagles later that afternoon, I saw it return, this time perching high facing away from the feeders. After taking one pic, it dove into the neighboring thicket to nab it's prey with such angle and speed.  The only thing I heard was something squeaking in the thicket.  Nature is reality...perhaps that's why I love it so.

A fellow birder friend thinks this may be an American Kestrel, the smallest of the falcons, since it wasn't much bigger than a Dove.

Sharing a story, some sun and shadows with you and

Judith @ Lavender Cottage said…
Moon relaxing on the deck and bird activity revving up, spring must be close.
March 23, 2014 at 2:21 PM

My Little Home and Garden said…
Moon is a beautiful girl. The photo of her is so serene. What a contrast to all of the activity that took place in the thicket!

cedarmerefarm said…
Moon looks so calm and content sitting in the sun by your side. I think Moon agrees with you that it's important to her to spend time with those she loves.
March 23, 2014 at 4:54 PM

Lorrie said…
Beautiful photos. The kestrel is so majestic perched up there on the tree branch.

Blondie's Journal said…
Moon is absolutely beautiful...she has the best of both breeds.

Bee Lady said…
Beautiful pictures. I think those Kestrels can fly really fast, and doves are very slow....(sounds like a good book for kids!)

Ann said…
Yes, Moon is very photogenic. Lucky dog :)
As sad as it is that some poor little creature had to die, nature is fascinating even in it's brutal state
March 24, 2014 at 4:55 AM

nature ramblings said…
Nothing better than sitting in the warm sun with a good friend by your side!!! Wonderful shots!
March 24, 2014 at 10:41 AM