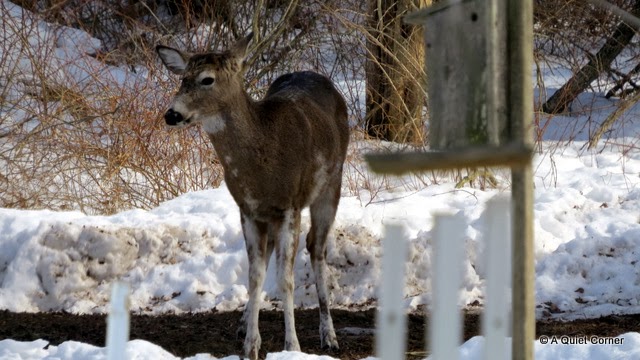 A piebald deer has been in our neck of the woods since we moved in over two years ago.  Although we hadn't seen her for a while, this year we were lucky.  Actually we were thinking this may be her fawn since the one we saw had a lot more white on it's belly. 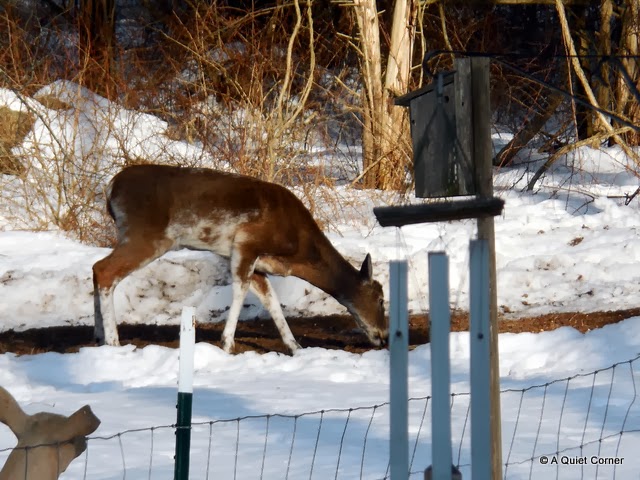 She's been coming in for nibblies before the rest of the herd, so although genetically deficient, her brain works just fine. 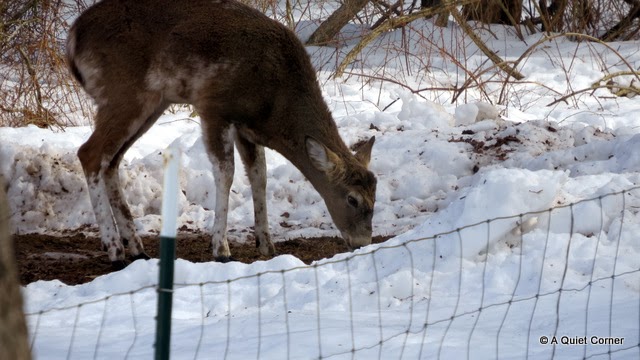 According to Wikipedia,
"A piebald deer is a deer with a brown and white spotting pattern which is not caused by parasites or diseases. They can appear to be almost entirely white. In addition to the non-standard coloration, other differences have been observed: bowing or Roman nose, overly arched spine (scoliosis), long tails, short legs, and underbites." 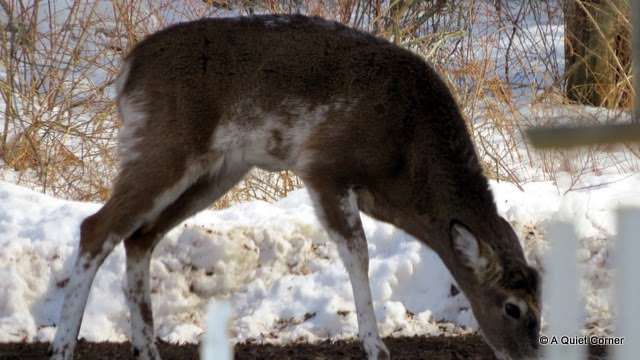 Personally, we think she's rather pretty...just another one of Mother Nature's wonders that stops by!

Don't you think she's a beauty?

eileeninmd said…
She is beautiful. Wonderful series of photos. Enjoy your weekend!
March 1, 2014 at 5:24 PM

Anonymous said…
She is pretty. My goodness..has it really been over two years since you moved there?
March 1, 2014 at 5:42 PM

Mimsie said…
She is lovely and it is sad to know that deer can suffer from scoliosis isn't it? My hubby has that problem but fortunately only mildly so.
I am not sure if you will read this comment or not but may I ask if you follow my blog? I have trouble at times knowing just who is who. No problem if you don't as I enjoy yours. Just asking.
March 2, 2014 at 12:10 AM

Anonymous said…
A beauty. I looked up at breakfast out the window and I seen a wolve
kitty corner to my window.

Wouldn't you know it. My camera was in the other room.

He was up to his knees in snow.

Tessa~ Here there be musing said…
Of course she is pretty!

And smart too, coming early to eat.

Beatrice P. Boyd said…
Sometimes the non-conformists, like this piebald deer, can be the most beautiful to see.
March 2, 2014 at 1:01 PM

diane said…
She IS a beauty!!!

Magical Mystical Teacher said…
Not everything needs to looks the same!