A few weeks ago I mentioned that I have five coffee pots.  To my surprise a lot of my readers asked me how and/or why.  So, to those who wondered, today, you get the answer...LOL!!

Back in 2003, before the Pres and I moved to Virginia, my BFFs (best forever friends in real life, not Facebook!!) lived in the same town we did.   She was the one that I would meet at the walking trail and walk ten miles with our German Shorthaired Pointers every Saturday and Sunday.  At that time, however, the Pres drank coffee so we used a traditional coffee maker that made up to twelve cups, which we still have.  We move.

Jump ahead to when we're living in Virginia. The Pres gives up coffee...just because...but not me.  Using the big coffee maker I would fill the reservoir with about 16 ounces of water and make my brew using ground coffee...until...I decided I wanted a change.

Driving up to Connecticut for visits, I usually stayed at my BFFs house in order to visit with them.  Plus, I got to sleep with Greta, their rescued boxer.   In the morning it was coffee for her and I, since we were both early birds, while her hubby slept in.  That's where I met my first love...her coffee maker.  It was always so good!!!!! So....

While I was there one visit, she wrote down the name, the web site, etc and when I got home I ordered ONE.  Carrying things a little further and since I had the time because I was now retired,  I began grinding my own coffee beans using my antique coffee grinder that my daughter had given me. 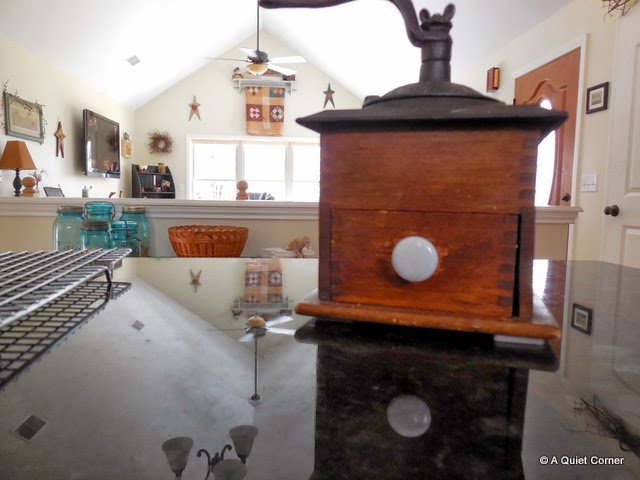 It was a match made in Heaven! The coffee tasted delicious...it was cheap...I mean inexpensive...it was perfect for just me!

And now I found that driving up to Connecticut to stay at my MILs, it was so easy to bring my coffee pot, since it was so small.  She fell for it...head over heel... and wanted one.   Promising to get her one, I ordered TWO. One for her and a "spare" for me (just on case). I gave Mom hers since she usually only made coffee for herself, making her larger coffee maker obsolete.

Yet, within a few months, Mom called me one day and told me her pot "died." Surprised because of the length of time my friends had theirs and how long I'd had mine, I felt confident and sent her my spare.

Fast forward once again to our move back to Connecticut, bringing ONE coffee pot (my old one...still going strong) with me.  It was all good.

Meanwhile, at our local hardware store in the flyer, guess what I saw on sale that week?   So, I went there and bought 3...one for my MIL (as a spare), one to give my best friend ( since hers was really getting on in years) and one for me (a spare, replacing the spare I gave Mom). I gave Mom her spare and stashed Bette's and mine in the hall closet downstairs...the closet where I put Alva and FORGOT ABOUT HER!!!

After my MIL passed away, my SIL gave us a box of "stuff" and in it was old photos of the Pres when he was young, a few family pictures and some of the Pres' military collectibles, along with FOUR COFFEE POTS!!!

The original pot I gave Mom...the broken one.  I imagine she saved it because it was a gift.  That's how Mom was!

The spare (new in the box) that I gave her once we moved back to CT. (1)
The one she was using (still in great working order)...my first spare. (2)
And, Mom apparently had found one at her hardware store which she bought...just in case(?) (3)

Well when I went to put Mom's away, I came across the two I had tucked away because now I had FIVE after throwing away the broken one!! 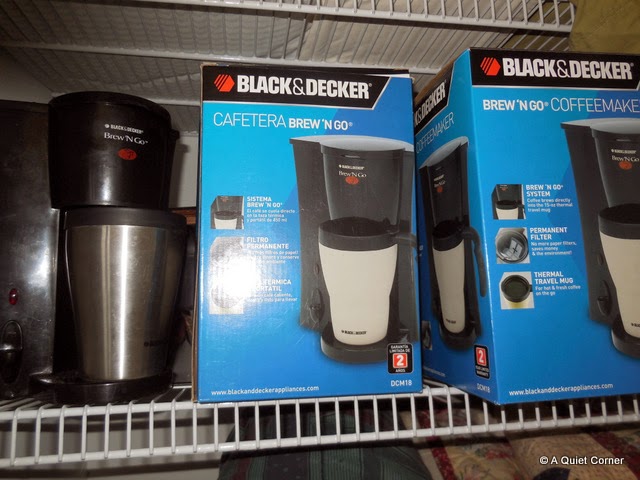 So, although I like to have "A" spare or backup of something I like, now I have extras...for years and years of enjoyment because I only drink one cup a day!!

Anyway, if you're looking for an inexpensive single cup coffee maker, I would highly recommend them. They come with a thermal mug which holds a 16 oz and has a secure lid.  Although I use liners in the basket, it can be used with or without filters. 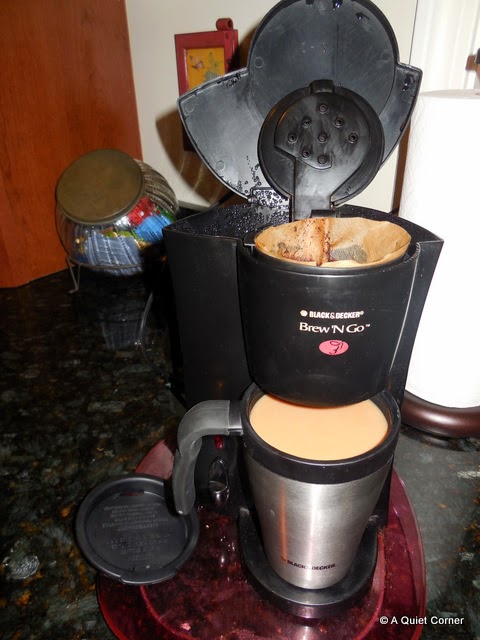 I know several people that have the Keurig Coffee Makers and buying the k cups gets expensive and to me it became a trend. I never liked trends. I never followed the crowd. I like being my own person...even if I have a lot of pots...:)


A little embarrassed at having five, yet still sharing with you and those at

Do you have any "spares"?
Email Post
Labels: Family Friends Gifts

MorningAJ said…
I LOVE that antique grinder. We went everywhere looking for one a few years ago because I love to wind the handle and smell the beans as they turn to grounds. But K says it takes too long and is hard on the arms (wimp!) so he uses an electric grinder. I love the look of my antique though. I'm glad yours actually gets used.

Sandra said…
we have one spare, the spare is just a 9.99 Mr. Coffee that we always took to GA when we visited my parents because they only drank instant which gags me. mother died in 1990 so that means we have had it since about 1986. when we went on vacation twice a year to Ormond Beach we took it with us, but then they put one in the room, so it is in the cabinet as a spare or just in case emergency...
March 27, 2014 at 8:15 AM

E. said…
i love how tiny it is ... neat. my parents are coffee maker freaks. meaning they have several. they usually take them to GoodWill ... not clue what will be next with them. ha. ha!! they always get into certain new hobbies. gosh years ago they loved this coffee drink called a "brain freeze". it was delicious. a powder. so yummy. how i miss it. they have not gotten any for years. ( :
March 27, 2014 at 8:30 PM

Ann said…
well at least you will never be without a cup of coffee :)
My husband was going to buy me a Keurig for Christmas and I told him not to bother because I'm too cheap to buy the k-cups. I drink too much coffee for that to be affordable
March 28, 2014 at 4:57 AM

Katherines Corner said…
giggle, love this. I had a back up blow dryer ( had to use it the other day when mine sparked out) Now I need another back up :-) Thank you for sharing your lovely blog at the Thursday Favorite Things Blog Hop xo