It was a sunny and breezy with the winds out of the southwest. With temperatures in the mid fifties, Moon, Copper and I sat on the deck enjoying the fresh air. As Moon lay in front of me sunning herself, I snapped a pic or two with my iPad. 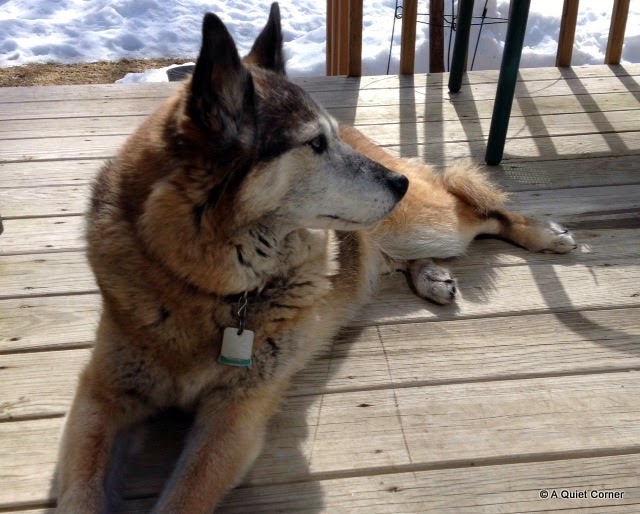 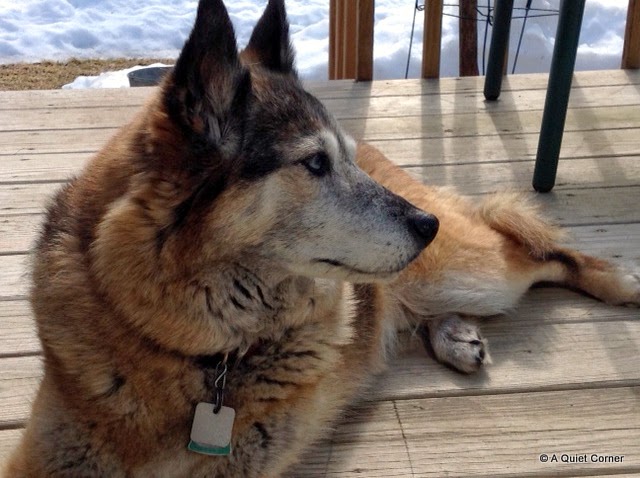 Focusing in on her for the third snap, her head began to tip upward toward the trees. 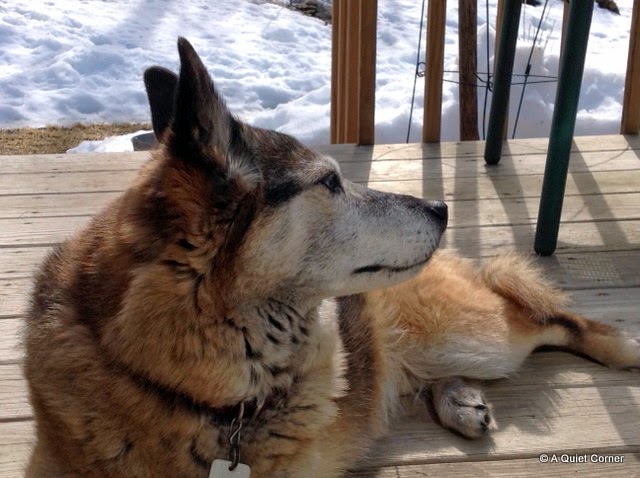 Following her line of sight, I saw it too. A falcon (Sharp Shinned or Cooper's) had just landed.  Perched in a small tree bordering the yard and facing the feeders, Moon wasn't happy.

Still looking upward, she growled and the falcon immediately spread it's wings. Not a second later, she was barking at it as it sailed passed us veering off into the thick woods.
I wonder why she barked at it???

Later that day, I not only spotted an immature eagle flying over our yard but our resident adults!!!  I took tons of pix and ended up...
doing the HAPPY DANCE right before I left for Tai Chi.

When was the last time YOU did the HAPPY DANCE????

Sharing more nuttiness with you and those at

Beatrice P. Boyd said…
Moon was a very good subject, JP, and did a good deed in scaring off that hawk too. Seems like everyone is doing a Happy dance due to Pharrell Williams hit song. i get all kinds of happy listening to it on the treadmill at the Y.
March 22, 2014 at 7:11 AM

Ann said…
Moon didn't want any of the sweet little bird friends getting eaten.
My last happy dance was yesterday morning when I didn't have to go to work
March 22, 2014 at 7:16 AM

trav4adventures said…
Very good! We spent a week a few summers ago in Central Arizona, at 8,000 feet up on the Mogollon Rim. We rented a cabin. A mother Cooper's hawk and 2 teenagers lived in the area. One teenager went flying off apparently without permission one morning and she screeched the entire morning! It returned that evening and I'm sure it got an earful! They were interesting to watch and now we have a pair in our neighborhood here in the desert. However, they prey upon the morning doves...sigh...they also got our resident scrub jay. They apparently nest a couple of blocks away, down at the date groves in our local community college. Maybe I'll go looking for them next week when I'm off for SPRING BREAK!
Cheryl Ann
March 22, 2014 at 8:05 AM

TexWisGirl said…
she's so pretty. my dogs bark at vultures because they don't like how they smell. wonder if the hawk smelled like roadkill. :)
March 22, 2014 at 10:37 AM

MorningAJ said…
Seems like a while since I did a Happy Dance. I'm working on improving my mood though. These lovely photos of Moon have helped though. She's a lovely dog.
March 22, 2014 at 4:35 PM

eileeninmd said…
Your Dog is beautiful, lovely photos.. Maybe, Moon is protective of and did not like the hawk in her yard. Thank you for linking up with Saturday's Critters.. Have a happy weekend!
March 22, 2014 at 7:51 PM

Judith @ Lavender Cottage said…
A nice, protective looking dog. Mine took off after a rabbit yesterday and when he got too close, was scared and ran off the other way.
I can't remember my last happy dance, I'll have to find an occasion for one.
March 22, 2014 at 8:51 PM