Well, she decided to call her step Dad who came right over and since they only live a mile away, he was at the house in no time...pouring rain and all.  I think it was then that she learned that Moon and Copper don't like being out in the driving rain...at least that's what Moon and Copper told me! 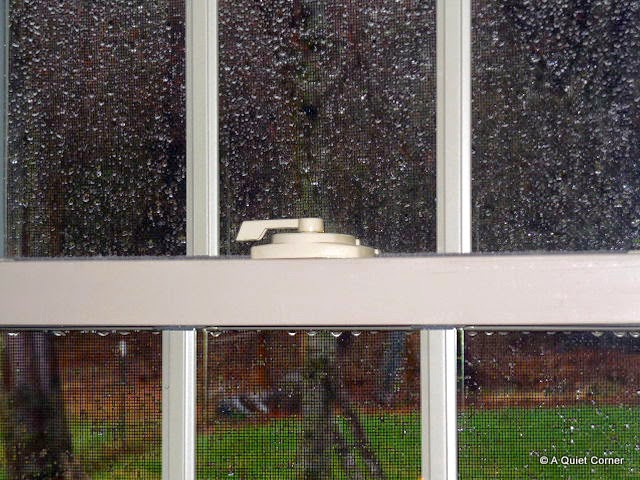 It seemed easy enough, her step Dad thought.  He said, "Let's get the code to the garage keypad and we'll be golden."

When I suggested to the Pres that I give her that code (just in case), the Pres smirked and said, "Honey, why does she need that?  She's got the house key and the opener.  She'll be fine."

Then her step Dad, suggested that they call OS (other son).  He must have the code to the garage.  So they did.  Only thing was that Corey didn't answer his phone right away and when he did, he couldn't remember the code to the blooming garage!

Still raining...pouring...the dogs are hiding out in their condos and the sitter and her step Dad are drenched.

Suddenly her step Dad spots the Pres' truck and sees a GARAGE DOOR OPENER clipped to the visor.  Deciding to run home and get the slim jim to break into the old red Dodge Diesel, the problem would soon be no more.

He did the deed...broke into the Pres' truck.  The sitter got into the house.  And Moon and Copper were dried off with the clean fluffy towels Mommy left...just in case.

Judith @ Lavender Cottage said…
Now that was a lucky break to find an extra remote garage opener.Talk about a comedy of errors!
April 23, 2014 at 8:50 AM

Angela said…
Yikes! I don't know that I would have wanted them to break into my vehicle to grab the other remote to get in.... When we go on vacation we take the remotes out of the vehicle that stays out of the garage and we also take the keys with us.
April 23, 2014 at 11:14 PM

cedarmerefarm said…
Good thinking DaddyO! I was wondering whether they ever got inside the house.
April 27, 2014 at 7:07 AM