Walking the beach while on vacation, I saw a few people with dogs in the distance.  Using my camera's zoom to take a closer look, I intentionally headed that way.  Curious to see what they were doing, I walked up to a slender blonde woman wearing a wetsuit and asked if I could take a few pictures.

After introducing myself and we began talking, I discovered that she and her husband train police dogs and are from the Netherlands!!  Standing side by side and trading stories, we watched the dogs come out, one by one, and attack their subjects (her husband and a few others) waiting in the water. 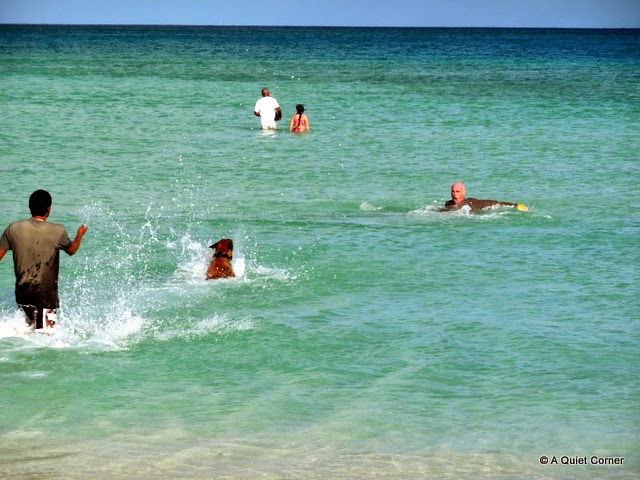 She explained that once the dog latches on, the "bad guys" hit, kick and literally push and hold the dog under water in an effort to get it to release...mirroring the actions of a real "bad guy."   Training the dogs to NOT release regardless of what is done to them, they try to react and re-enact as a real perpetrator would.  In fact, they reward the dogs for being courageous, relentless and fearless. 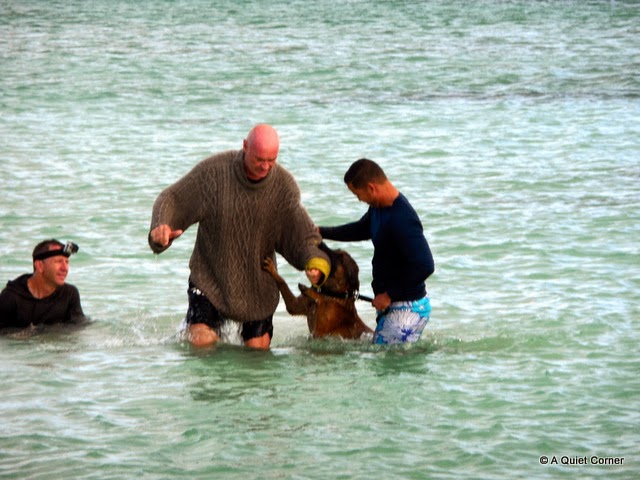 The training not only takes place on land but also from a boat since these dogs are used primarily for drug trafficking. They only accept dogs with specific backgrounds, stamina and "heart," knowing that they cannot be a quitter nor be discouraged regardless of how their perpetrator treats them. 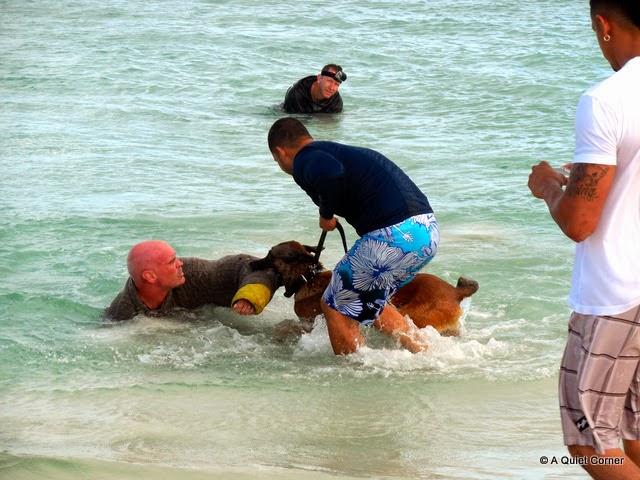 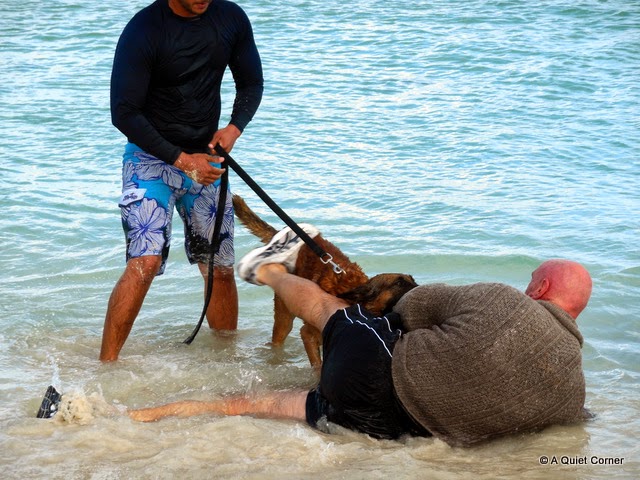 Each dog (mostly Shepherds) shows off their working skills and once given the command to "release," watches intently as the "officers" close in on the perpetrator.  Exhausted and breathing hard from the battle in the water, they remain willing, vigilant and eager to pitch in when the need arises. 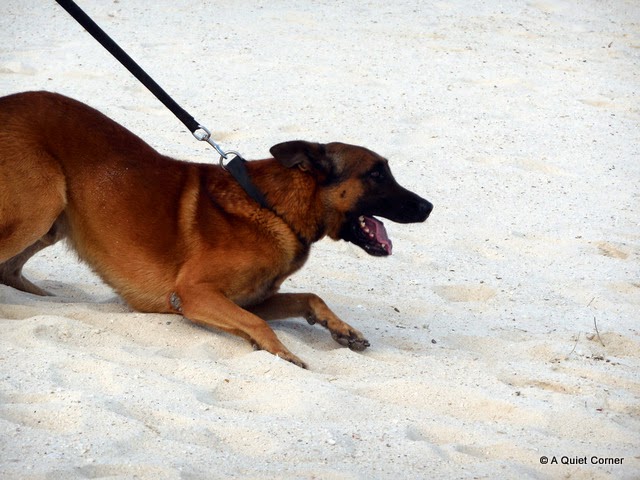 Asking me to stay to her right side, Bianca explains that if on her left, the dog will attack me!  She then goes to get her dog. 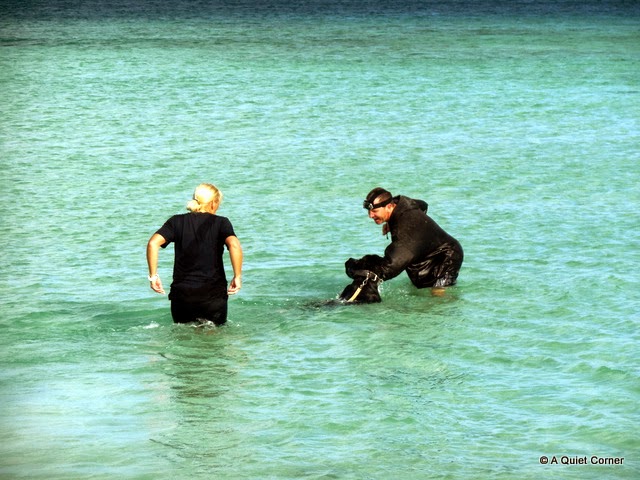 Wrestling with the first perpetrator on his way to the primary target, he swims tirelessly to reach Dick, the "bad guy."  Once again, Dick raises his well-padded arm and forces the dog underwater holding it under for what seemed an eternity.  As I watch and see that the dog remains attached when his arm comes up, I smile and find myself muttering, "good boy," knowing he will be well rewarded. 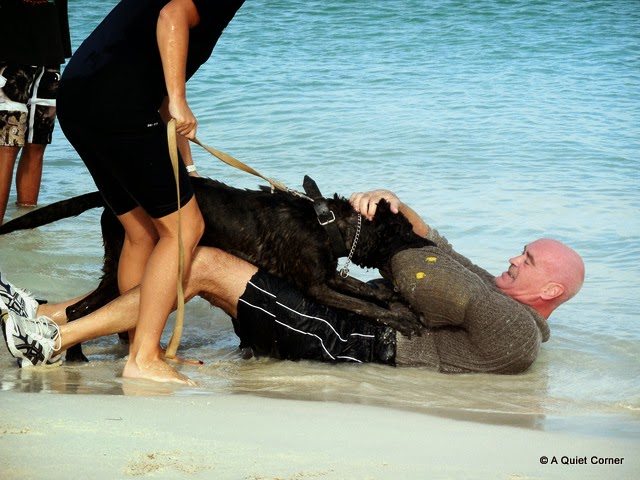 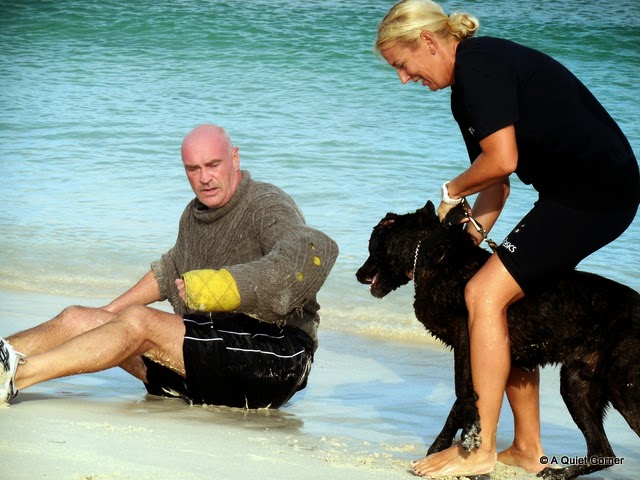 When it came time for me to leave, Bianca called out to Dick, who was still in the water, to say "good-bye." 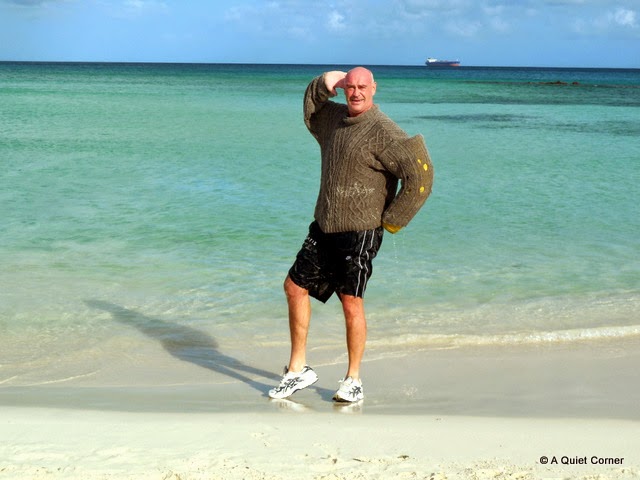 So, to my new friends, Bianca and Dick, I send my love...lots of hugs and smiles and a sincere "thank you" for inviting me into your world!

Naquillity said…
what an awesome story you've shared from your vacation. it's nice to know they are rewarded for all their hard work. i'm sure they'll one day catch lots of bad guys... hope all is well. have a great day~
April 26, 2014 at 10:52 AM

eileeninmd said…
I would love to have watch this lesson going on at the beach! They are some smart dogs. Great photos.
Thanks for sharing your post with my critter party. Have a happy weekend!
April 26, 2014 at 11:26 AM

Margaret Birding For Pleasure said…
Fascinating post with great photographs. Have a wonderful weekend.
April 26, 2014 at 11:32 AM

Ida said…
Wow that was fascinating. I would have been a bit scared about making sure I stood on the right side so as not to have been attacked.
April 26, 2014 at 2:26 PM

Ginny Hartzler said…
What a wonderful meeting at the beach!!! This is awesome and you got great pictures of the whole process.
April 26, 2014 at 2:30 PM

Rambling Woods said…
Dogs are amazing with the diversity of skills they can learn
April 26, 2014 at 6:37 PM

Stewart M said…
I think the dog had the best of it on this occasion!

cedarmerefarm said…
Thank you for sharing that story. It was very interesting. Dogs are such special animals.
April 27, 2014 at 6:59 AM

Anonymous said…
How fascinating! It certainly does highlight how much work goes into being a working dog.
April 29, 2014 at 2:47 PM