The cookout was this past Sunday.  The Pres and I were ready for anything....we thought.

First to arrive were my BFFs...Fred and Wilma from nearby Bedrock, who brought us a great gift basket filled with all the things we love!  She knows that the Pres and I are food driven and that the beer, coconut bars and crackers will be put to good use!

Now, it's important that you remember that Wilma had been assigned the task of helping me. Talking about where we wanted what to go and when, the plan was ready. Remember those words too...THE PLAN. 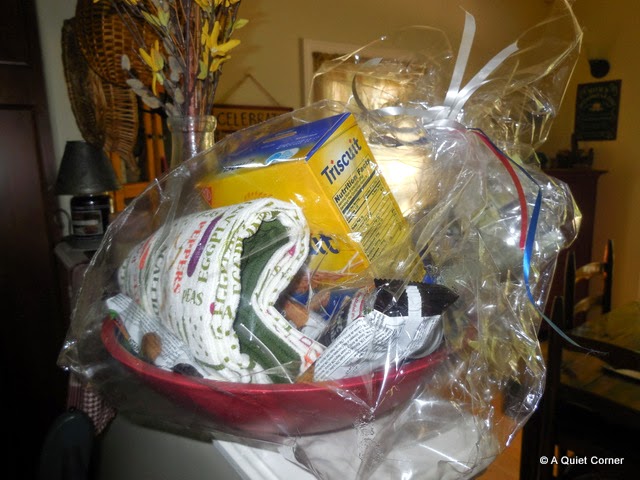 As we sat comfortably, I told Fred and Wilma that they were also in charge of PR and pix (considering my BFF has a degree in Communication and he's a published writer). Wilma was also assigned the task of...lets say it again...helping me.

So now for a recap of how the day went.
Hmmmm, since I am still on cloud nine that everyone came, I may not get all the details or timing correct but you'll get the gist.

First I heard Corey (OS) in the driveway with his Harley.  Greeting him with a hug then ushering him in, I waited outside to greet Emory and Jeannine (Tai Chi), pulling up the gravel road.

Dawn (who I worked with at the bank) and her hubby Bill (one of my banking customers before he met and married her!). Good gravy I jumped all over Bill, who I haven't seen since a party we had nearly twenty years ago!!! They have two girls both graduates, both beautiful and awesome like Dawn.  They brought lots of food to share...from appetizer to dessert!!

Opening the door to see Kim and Buzzy standing there, my eyes just welled right up. More awesome ladies from the bank that I met back in 1802! These gals knew me when I was broke, knew what I went through raising two kids alone. We go way back...well...to 1802!

Stephanie (the gym) and her husband "Chuck" ( a private joke because his real name is Jeff...but another story) arrived with individual plastic cups of taco layered dip! Too flippin' adorable!!! Whispering in her ear, I asked her to sneak outside and hide one in my frig for me for later. Turns out, it was the only thing I ate other than a few mouthfuls of yellow squash casserole. Delicious!!!!

Then Dave and Joyce (Tai Chi) with a big batch of her famous chocolate chip cookies and Roz (from the gym) with not only an awesome cucumber pasta salad (which is just awesome!!) but a bag full of homemade dog biscuits for Moon and Copper!  She obviously knows how to get to my heart quickly!!!!

Hmmmm...wonder where Wilma is as I handed appetizers to others now helping me. 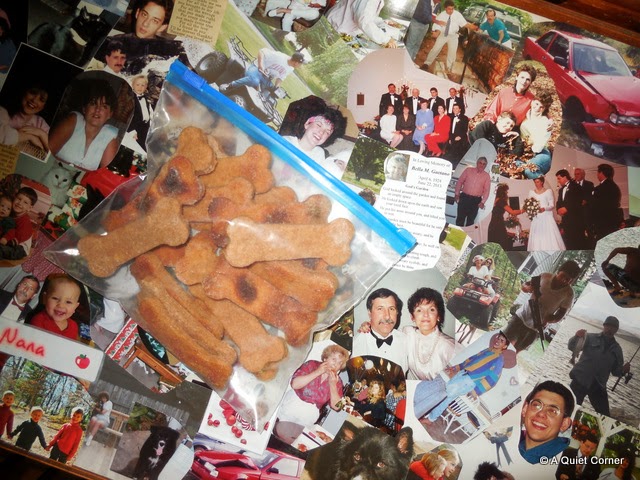 Suddenly out on the deck, there was Spurrie (not her real name) who also knew me when I began at the bank in 1981!!! Grabbing hold of her hand and leading her around the house, my heart felt like it was going to burst as she told me how nicely the house was decorated...:)

Nope...still no sign of WIlma.
Wonder where she was? 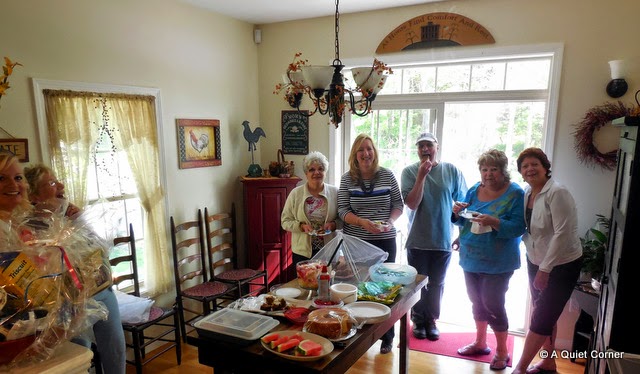 Okay. Have you got the picture here so far?  I was so busy greeting my friends, who the heck had time for the PLAN?

And where was my helper, Wilma?????
Well, it turns out that Wilma was missing in action...she was busy socializing!

Before I knew it Marty and Tammy, Sarah and Kyle, Joe, his fiancée, their eleven day old baby...yes, the most beautiful little girl you can imagine...arrived with his two adopted children, Dee and Aiden. Joe adopted them because he didn't want them to end up in "the system." I nearly cried when I heard that and gave Aiden lots of goodies to take home with him (age 6), the most polite little boy I have ever met!!!

Hmmmm...the PLAN???? Where was the PLAN? What WAS the PLAN?
Where was Wilma?

Then Ken (Tia Chi) appeared out of nowhere soon followed by "The Boss" (Tai Chi instructor) pushing his granddaughter, now ten months (Meadow, born weighing two pounds!)!!!  Not long after that, Ryan, Sharon and Andrew from next door walked in.

The appetizers went out and were refilled.  Then it was time for the food and desserts.  Before long the day was coming to a close.

The weather couldn't have been better, the food was great everyone said, the company was even better!

Hmmm...one more thing.  There are no pictures, other than the ONE I took!  Wilma was too busy enjoying herself...:)

However, we had guests that were uninvited too. You know those that just drop in unexpected and uninvited. 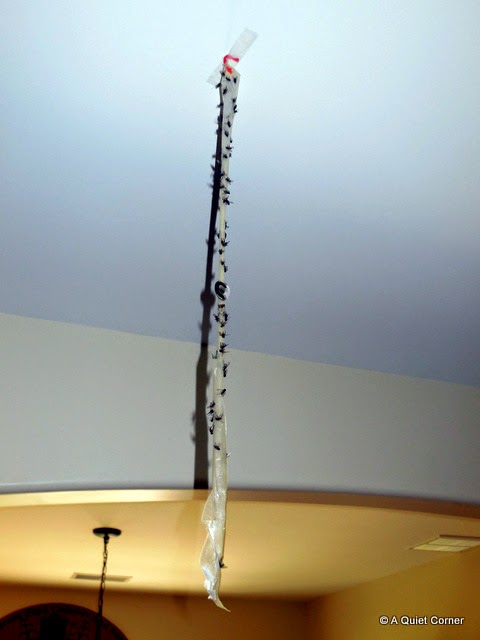 So we did the best we could with what we had.  My BIL helped me put up fly strips to catch the uninvited guests who snuck in through the screen door each time it was opened!!!!

Sharing with you and those at
Friendship Friday
Email Post
Labels: Family Friends Fun Memories

Ann said…
Sounds like a totally delightful day.
The last time we had a picnic here my house was so full of flies it was disgusting.
May 23, 2014 at 6:21 PM