Last week when I went in to see the eagles, I couldn't wait to email my findings to Kate (Division of Wildlife).  That evening as I composed my email and hit send, I hoped that she would be able to read the excitement in my words:

When I got to the clearing and took my pic of the view, I saw no "lump" sitting in the distant pine tree as I did last week, so, after settling down on the ground, I focused on the nest.  Using the binoculars first, I saw a cluster of dark wet leaves flapping in the breeze on the right side of the nest.  Raising zoomer and taking a pic of that side, my eyes then moved to the left side of the nest.  I saw nothing but just sat quietly waiting.

Sitting there on the ground indian style and gazing up in the direction of the nest, a tickle in my throat surfaced (allergies).  Now, getting a tad more annoying, I stifled a cough.  I really just couldn't help it and it was that noise that disturbed them.

It was then that what I thought was a leaf flapping in the breeze grew larger.  As I watched in amazement, an adult spread it's wings, flapped twice and was airborne landing in another pine nearby!  To me an adult in the nest means CHICK!!!

And if that wasn't enough...

movement on the left side of the nest!  A chick...a very well-developed chick..began to rise and stretch it's massive wings before then settling back down below the rim of the nest.  And let me tell you, it's mottled brown and white wingspan was huge!!!

And if that wasn't enough...

the second adult flew in from behind and landed in a tree directly above my head...about twenty feet above my head!   In fact, I tried to raise the camera and lean backwards to snap a pic but felt like I was going to tip over so I gave up.  By the time I turned back, the adult was off to another pine.  However, I did get this shot just as it was ready for liftoff.  It's not the best, but I'm happy with it. 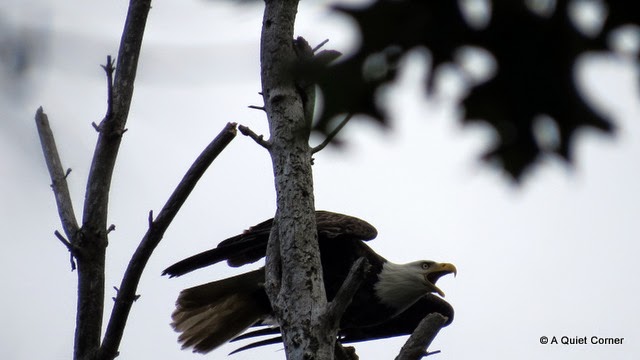 Did you know that a chick will be nearly two feet tall when it's ready
to fledge at 11-12 weeks?

Did you know that typically a pair of eagles will have almost the same schedule for laying, hatching and raising their young year to year? 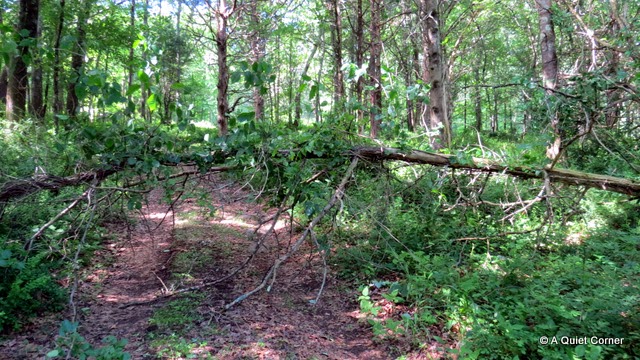 Did I tell you a tree was down across the path and I had to crouch down to get through?

Do you think Kate felt my excitement?

Gosh, it was a great day!

Beatrice P. Boyd said…
We tried to see the eagles nest during our recent bike outings to Chincoteague NWR but they were too far, so you have been much luckier, JP.
June 24, 2014 at 7:18 AM

Monkeywrangler said…
What a great photo! Thanks for post ing it. I have seen nesting eagles once, and flying eagles in KS many times, but never gotten a picture of it all.
June 24, 2014 at 7:44 AM

Linda said…
And I was excited when our baby swallow flapped its wings yesterday! I was ready to say The Pledge of Allegiance when I saw your great photo! What a great shot, thanks to allergies! Linda@Wetcreek Blog
June 24, 2014 at 1:32 PM

Ginny Hartzler said…
I felt it, so I think she felt it. This picture is amazing, it looks like the one they have on stamps and the picture for the Post Office logo. His mouth is wide open, so I think he is scolding you properly!
June 24, 2014 at 2:04 PM

Ann said…
If your email to Kate was anything like this post I'm pretty sure she could read your excitement because I sure could.
That is a pretty great shot of the eagle too
June 24, 2014 at 2:58 PM

valerietilsten59.blogspot.com said…
Indeed , I am sure Kate was excited JP.
I would have been elated to see Eagles in my trees.
Your photo is amazing.. good shot.
I am sure you will be cutting the tree for winter fuel! its already fallen for you.
Happy week.
val xx
June 24, 2014 at 4:29 PM

Rambling Woods said…
That you got the photo is wonderful. I didn't know any of that about eagles. That is a long time in the nest... Perfect for Nature Notes... Michelle
June 24, 2014 at 5:23 PM

eileeninmd said…
What a great eagle story.. So glad they are there and the eaglets are doing well. I am excited for you! Have a happy week!
June 24, 2014 at 5:33 PM

My Little Home and Garden said…
You've expressed the thrill and excitement you felt through your writing. What an experience!