Remember the small feather that floated down to the ground a few weeks ago. Well, sending the picture of it along with how I found it to DEEP, I received an email.  I was urged to Google the Eagle Protection Act and wow! What an eye opener!!!

DId you know....
"...The Bald and Golden Eagle Protection Act (16 U.S.C. 668-668d) is a legislation in the United States of America that protects two species of eagle. The Bald Eagle was chosen as a national emblem of the United States by the Continental Congress of 1782 and was given legal protection by the Bald Eagle Protection Act of 1940. This act was expanded to include the Golden Eagle in 1962.[1] Since the original Act, the Bald and Golden Eagle Protection Act has been amended several times. It currently prohibits anyone, without a permit issued by the Secretary of the Interior, from "taking" bald eagles. Taking is described to include their parts, nests, or eggs, molesting or disturbing the birds. The Act provides criminal penalties for persons who "take, possess, sell, purchase, barter, offer to sell, purchase or barter, transport, export or import, at any time or any manner, any bald eagle ... [or any golden eagle], alive or dead, or any part, nest, or egg thereof."[2]

The purpose of the Bald and Golden Eagle Protection act is to not agitate the Bald and Golden Eagle to the extent of not 1.) Abusing an eagle, 2.) Interfering with its substantial lifestyle, including shelter, breeding, feeding, or 3.) Nest abandonment.[3] The Eagle feathers have been collected and incorporated into clothing, art, jewelry, etc. In addition, having the possession, exchange, or sale of Bald Eagle feathers violates the act if no permit is obtained. The basic structure of the act resembles the Migratory Bird Treaty Act..."

Bottom line here is that according to Kate, I am not supposed to have it and although I picked it up innocently enough, unaware of the laws, it has to returned.

Apparently, since I am not a Native American, it is unlawful to be in my possession. So, like the Princess in Frozen, I have to Let It Go (and I don't mean just the feather). 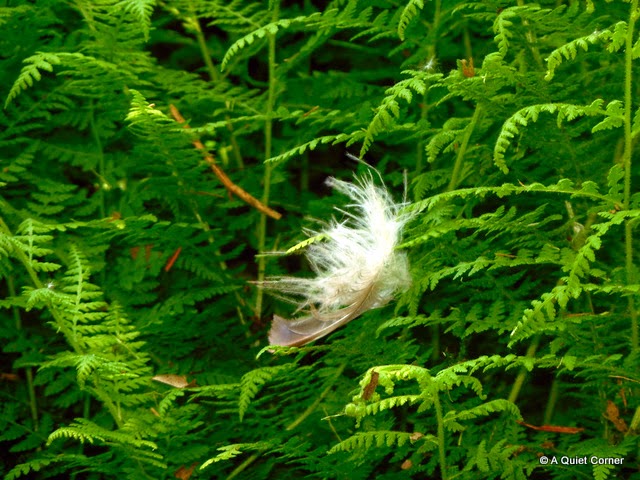 Set it free to float wherever the wind carries it, I thought. So, that's just what I did and as silly as this may sound, it made me sad.  After all I was born here too (oops...just sayin').  What made it worse was that it clung to a cluster of ferns for the longest time before the wind carried it away.

But it's done and as you can tell, I still have some letting go to work on.

Sharing the right thing to do with you and those at

Monkeywrangler said…
Yeah, kind of silly when the feather was naturally lost, and innocently found. Glad you got to enjoy it briefly though.
June 10, 2014 at 7:36 AM

Anonymous said…
A law is a law but I have to say, it sounds kind of silly to me that a feather the eagle didn't want anymore can't be picked up and taken home. At least you have the photo and the memory of how it felt in your hand.
June 10, 2014 at 7:51 AM

MorningAJ said…
I get why they need the law. But it seems a shame that you can't keep the feather. You can't even offer it to a Native American (because you'd be 'sell, trade or barter'-ing it, wouldn't you?) I found a pigeon feather on my car yesterday and I was over the moon (and pigeons are officially vermin!) I can't imagine how I'd feel if I had to let go of something really special that fell into my hands. {{hugs}}
June 10, 2014 at 8:53 AM

MadSnapper said…
i knew this because in our state parks here in FL it is unlawful to remove anything from the parks, wood, greens, plants and feathers... any feathers at all... once we saw aman picking sea oats at the beach, he had an arm full. i said if they catch you with those it is a 500 dollar fine and possible prison.. he threw them down, but he had already done the damage. people don't read the posted signs
June 10, 2014 at 10:51 AM

Ginny Hartzler said…
We went to an eagle show a few weeks ago, and the wildlife keeper told the audience that all the feathers that had fallen could not be kept and had to be given to her, it was the law! I can see how this law came about, because people would kill them and keep the feathers. But if you just happen to FIND one, that is really a bit much!
June 10, 2014 at 2:00 PM

eileeninmd said…
Sorry,you had to return the feather. You found it on the ground..It seems a little silly to me, it wasn't like you went and plucked out of the eagle. I think some of this law should be changed.. Enjoy your week!
June 10, 2014 at 4:55 PM

eileeninmd said…
Sorry,you had to return the feather. You found it on the ground..It seems a little silly to me, it wasn't like you went and plucked out of the eagle. I think some of this law should be changed.. Enjoy your week!
June 10, 2014 at 4:56 PM

Ann said…
I can understand protecting the eagles and their nests and it being illegal to capture them and or take their feathers. I don't quite get not being able to have a feather that you found on the ground.
June 10, 2014 at 6:27 PM

Angela said…
I had heard of that silly law, but I don't remember where I heard it from. I don't think it is right myself. It's a feather! It's not like you captured the Eagle and had it in a cage inside your home!
June 10, 2014 at 8:48 PM

Rambling Woods said…
Thank you for sharing this. It is also a concern that you can bring home some tiny passenger on a feather. It may seem silly to some I know.... Michelle
June 10, 2014 at 10:16 PM

Margaret Birding For Pleasure said…
thank you for sharing all the information today. I never knew all this however if it is the law, then you did the right thing, You will have the memory and photographs and that will be enough.
June 11, 2014 at 4:52 AM

Stewart M said…
Very creative way to include the Frozen "ear worm" into you post!!

Hope all is well.