All his words sit in my head and then I wonder...then wonder turns to worry.
There has been a lot of activity in our neck of the woods.  The third home is being built by OS and his crew.  Another homeowner is having a three car garage built after re-doing their driveway.  The young couple who bought the house down the gravel road is having trees cut and limbs chipped.

Hmmmm?  I wonder if I haven't heard the eagles because of all the noise???  I am concerned that they are having a difficult time this year and that they'll move elsewhere.

Did you know that eagles are easily disturbed by unpredictable human activity?

Did you know that disturbances at/around the nesting area may cause adult eagles to abandon their nest even if there are eggs or young in the nest?

Did you know that adults are more easily disturbed than juveniles?

This week Monday was very rainy. Silence from the woods.

Tuesday and Wednesday were beautiful days and I heard chatter....a good sign that there is still activity around the nest!

And today, again...silence so I decided to see for myself.

Walking in towards the clearing, I heard nothing from the eagles. No chirping. No alarm. Nothing. I even walked up closer toward the nest and using zoomer, snapped a pic.  As I hit the shutter button, I said out loud, "The nest is abandoned." I saw nothing. Heard nothing.

It had just stopped raining when I walked in and now there was a slight breeze. While looking at the concentration of poop at the base of a tree not far from the nest, I noticed something floating down from the cluster of pines.

Keeping my eyes focused on it until it landed in the tall grass about fifty feet away from me, I headed toward it and carefully tucked it in my right pocket. It gave me hope. 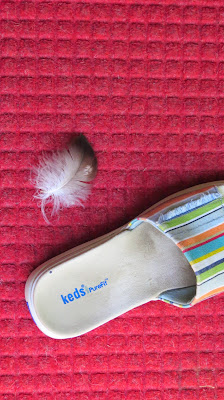 A feather, a fluffy perfect little feather about two and one half inches long, had been blown from the nest.  Watching it spiral down riding the breeze told me not to give up.

Right after I tucked the fragile specimen away, I turned to head home.  An there, about twenty five feet over my head, was an adult announcing it's presence as it then headed straight for the nest.

I left smiling, feeling renewed and hopeful, anxious to share the moment with the Pres.

Sitting out on the deck as I told him what happened, the silence ended. There was continuous squawking for almost two minutes and my smile was back.


Sharing with you and

Judith @ Lavender Cottage said…
I'm glad you found evidence that the nest is still in use. Apparently Ospreys are the same and will abandon their nest if stressed. A telephoto lens has to be used from a safe distance as I did last year. I'll bet the average person wouldn't know this and would try to get as close as possible for photos.
June 2, 2014 at 7:42 AM

Chris K in Wisconsin said…
We have eagles along the Wisconsin River which runs through our little town. There are many regulations regarding those eagles. For instance, when someone wanted to construct, along the river, a small shopping area with about 8 condos above, they had to agree that the balconies can not be used from Oct. 15 through March 15 so the eagles aren't startled. They are beautiful, aren't they?
June 2, 2014 at 11:47 AM

Pamela Gordon said…
I'm so glad the eagles have stayed around your area even with all the noise of construction. I didn't know that they'd abandon a nest due to interference.
June 2, 2014 at 3:01 PM

Ann said…
Glad to hear they are still there. I didn't know all that stuff about them. I can relate to being easily disturbed though :)
June 2, 2014 at 3:09 PM

Mimsie said…
Big sigh of relief knowing the eagles are OK.
I can imagine they are going to be a little put out and cautious with so much building going on and one can only hope they won't be driven from their home.
Our city of Perth has spread out alarmingly over the past 20 years and many wild birds have lost their homes. One sometimes wonders where it will all stop.
June 3, 2014 at 7:38 AM

Anonymous said…
Oh, there is hope! Last year there was an Eagle who lived across the river, but I have only seen him once this year. I'm bummed about that, as I became fairly attached to watching him.
June 5, 2014 at 4:11 PM

barbara l. hale said…
I know that there are eagles in these parts and you aren't so very far away from where we live. But I haven't been lucky enough to see any around the Sturbridge area. We have seen them on occasion flying around Quabbin, but only at a distance. It was special for us to see the eagle fledgling on PEI. Certainly, it was an experience I will always treasure. Thanks for stopping by my blog.
September 2, 2014 at 4:07 PM