It was while the Pres was in the kitchen working on supper and I had just finished folding laundry downstairs when I heard Moon. She, as usual, let out one bark...a signal woof, which usually means I'm hungry. Yet, a few seconds later another woof.

Something was wrong. It wasn't a constant vocal alert but rather, "Mom, get out here now!"

Going to the kitchen window over the sink where the Pres was to see what she wanted, I spotted it immediately. I couldn't make out what it was because I wasn't wearing my glasses. All I could tell was that it was big. 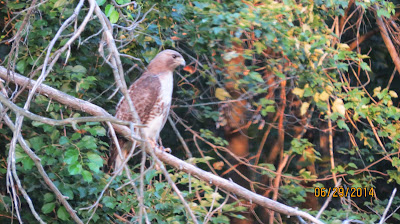 Scrambling to get the camera and muttering "Where did I put my glasses?", I headed back toward the window.

Although I've seen this big boy before, he generally hangs out a little farther down the gravel road. Handsome though, isn't he?

Our feeders seem to pick up activity early in the morning and then again around supper time.

Have you ever noticed when your feeders are the busiest?

Apparently it was supper time for us.

My Little Home and Garden said…
Good thing he didn't fly off and that you had time to get your camera. I generally miss the birds in my yard!

trav4adventures said…
Oh, he's handsome. We have a Cooper's hawk who lives in our neighborhood. I always know when he's around because the birds ALL disappear!
Cheryl Ann
July 5, 2014 at 9:34 AM

VioletSky said…
I'm glad he wasn't scared off by the 'woof'!

eileeninmd said…
Any hawk is an impressive sight.. It was nice of Moon to give you a warning and warn the little birds too. Great post and photo. Thank you for linking up, enjoy the rest of your weekend!
July 5, 2014 at 6:50 PM

artmusedog and carol (A Creative Harbor)

Stewart M said…
Always great to see a bird of prey - especially if it's in your garden!

Rambling Woods said…
Great capture and good to have an early warning system in the house.. Michelle
July 8, 2014 at 3:49 PM