One morning after I fed the dogs, I decided to thin some of the hostas we had planted on top of the stonewall in the back. Spreading nicely in the few years we've been here, they are now crowding out some of my perennials, which is not good.

I began to dig.
It began with one...
then another...
then another and another.
Pooped and a tad overwhelmed gazing at the overflowing wheelbarrow,
I realized that now I had to plant them!
UGH! 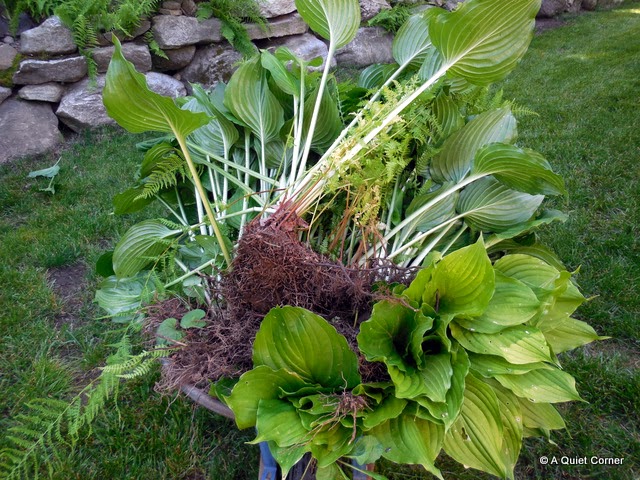 Can you guess what the Pres did when he got up? 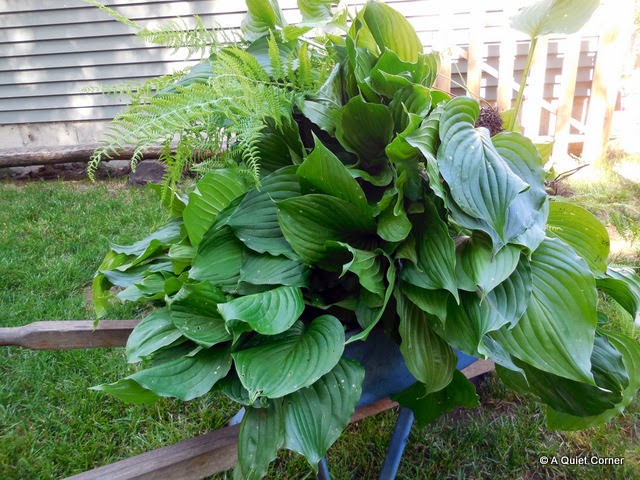 This time it was his turn to dig.
Now planted along the fenceline in moist rich forest soil,
they should do equally as well. 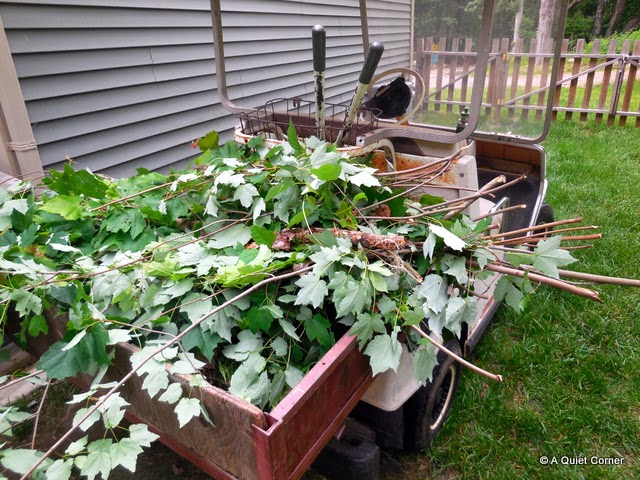 Noticing that a few trees needed trimming during the relocation, I got out the trusty lopers and continued to take in the fresh air, while the Pres went in the house and cooked us an AWESOME breakfast!

Sharing an over zealous morning with you and those at

When are you the most energetic...morning or evening?

TexWisGirl said…
you do find ways to stay busy!

Linda said…
Great healthy hostas! That I can't grow down here in our yard. Too much sun! As for energy and enthusiasm for gardening, it used to be mornings. But everything is so damp from the humidity and dew that I can't do my weeding or lawn cutting. So now I go out in the late afternoon/early evening. Darkness makes me quit before I am worn out completely. Linda@Wetcreek Blog
July 10, 2014 at 8:49 AM

Betty said…
I drag in the morning. I am definitely not a morning person. However, if I make myself walk I am immediately energized. The problem is that it's so hot and humid here I have to drive to the mall to walk in A/C comfort. I can't imagine doing yard work this time of year. I water my plants in the evening. I try and do yard work in April and October...those are the months where the humidity goes down and the temps are good. We tend to hibernate here during the summer. This is when you all get out and we go inside.
July 10, 2014 at 9:42 AM

Thecreativeme23 said…
I love days like that...had one myself the other day..but I took my splits to the new house!! I gotta have a garden over there!

MadSnapper said…
I am exhausted watching you work.. make that listening to you work or would it be reading you work.. good job
July 10, 2014 at 12:50 PM

Ginny Hartzler said…
Sharing the workload is a good thing! You dig up, he re-plants! The Hostas are really blooming here, they are all over town.
July 10, 2014 at 1:38 PM

valerietilsten59.blogspot.com said…
Hi JP.
I don't know that plant hostas.. it looks green and pretty.
Nice of the pres to make breakfast.. always good when someone else cooks for us.!
Myself, I am at my best in the morning.
During this hot days.. i like to get our early around 7am and water and enjoy the early morning.
I even try to get to the shops before 9.. then come home. I like the mornings.
happy gardening.
val xx
July 10, 2014 at 5:18 PM

Margaret Birding For Pleasure said…
Love the stone fence and well done for doing all that work.
July 10, 2014 at 6:32 PM

Beatrice P. Boyd said…
Morning are best for me as well, JP, because getting to the Y early is my goal. Around here, we save yard work for later in the afternoon because it's either too wet from overnight dampness or too hot and humid until late afternoon.
Glad you figured out the brake light problem...when all else fails, read the user guide or owners manual or check online.
July 10, 2014 at 7:14 PM

diane said…
Wow!
All that BEFORE breakfast???
I'm impressed!!!

Judith @ Lavender Cottage said…
Sometimes we just need to get at those jobs we keep putting off. I'm most energetic in the morning but we had a day likes yours today and I had to carry on until afternoon. I had to rest up to find the energy to shower but did and went for a pedicure I'd booked which was a nice reward.
July 10, 2014 at 9:38 PM

cynthiasreyes.com said…
I feel tired just thinking of your morning!
Your hosta look so healthy and they are such vigorous growers. I hope they do well in their new spot.
July 11, 2014 at 9:06 PM