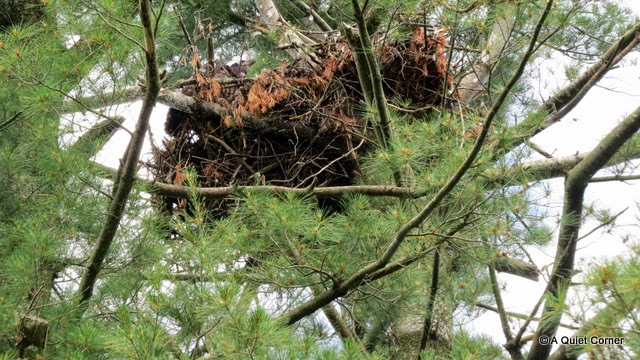 Do you see it?
Clinging to the rim of the nest, the eagle chick hugging the left side of the nest as always??  This pic was taken the 20th of June.

It has been monopolizing this side of the nest ever since it was old enough to drag itself up to the edge.  After observing them last year and this year, it seems I can spot them a long way off.  It's as if I can tell where they are. 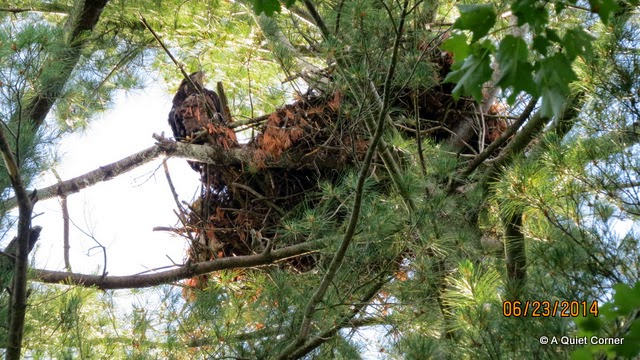 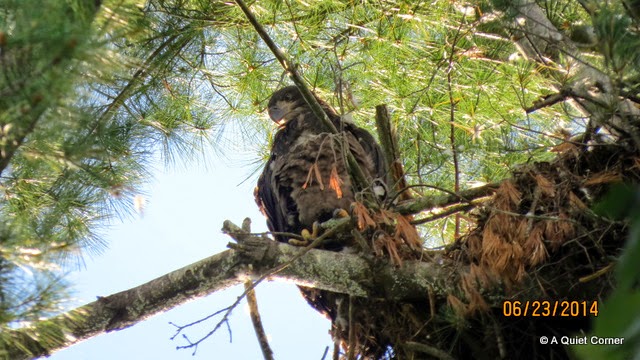 Three days later, the chick had begun branching and I got these pix!

As I stood motionless, clicking away, it looked everywhere long before it ever looked down. I was able to get about ten decent shots of it before it noticed me. Then I headed for the home.  No adults were in sight even though I was there about ten minutes.

My observations have been done twice a week to try and determine a fledge date.   According to Kate, I should use that for future reference in "my field notes".

GULP!...said I reading the line repeatedly...

So lately I've begun to jot things down and made a few adjustments to my camera for record keeping purposes.  Okay, so forget me and my field notes.
Lets move on... 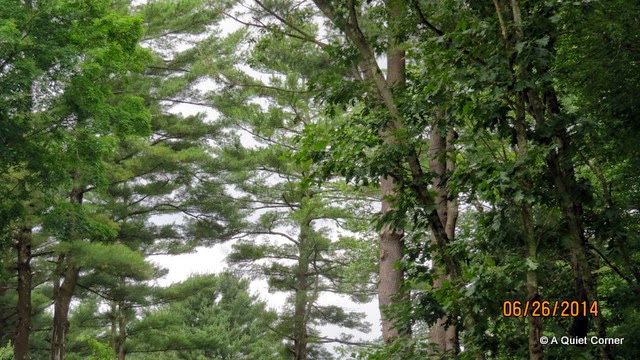 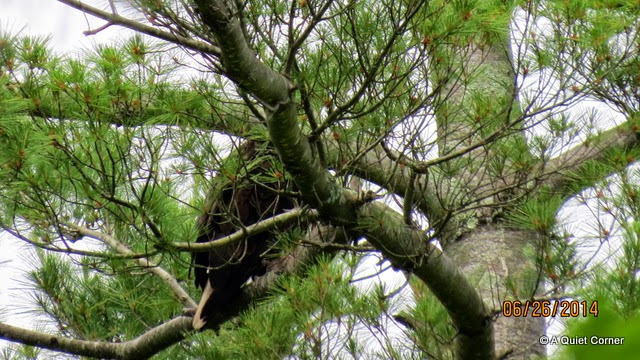 Six days later...
There it (the adult) was again... perched in the pine overlooking the river and rolling hills in the distance.

Making myself comfortable on the ground, I took about ten photos then moved on slowly to see what the chick was up to.  The adult never moved from it's perch.

Still comfy on the branches (which is where eagles prefer to be rather than in the nest once they master branching) and looking as strong as ever, don't you think?
Actually, eagles prefer to branch and roost in clusters. 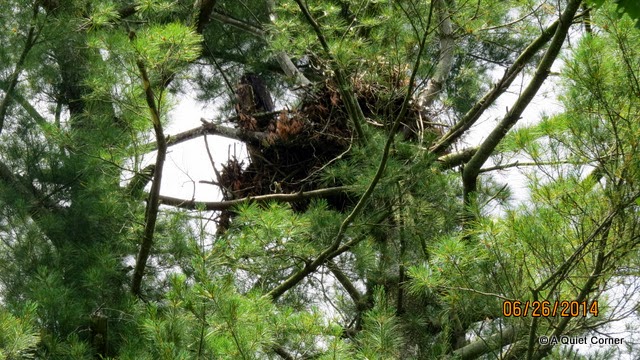 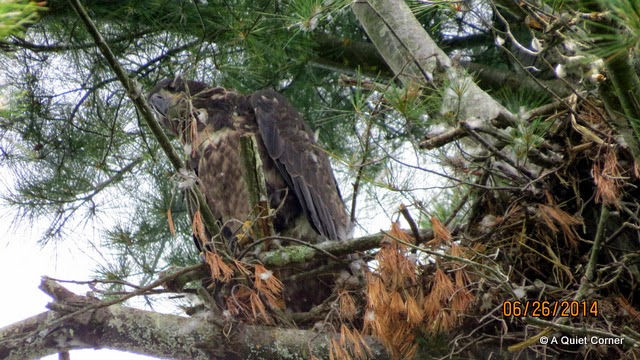 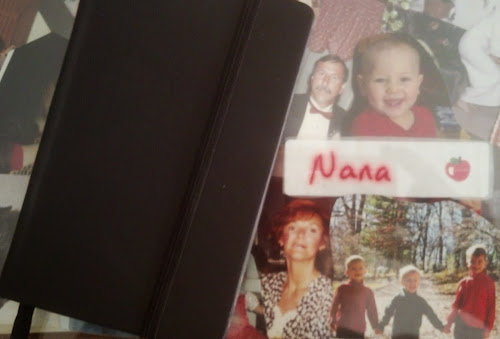 As of today, it has fledged!

It really is remarkable that they are almost on the same schedule as last year. Of course, once the chick fledges, the fun begins.Then I get to look at the sky, watch them soar and record it in my field notes!

Sharing a hot chick, some field notes and my new journal with you and those at


One more thing.  Please note the pic of me when I was a redhead and the Pres in his tux...handsome devil, don't you think?

Carole M. said…
great to witness! Field notes...yes something that is easily forgotten when it's photos we're after
July 2, 2014 at 4:59 PM

eileeninmd said…
Love the awesome shots of the juvenile Eagle.. What a treat to be able to watch them grow.. I am not that serious of a birder to take field notes.. Great post, enjoy the rest of your week!
July 2, 2014 at 5:09 PM

Ann said…
I was thinking the same thing as Sandra. Your blog has pretty much been your field notes since you update us with the progress.
Fascinating stuff
July 2, 2014 at 5:21 PM

Felicia said…
such an amazing process your have recorded in your "field notes". hehehe, you are so lucky to be able to observe the eagles.
July 2, 2014 at 9:34 PM

Angela said…
That is so exciting to get to see the baby eagles up close like that! I watched a web cam of a nesting pair of eagles last year and loved seeing what great parents they were.
July 3, 2014 at 12:11 AM

Margaret Birding For Pleasure said…
Fantastic opportunity to see these majestic birds and their chick at its nest and then to see it fledge. Great series and shots.
July 3, 2014 at 1:18 AM

Karen thisoldhouse2.com said…
Great capture!! and definitely one good looking couple! I just realized I have no idea what you "look like", JP. :-)

A Colorful World said…
What a wonderful priviledge to see these nesters two years in a row! Glad you took such great documenting photos, and hey I'm sure you'll remember most everything for your catch up on the field notes! :-)
July 3, 2014 at 9:56 AM

Rambling Woods said…
Love the hair and the tux.... Field notes or journal notes are the same thing. As much detail as you want in them
July 3, 2014 at 4:43 PM