The New Kid On The Block

When I walked into the woods last Friday, the chick was squawking hungrily. It had been crying on and off for several hours that afternoon, which made me wonder just what was going on.

However, approaching the edge of the clearing, it's cries stopped. Total silence meant he spotted me, I thought. I sat and waited for a long time before I finally heard it cry again. When you're in the woods, sound reverberates yet I knew the sound was not coming from the nest nor it's branches. The sound was beyond the cluster of pines...about thirty feet away from the nest!! Spotting him immediately, these are the best I could get since the young fledgling was hiding behind the pine branches. 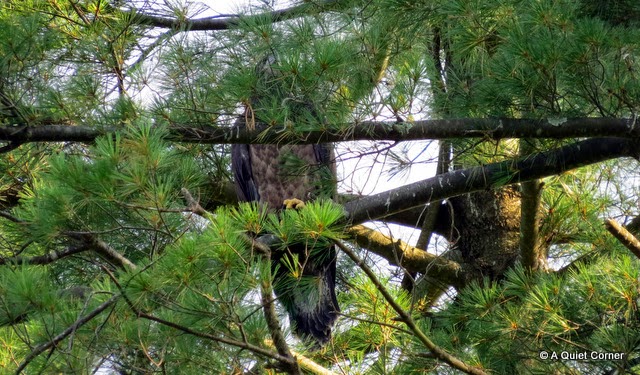 Introducing the fledgling...the
new kid on the block 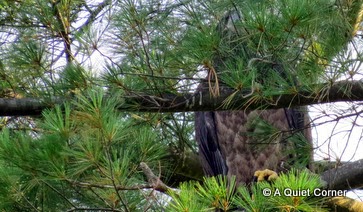 This is the first time I was able to get a picture of any of the immatures perched and away from the nest!! When I emailed Kate, she too was pleased.

After it picks up more flying and maneuvering skills, hopefully I will catch it soaring over the treeline and our yard. Now the education comes...not for us...for the immature. Observing it's parents and other eagles as it begins to venture out into our world, it will learn to hunt and fend for itself. Until it's skills are mastered, it will cry and beg hungrily for food from it's parents.

Did you know that in the first few months many immatures perish?

When I checked out the base of the nesting pine, there were several skeletons scattered on the ground, mostly around the back side of the tree cluster. Judging from the remains I found, the immature has been fed well, wouldn't you say?

Margaret Birding For Pleasure said…
HI it was great that you hear him, then found him and was able to get these photographs. well done.
July 23, 2014 at 7:47 AM

Anonymous said…
What a stroke of luck that you were able to catch a photo of the little guy out of the nest. Salmon for dinner...sounds good.
July 23, 2014 at 7:58 AM

Judith @ Lavender Cottage said…
That darn branch obscuring his head. :-) How gratifying for you to continue following the health and status of the new kid on the block.
Thanks for sharing.
July 23, 2014 at 8:33 AM

MadSnapper said…
he really looks healthy hiding in the pines.. and the leftovers are proof the parents are great hunters...
July 23, 2014 at 11:41 AM