On Thursday, the Pres had made arrangements with Luke (the neighbor down the road) to give him a hand with a few chores at his farm. Luke would pick him up around 6:15 pm. That was the plan. We'd been busy working in the yard all day...me in the gardens and the Pres with the lawn.

Supper was easy that night. We ate leftovers. The Pres made his plate before I made mine since he was leaving at 6:15 which is just when the doorbell rang. There stood Luke and Laura, who insisted that I was coming along too.

Barefoot and flabbergasted, I told them I hadn't even brushed my teeth, they said, "Well, hurry up then!" Before I knew it, I was on my way to their sixty acre farm.

First, however, we had to stop at John's, a friend of Luke's, so they could give him a hand putting the cap back on his pick-up. Meanwhile, Laura and I chatted with John's wife.  We were all on schedule until John's wife asked about the eagles.

When someone raises that subject, I could go on forever, as you know.  Needless to say as John's wife asked me questions, I answered.  She asked. I answered. She asked. I answered. Get the picture? Time was just a ticking away and the sun was getting lower and lower in the sky. "YIKES, we have to hit the road or we'll never get what we need to get done, done!" Climbing in the SUV, the four of us headed to the farm.

Pulling in the driveway and seeing the farmhouse, I realized how much love and work Luke and Laura had put into it. Well manicured grounds around the house and in the distance, fields separated by fences, I could see how well maintained it was. 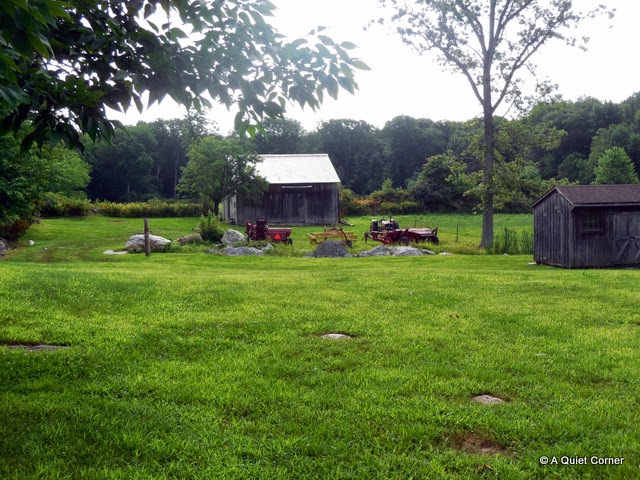 Driving across the fields in the SUV toward the shed, I asked Luke if that was really a smart thing to do.

Replying confidently that he knew "this land like the back of his hand because this is where I grew up," we continued to weave in and out around rocks and holes.

Stopping so I could snap a pic of the doe nibbling in the far field, he made his way through the tall grass and around the stonewalls. It was already dusk. 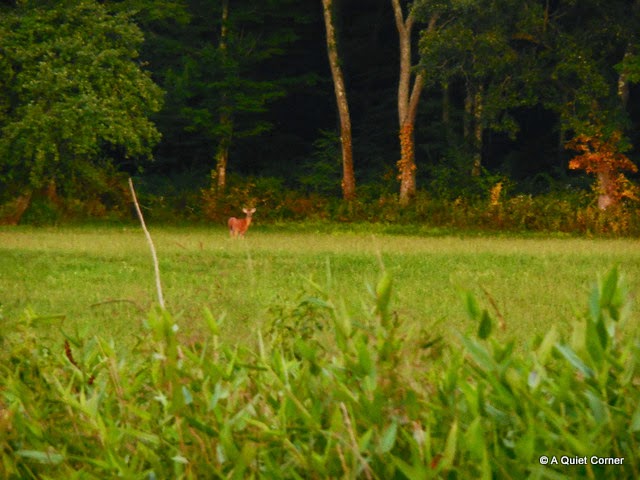 Once back at the house, the Pres and Luke went right to work in the basement while Laura began wiping down the bathroom floor on her hands and knees. Closet doors removed, bulbs changed, shower head installed, the list was nearly done. Running room to room, I manned the faucets so the boys could adjust the water pressure, one of the last tasks. It was now pitch dark...around 9:15pm I would guess.

Walking out and closing the door behind me, I told Laura to come lock the door with the key still in the lock from when we arrived. The next thing I knew, just as I was about to climb in their SUV, Laura was behind the wheel and the SUV was moving!  Driving over the timbers that separate the driveway from the lawn, she headed toward the blueberry bushes. What in the world? I thought.

Can you guess where the Pres and Luke were? 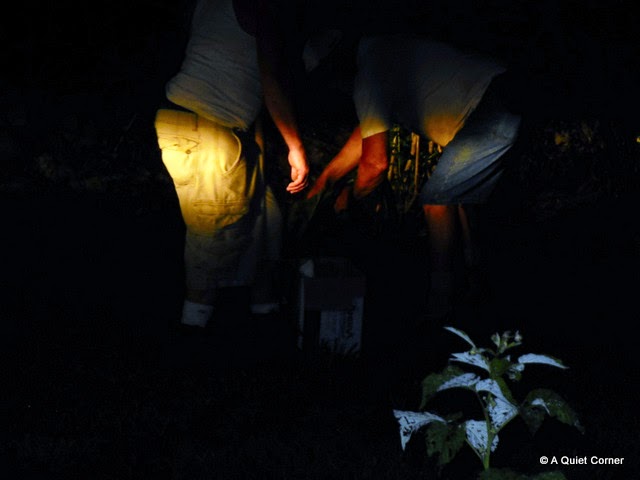 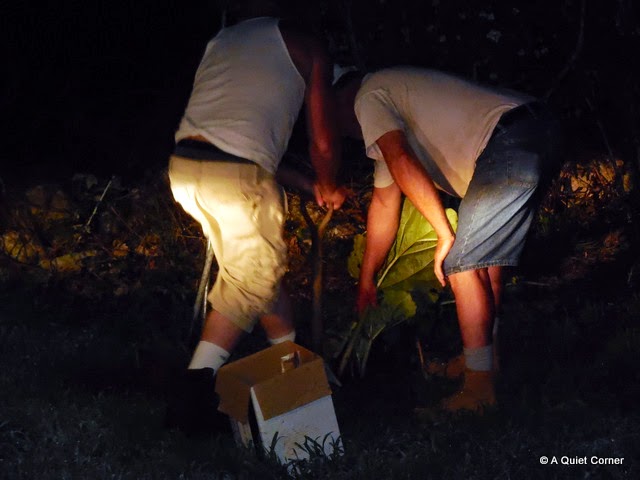 They were raiding the rhubarb patch...
in the dark!!

Luke and Laura told us they would give us rhubarb.

And friends
always do what the say!

Bee Lady said…
What great friends you all are! I miss my rhubarb but I'll have another one someday. I just knew you were going to say you ended up in a hole somewhere driving across that field!

Buttons Thoughts said…
Oh what a wonderful day you had. Luke and Laura sound like my kind of people. Rhubarb I miss it. Hug B
July 31, 2014 at 6:59 AM

TexWisGirl said…
what a lovely place they have! yum! rhubarb!

Anonymous said…
Maybe you'll get some of those blueberries when they're ready as well. Mmmmm...blueberries.
July 31, 2014 at 8:19 AM

eileeninmd said…
Wonderful story and photos! I have never had Rhubarb. Enjoy your evening and the weekend!
July 31, 2014 at 6:35 PM