That Friday began like so many others. Dressed and now ready to head out to the gym, I heard the Pres, who was up much earlier than normal. When we exchanged "good mornings" he told me he was heading out to his daughter's to butcher the deer he'd gotten the night before. Parting ways, we said we'd touch base mid afternoon.
Yes, life is good, I thought.
~~~
I heard something odd as the old of the old Wrangler slammed shut but didn't think anything of it.  I heard it again when I got out but it was when I went to get into the Wrangler after my workout that I was taken by surprise.

The door wouldn't open. Inserting the key in the lock and turning it did nothing. It was locked and wouldn't unlock!  I thought, Thank goodness I had the soft top on! Besides I could always climb over my kayak, protruding from where the back window should be.  Since it took up a good part of the back and rested on the front passenger seat secured near the glove box, that would be a rough climb in. 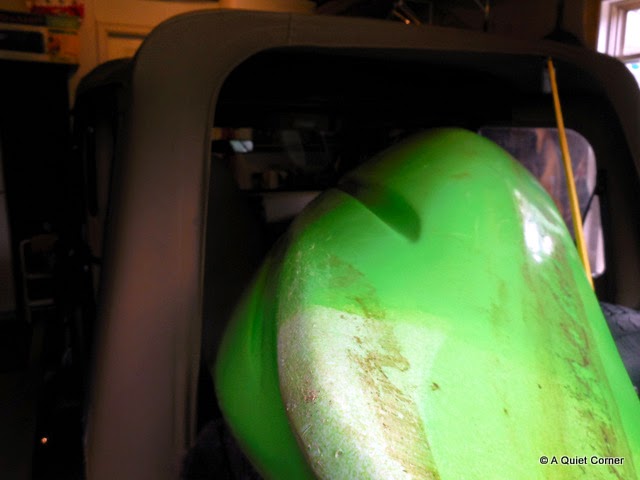 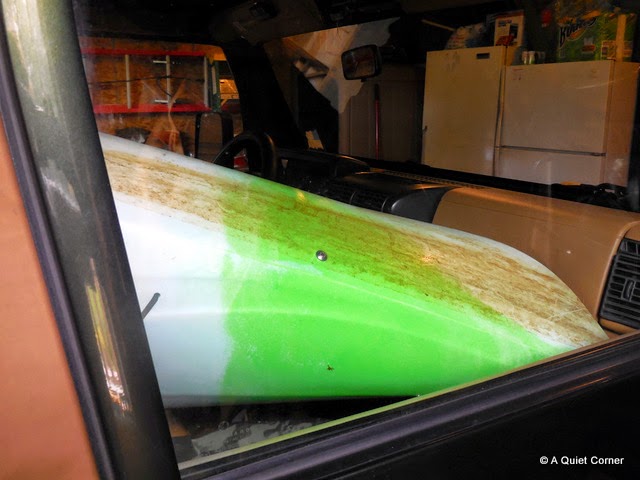 Ahhh...this looks more manageable.  Besides the driver's seat is just a hop, skip and jump. 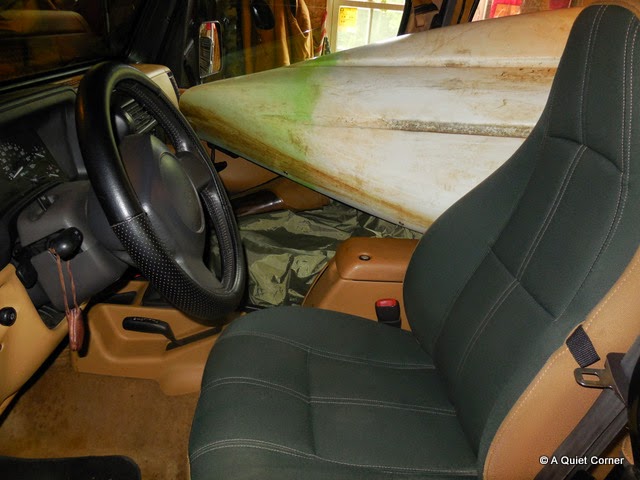 Deciding that climbing over the wide nose of the kayak from the passenger side was my easiest route, I walked around inserted the key and turned. However, unlike the driver's door, it opened. Thank goodness, I thought. Now all I had to do was climb over the kayak and the gear shift...after my workout, no less!!

Now in the driver's seat, I once again tried the door and the lock.
Nothing...no good...
which meant I had to climb out the way I climbed in! 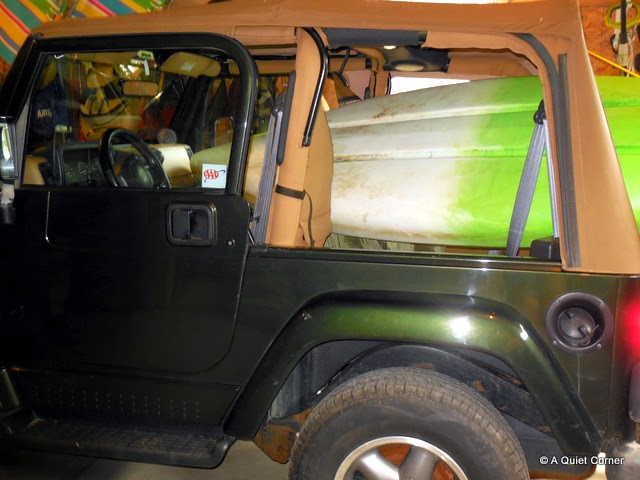 Have you ever been shut out?
Email Post
Labels: Vehicles

Anonymous said…
Yes indeedy...I was shut out of my apartment years ago....the hubs got home before me with my keys...locked the door...and because he is quite deaf he couldn't hear me banging on the door. I went to the neighbours to call him and he couldn't hear the phone ringing... I ended up getting the super to let me in. Still riles me up just thinking about it.
August 23, 2014 at 5:28 PM

Willow said…
I lock my self out of our old farm house about once every three months ~ Yup we have a key hidden outside but when I lock myself out I then usually forget to put it back . If it's in the hot months and a window is open I climb on in ( not a pretty picture either) !
August 23, 2014 at 5:33 PM

Linda said…
Good thing you work out and are so agile. With my fluffy figure I wouldn't have made it! I remember a couple of times being locked out, but the best one was when my 2 year old son locked me out of the house. I was out in the backyard, and he was inside the washroom inside the house. We could see each other, and I promised him an ice cream if he opened the door. The bribe worked! Linda@Wetcreek Blog
August 23, 2014 at 6:31 PM

Sandra said…
only once in my life i was shut out, i locked the keys in the car with the car running and it was pouring rain. came out of work, jumped in the car, popped the trunk. my friend drove up, i transferred a bag of books to her car, went to get in and there it was, running in the rain. i called home and bob came with his keys
August 24, 2014 at 5:46 AM

Ann said…
a few years ago I might have been able to accomplish that but now I'm not so sure I could have managed climbing over that kayak and getting into the drivers seat. Even if I did I doubt that I would have made it back out...lol
August 24, 2014 at 6:21 AM