Half Light Half Dark

Sharing with you and those at Our World Tuesday 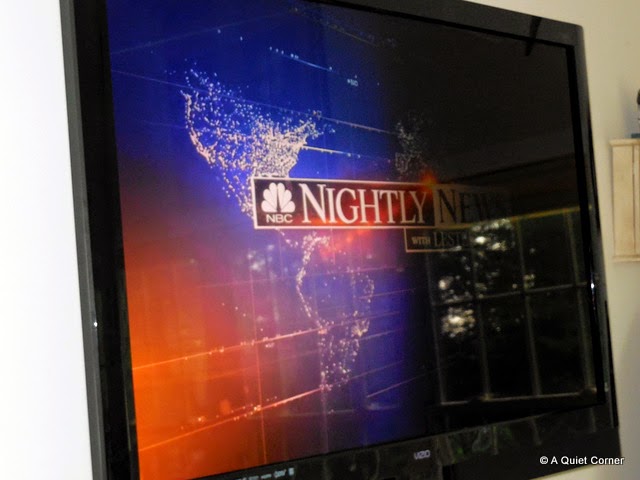 It happened suddenly.  We were watching television and there it was.  The right half of the screen suddenly grew dark.


For a few days, we did nothing but try to determine when/why it occurred.
Was it every channel?...YES.
Did it happen all the time?...NO.
Sometimes it was fine for two hours or more.  Sometimes longer.
Was it there when you turned the set on?...SOMETIMES
Trying to decipher whether it was the TV or the cable, we continued to "play."
Yet we knew that if it darkened when we watched a DVD, it was the TV.
Yep, dark on the right side.
Was it still under warranty?...NO.

The Pres loves...more than you know...this television.  The resolution on it is 10,000,000:1.  The picture was so incredibly clear that it seemed like the horses were in the great room when we watched an old Western together!

So this has been our world lately.
Half light, half dark.

A new one is being delivered today.
Let's hope the Pres loves it as much...:)
It is his world.
He's admitted to me that he's a TV addict.
That's the first step, right?

?Are you a TV junkie

MadSnapper said…
we both are TV addicts and have one like this and when we bought this one it was because the old one stopped TALKING perfect pic no sound. it needed a sound board and the board cost almost as much as a new TV so we sold the old one to the repair man for 200 cash and went and bought a new one... i want a 50 inch smart TV oh yes i do. did you get a smart TV?
August 5, 2014 at 7:33 AM

Anonymous said…
We are beginning to think it doesn't matter what kind of TV you have...there isn't much worth watching anyway.
August 5, 2014 at 7:47 AM

Mimsie said…
That is so weird. I've not ever heard of that happening before.
I am not a TV addict and watch it as little as possible but love my computer. Hubby does enjoy TV and watches quite serious programmes at times. I have no idea if our TV is special or not but know it is a Sony digital and gives us a great picture. I am not into technology and as Delores says "there isn't much worth watching anyway." We mainly watch DVDs of old shows we used to enjoy or the occasional film.
Hope your new TV is going to be appreciated by the Pres.
August 5, 2014 at 7:51 AM

Karen thisoldhouse2.com said…
Never heard of that happening before!

And no, we're not TV addicts, although we love a good series or a great movie. And sports... *sigh* baseball and football..seems their seasons never end around here.

Judith @ Lavender Cottage said…
Ugh, sounds like the TV is dying a slow death. I don't watch a lot of television, reading or crafting is my thing. Of course my hubby is like yours - sports, old movies and old sitcoms.
August 5, 2014 at 8:36 AM

Linda said…
My husband is the TV watcher. Even if he sleeps through half of "his shows." When we got a huge screen, I delegated it to the study. So glad I did that. Now I can have the living room without a big black shiny rectangle to distract me or our guests. Do I watch TV? If I have to! But not much. Linda@Wetcreek Blog
August 5, 2014 at 9:03 AM

Ginny Hartzler said…
This is a strange thing! So sorry, but maybe he will love the new one even better. I want a full report tomorrow, how big? what brand? Etc. I see Sandra's comment and never heard of a smart T.V. I do computer in the day, then all evening we HAVE to settle back and watch our shows, of which there are many. I record them all on the DVR box, we can record up to five at the same time.
August 5, 2014 at 9:39 AM

i have noticed that there are wear spots ... not sure if that is the right word... but like when you watch the news & you have those "crawl lines" (that is the right word, it think?) always going along the bottom of the screen with more info of what is going on in the world news ... & you can see if even when the pic has moved on a commercial & what not ... makes me wonder when the tv with decide it needs a big old break??! the hubby always tells me not to let the screen burn - turn it off but i wonder if that does any good. i think it has a mind of it's own & will die when it is time, or when it thinks it is time. that kind of thing?! we will see. ( :

i wonder why they don't make the tvs long lasting. seems so wasteful. same with other tech items. i love the recycle but ?? it seems very tough with some of our items ...

Monkeywrangler said…
We had a monitor/tv screen one time that was losing it's color resolution. The cololr was horrible, but DGH wouldn't get a new one, until on night we rented "300" and he finally saw how off the color was, and admitted we needed a replacement. It was funny actually.
August 5, 2014 at 12:48 PM

MorningAJ said…
A few years ago our TV turned green. Everyone looked like Data out of Star Trek Next Generation. We use a computer monitor now and it's very good colour and clarity.
August 5, 2014 at 1:24 PM

Black Jack's Carol said…
No, I'm more of a photography junkie but this was an interesting peek into your world (and the chief's). Hope the new TV is a success!
August 5, 2014 at 5:52 PM

Ann said…
That's really odd. I've never heard of a tv doing anything like that before. The whole screen going dark yes but not half of it.
Is that a Vizio? That's what kind I have I hope I don't have the same problem.
I don't watch as much tv as I used to but I still watch a fair amount if I can find anything worth watching
August 5, 2014 at 8:18 PM

Rambling Woods said…
We recently got a decent tv... Couldn't believe how great the picture was
August 8, 2014 at 7:42 PM